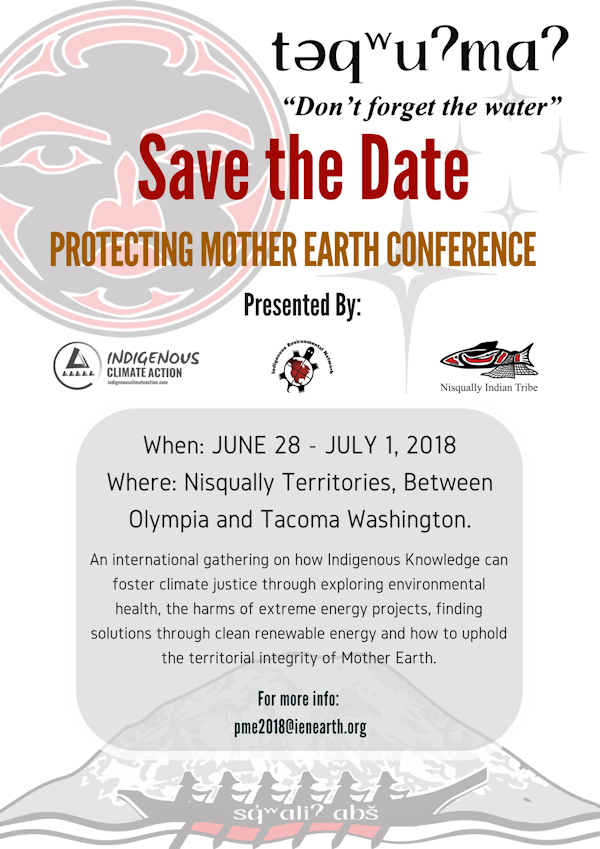 The Indigenous Environmental Network will once again present The PROTECTING MOTHER EARTH Gathering. This year’s conference will be hosted by the LSqualli-Absch, the Nisqually People (People of the River, People of the Grass) and held within the territories of the Nisqually Nation, near Olympia, Washington – Co-hosted by Indigenous Climate Action, a coalition of Indigenous Peoples representing different organizations and communities whom have a shared vision and mission to provide Indigenous leaders with knowledge about climate change and climate policy.

From the Bakken oil fields to Standing Rock, and to the Bayou Bridge, from the Canadian Tar Sands to the Keystone XL and Kinder Morgan pipelines, to the Northwest coastal Salish Sea, Indigenous peoples are standing up to private corporations and governments that want to treat their ceded or UN-ceded territories, waters and lands, as a sacrifice zone for profit. Native Nations have inherent and the legal rights to decide what happens to their land, their waters, air, sacred sites and the climate.

The Protecting Mother Earth (PME) conference 2018 is being held in the Nisqually Nation territory, near Olympia, Washington. The four-day outdoor conference will be held at the location known as Franks Landing adjacent to the WA He Lut Indian School. The Nisqually are known as the southern Coast Salish people. The conference is a call to action for Indigenous peoples of North America to build narrative and action leading to a response to the protection of Native rights, treaties and the protection of the sacredness of Mother Earth and Father Sky

The time is now to deepen cross-movement alignment and further articulate a just transition framework to build restorative justice and expand Native concepts of Native community-based solutions, climate justice, energy democracy and popular movement building. While doing so we work toward a just transition to sustainable livelihoods.