There Goes the Neighborhood: screening and discussion [Olympia] 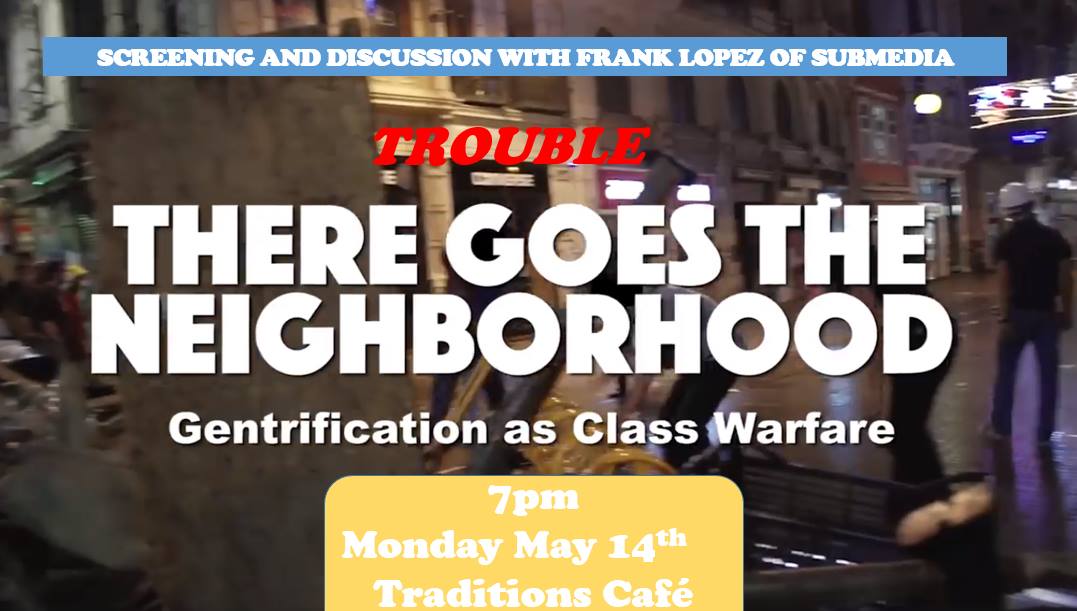 Hosted by the Black Cottonwood Collective

Join SubMedia’s Frank Lopez for a screening and discussion of the latest epidosde of Trouble!
TROUBLE # 12: THERE GOES THE NEIGHBOURHOOD
In cities across the world, established urban environments are being transformed according to the dictates of capital. Gentrification is destroying the social fabric of working-class and racialized districts, displacing long-standing residents in order to make way for a new class of upwardly-mobile, and often white professionals – who often view the rich local histories of the spaces they move into as nothing more than kitschy branding appeal. The culture clash that emerges between established community members and these new arrivals is often viewed as the front-line of struggles around gentrification; a quarrel between patrons of a locally-owned roti shop, and those of a new craft beer pub; or a battle between NIMBY condo-dwellers and the beneficiaries of a local social service agency.
But while this tension is certainly real, it is only the tip of the iceberg. Gentrification is a systematic process, facilitated by state, regional and local governments and bankrolled by massive financial institutions managing multi-billion dollar portfolios. It is class war playing out in physical space, with all the complexities and contradictions that entails.
In this month’s episode of Trouble, the first in a two-part series, sub.Media examines gentrification as a process of capitalist urban development, by taking a closer look at how it is playing out in three mega-cities: Toronto, New Orleans and Istanbul.

Frank will be hosting a workshop at Evergreen earlier in the day in video production and editing. For more information on how to sign up email [email protected] and check out https://www.facebook.com/events/588711404831957/