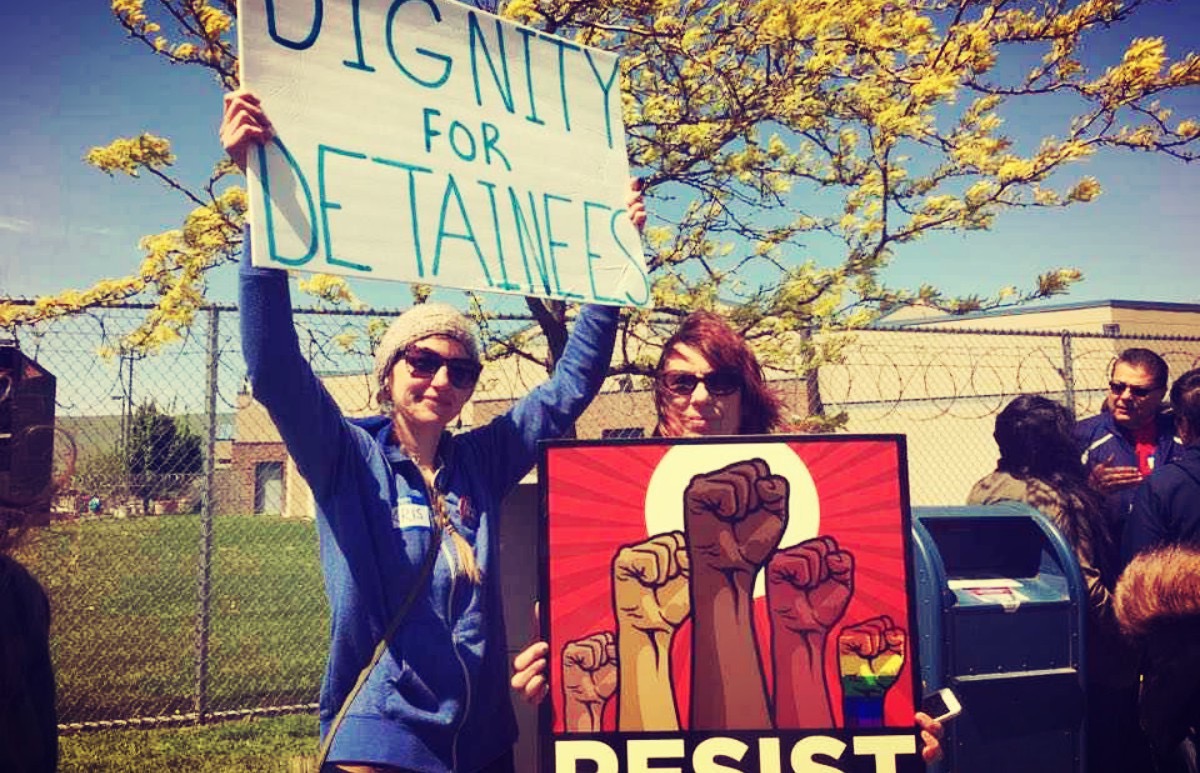 In the last week, we’ve seen a successful hunger strike take place at a detention facility in Northern Oregon, and another pop off at a prison in Indiana. With other uprisings, strikes, protests, and actions happening across other US prisons, we should all find ways to support ongoing organizing and solidarity efforts.

In Tacoma, protests continue outside of the Northwest Detention Facility, the site of several previous hunger strikes. In May, we interviewed an organizer supporting hunger strikers on the IGDcast. Northwest Detention Center Resistance has continued to maintain a presence, keep up support, and also held a Day of the Dead celebration outside of the facility. On November 11th they are holding a rally, so please support them, follow their page, and see how you can contribute to their work.

In early November, a hunger strike broke out at the Norcor County Jail in Northern Oregon, at the Northern Oregon Regional Correctional Facility. The hunger strike was launched on October 31st, and ended on November 4th and involved 20 people, with people from the community also demonstrating outside in solidarity.

Splinter News discussed the start of the hunger strike:

A group of at least 20 undocumented immigrants being held by the Immigration and Customs Enforcement Agency in Oregon have gone on a hunger strike to protest the conditions at their detention facility—but the man overseeing the facility is literally laughing off their protest.

The strike, which began Wednesday, marks the second time this year that detainees at ICE’s Northern Oregon Regional Corrections Facility have fasted to protest what they say are abysmal conditions. According to KGW.com, the detainees are asking for better food, cheaper items for sale in the commissary, including feminine hygiene products, and cheaper phone calls—a particular concern at NORCOR, thanks to its remote location and strict visitation policy.

“I have heard the stories of vulnerable people living under conditions that are intolerable,” John Boonstra, a member of the Gorge ICE Resistance activist network, said in a statement to Willamette Week. “Hunger strikes come at great risk to people who are already isolated for indeterminate amounts of time.”

According to the ACLU of Oregon:

In the second hunger strike at NORCOR this year, detainees refused food to bring attention to poor conditions at the jail including inadequate food and poor nutrition, the high cost of commissary items, unaffordable phone and video calling rates, lack of in-person visits with family and friends, lack of access to any outdoor space and exercise, and inadequate library and activities.

Yesterday, detainees reported feeling weak after four days without meals, but were committed to seeing their demands addressed. ICE officials met with the hunger strikers Saturday afternoon after the group requested medical attention for a detainee who was doing poorly. The detainees agreed to end the strike when ICE officials committed to allow detainees three hours of free video calling every month, milk five days per week instead of one, hot breakfast on the weekends, the ability to wear warm underclothes and shoes as the jail only issues scrubs and sandals, improved library options that include books in Spanish, and access to actual outdoor yard space instead of the current small concrete recreation room with a partially open roof.

The Rural Organizing Project posted on Facebook declaring victory in the strike:

“All together we won!” is the message we just received from hunger strikers at NORCOR jail in The Dalles. A jail administrator visited hunger strikers today and committed to meet some of their demands in the next 2-3 weeks. Hunger strikers have won better food, more activities including one hour outside in the yard and longer tv hours, and the opportunity to wear their own warmer clothes. A huge victory! Hunger strikers also shared that they could hear our chanting at the rally yesterday! Congrats Gorge ICE Resistance and all the groups in the gorge for your incredible and inspiring work!

Meanwhile in Indiana, several inmates have launched a hunger strike in protest of horrific conditions. According to IDOC Watch:

Several inmates at Wabash Valley Correctional Facility have announced that they have begun a hunger strike to protest their deteriorating conditions. Their immediate demands include: removal from camera monitored cells, relocation from abusive staff, and the cessation of tampering with food and the confiscation, reading and withholding of mail by administration. The announcement follows a sequence of escalating problems that have unfolded in the prison for the past several months, rekindling a too-long dormant culture of resistance to IDOC policies.

For some time, the IDOC has pursued a path of repression characterized by the isolation of inmates whom it perceives as threatening to the stability of their regime of oppression. These inmates are often kept in Indiana’s form of solitary confinement known as “Secure Control Units.” Wabash Valley has taken this practice, widely recognized to be a form of torture, to new extremes by indefinitely detaining inmates in isolation cells monitored 24 hours a day through video surveillance.

The selective treatment of politically conscious inmates is not limited to isolation and surveillance, however. Prisons in Indiana have developed a parallel judicial system in which the civil protections available to free citizens are completely absent. Inmates are consistently penalized and charged with internal violations which can result in their placement in isolation or loss of “good time” which by Indiana Code cannot be regained. In these faux-courts, prisoners are deprived of any right to representation or possibility of viewing the “evidence” used against them. Charges are often brought as a form of reprisal, beginning with disciplinary reports filed by disgruntled or sadistic guards looking to punish inmates for refusing passive obedience to their oppression.

The increasingly severe forms of repression manifest on all levels of the IDOC and affect all inmates as well. Several trends have coalesced and finally culminated in an irreconcilable crisis. The current landscape of the IDOC is the result of these trends, primarily the entrenchment at the tops levels of executive administration of old-guard prison staff experienced in the ways of prisoner abuse, the construction of prison facilities in rural, economically depleted areas which produces a situation that pits the solidarity of largely euro/ “white” communities against predominately non-euro/ “white” prisoners, and finally the privatization of all aspects of prison operation and management. These trends mutual influence and extend one another, creating an increasingly antagonistic atmosphere, resolvable only through the initiative of prisoners in taking all measures to reassert their humanity.

In response, a call-in campaign has been launched. Here is an image to share on social media if you can and organize a call in event to help prisoners.

Meanwhile, action has continued on both sides of the bars, with people in Durham taking to the streets against another death in custody, things still going down across South Carolina, and the Free Alabama Movement (FAM) releasing a new statement – so be sure to stay up with Bloc Party in coming days for more information.