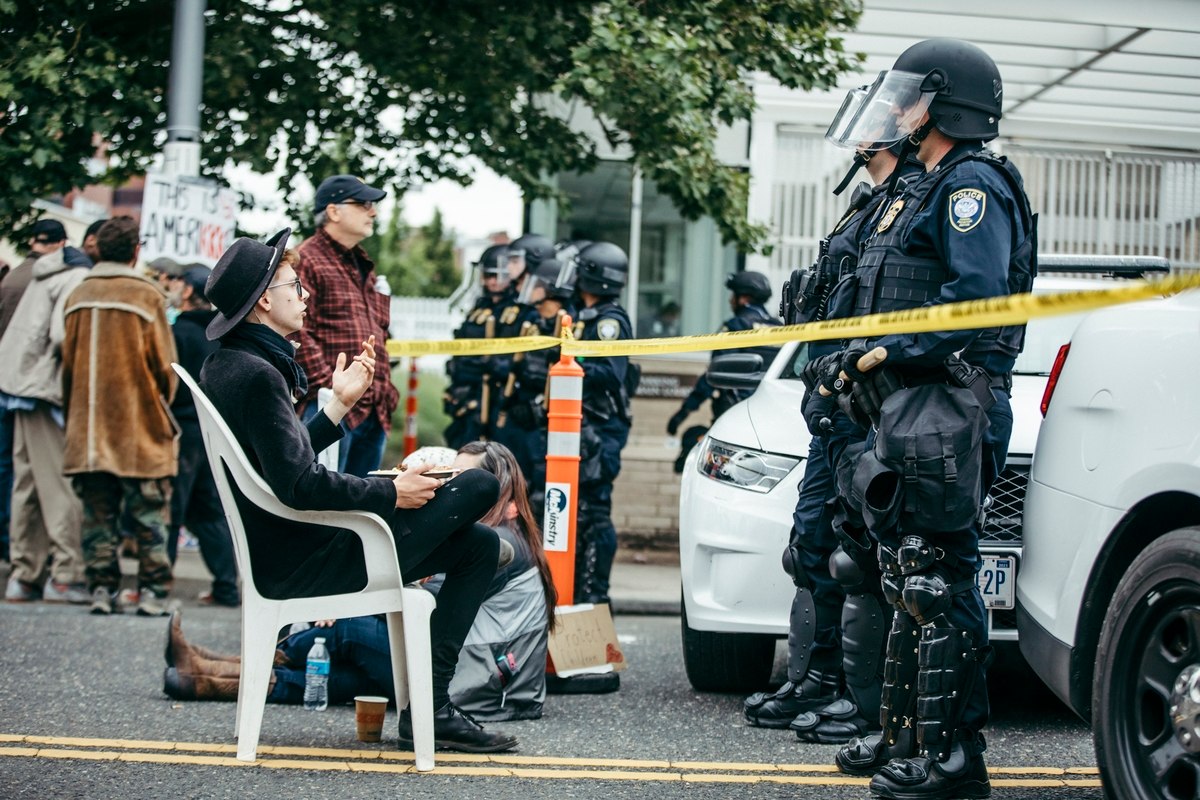 On Sunday June 17th, seven brave souls showed up to the ICE facility on SW Macadam Ave in Portland, Oregon. These seven revolutionaries decided that night to sleep on the sidewalks, blocking the ICE gestapo from their daily kidnapping and concentration camp duties. That night the call went out and on Monday our numbers surged to fifty plus. This small group of anarchists, radical leftists, and revolutionary minded folks resolved to block the ICE driveway. DHS agents threatened arrest and even pleaded with us unironically that they “just wanted to get home to their families.” We didn’t give an inch and in the coming days our numbers continued to grow.

What started out as a couple tents and a few people turned into a sprawling tent city with hundreds of people within a few days. With little to no direction or formal organizing structure, autonomous individuals took to community building. A highly functioning kitchen, med tent, child care, mental health, free store, security team, and more were flawlessly executed to create a makeshift anarcho commune. The spirit of the camp was undeniable and the solidarity in building the camp was inspiring. All the while still keeping ICE pigs from doing their job.

Towards the end of week one things began to change, many local organizers began the work of dismantling autonomous cooperation. Many committees were formed, power grabs began and undemocratic decisions for the camp were made, often excluding many of the people putting in hard work to make the camp function; despite all this the spirit of the camp maintained. Towards the end of the first week the state sent its lackeys to intimidate the camp with vague possibilities of federal charges. This information was delivered to a small group of organizers, gate-kept by some and slowly filtered out by others, leaving the bulk of the camp unable to give informed consent to the actions they were participating in. This is really the moment the shift in the camp occurred. People became nervous and the revolutionary spirit began to disappear. Whether this was a deliberate attempt by the State to dampen our resolve or a genuine attempt to help is still up for debate.

After the fear had entered camp there continued to be splits between militant factions and reformists. There was grumblings about some of the very anarchists who started the occupation somehow putting others at risk. This couldn’t be further from the truth as the anarchists here were the first to put their bodies between the pigs and the protesters.

The second week of occupation carried on but tensions in the camp continued to grow. Towards the end of the second week the ICE pigs swept the driveway and entrances in front of their building, arresting nine brave comrades. After the sweep there was a face off with the pigs that to some extent is ongoing. The camp carries on today but ICE is back to business as usual, with riot clad agents surrounding the building, and snipers on the roof.

There’s a lot to learn from this action, and it should be acknowledged that this is only part of an ongoing struggle against State power. The PDX ICE occupation was an integral part in kicking off widespread anti-ICE actions across the country, including weak-kneed politicians calling for the abolishment of ICE for the first time. This is obviously just a first strike and the war will continue to evolve and gain strength.

The greatest takeaway was seeing community members work in solidarity, with no formal structure to build a thriving commune. This can absolutely be replicated on a large scale and is a vision into what a better world could look like. This also showed how a small group of revolutionaries can shut down government business operations. More critically, we should learn from the downfalls. When organizers begin to take up to much space and gate-keep information they effectively build power structures that we are all meant to be in opposition to. When you become the cops you are fighting you have defeated your own revolution. All that being said I’m still in support of all the folks that continue to sleep on stolen land next to the ICE building but for this movement to succeed we will need to grow, adapt, disrupt, and stay rowdy.