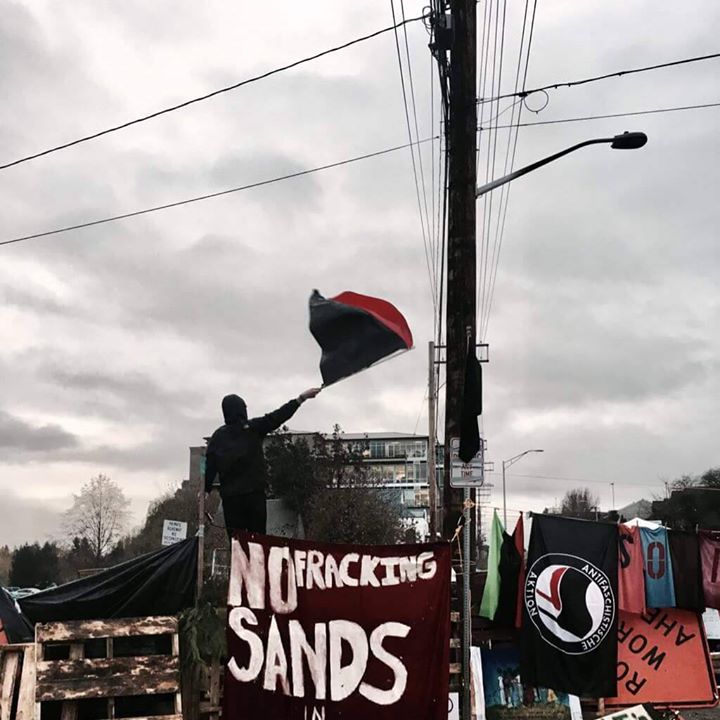 disclaimer: this statement, as with every other statement released by accomplices within the olympia stand, does not represent the views of the blockade as a whole. the ideologies, intentions and identities that constitute our blockade are diverse, and will not be neatly consolidated. as of the time this message is being written, no consensus has been reached on the subject of demands or points of unity outside of the intention of blocking the shipment of the proppants present in the port.

when i say this, i am not speaking for the camp, but rather about it, from a singular perspective i might add. the distinction may seem small, but in reality it is not.

while those present are unified in certain regards, we are diverse in others. it is the strong opinion of this writer, as well as at least a few others within the camp, that this simple fact does not constitute weakness, or hinder our movement, but instead is an invaluable asset to our attempt to build an autonomous community.

i, for one, greatly prefer the lively debates and greater autonomy of an ideologically and tactically diverse group to the imposition of a false unity.

this is not to say that unity cannot, or will not, grow. to the contrary, i believe that the camp’s solidarity grows stronger every day, and that our points of unity are being articulated in an organic fashion as we build our movement, express our differences and discover new convergences. this may not be fully palpable to the public right now, but it is a process that i (as an individual) have been noticing since the very beginning.

one especially noteworthy presence within the milieu is an indigenous caucus, composed of many experienced organizers. it is my personal hope that their wisdom and guidance is heeded and aids us all in building a more powerful and meaningful unity that is truly our own.

to members of the media/ general public: none of the communiques that have previously been issued from members of the blockade represent the community as a whole. if you are a member of a media outlet that has broadcast any sort of transmission from our camp, please take any measures that you can to make this clear to your audience.

to anyone releasing any sort of statement about the encampment: please, please, please preface your statement with a disclaimer that you are not speaking for the group as a whole. in addition, please make sure that your messaging is composed in a manner that is conscientious to the fact that you are speaking only for yourselves. false representation is all but inevitable within the realm of contemporary media, but still, please do your part to reduce your complicity to this as much as possible.

to everyone who has participated or aided the blockade in any way: thank you so fucking much. this blockade has been truly exhilarating. opportunities such as this are rare, and have a power that i do not think we can be fully aware of.

– a singluar becoming-haecceity/ whatever-being, who (once again) is in no way attempting to speak for the group as a whole