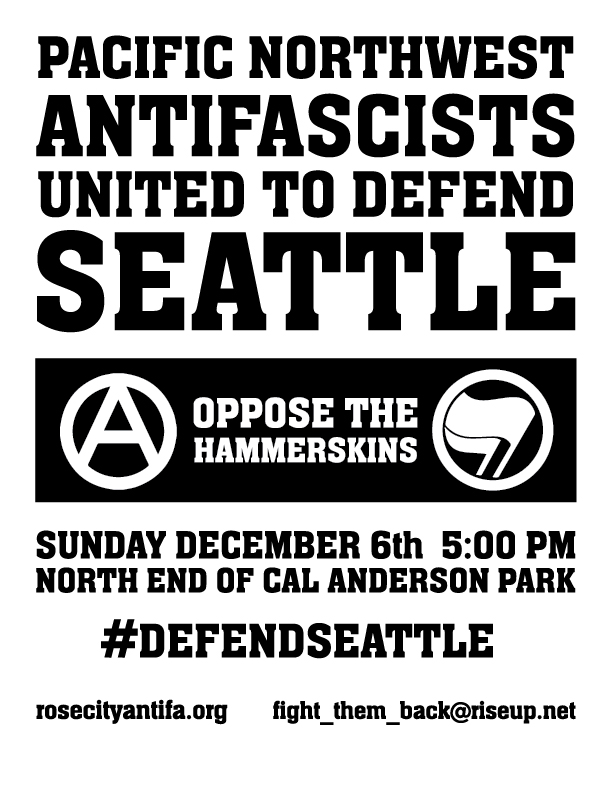 Rose City Antifa and allies are calling for antifascists in the Pacific Northwest to turn out this coming Sunday December 6th to Cal Anderson Park in Seattle, WA to show the Northwestern Hammerskins that we stand united against fascism and racism.

​The Northwestern Hammerskins have threatened to march on Capitol Hill in Seattle, and antifascist must turn out to defend the streets. The fascist march is planned as part of the annual Martyrs Day celebrations that the Northwestern Hammerskins are hosting in remembrance of Robert Jay Mathews of the white supremacist terror cell, the Order, who died during a shootout with law enforcement at Whidbey Island on December 8th 1984. In the past this event has been a smaller affair held on private property. This year the NWHS have boasted a larger planned attendance and have announced a more public appearance, which represents a dangerous escalation of tactics. We must not allow them to be further emboldened. Particularly in light of the recent upswell of fascist violence regionally and across the nation, we must vigorously oppose any effort by fascists to claim space and spread fear.

We will gather in the north end of Cal Anderson Park, Seattle at 5pm on Sunday December 6th. Please bring flags and banners so that it is clear that we are antifascists opposing the neo-Nazis. While covering your face is not mandatory it is a good precaution to take to prevent the police or neo-Nazis from taking your picture.

People are encouraged to use the Twitter hashtag #defendseattle to post updates and make it easier for everyone to keep track of what is happening at and around the rally. Rose City Antifa will be posting updates throughout the weekend of the 5th & 6th on any information related to NWHS Martyrs Day activities.

If your organization would like to sign on to this effort, if you have questions, or if you have information related to white supremacist organizing in our region, please e-mail us at [email protected] or leave us a voicemail on 971-533-7832.

Organizations that have signed on: