As the result of collaborative efforts between Pacific Northwest antifascist crews and ongoing infiltration of Patriot Front chapters, we can now identify Casey James Knuteson as a member of Patriot Front, a former Portland Proud Boy, and current resident of Gaston, Oregon. Over the past 4 to 5 months, Knuteson – along with his Oregon and Washington Patriot Front buddies – have posted a variety of white nationalist propaganda around Portland; they have also defaced Black Lives Matter murals and public art related to black history. Because of his continued connections with local Proud Boys, Knuteson has been networking on behalf of Patriot Front and establishing contact with local Proud Boy and far-right leaders such as Daniel Tooze. As one would expect from a member of an overtly fascist group such as Patriot Front, Knuteson is an avowed fascist and white supremacist, and should be considered a danger to his local community.

Patriot Front was founded by Thomas Ryan Rousseau as an offshoot of the neo-Nazi Vanguard America in August 2017. The group formed shortly after the “Unite the Right” rally in Charlottesville, Virginia where members of Vanguard America marched with James Fields, the man who drove into a crowd of people and murdered Heather Heyer. The group promotes a white supremacist, fascist “American Nationalism” that does not shy away from the antisemitic propaganda espoused by Vanguard America. Patriot Front is one of the largest distributors of racist and antisemitic propaganda in the country today, both online and via fliers, stickers, and banners.

Patriot Front has also held several short “flash mob” type events where their members will briefly march through a city – often at night when there are no bystanders – while wearing khaki pants, polo shirts, and carrying American flags. These shortlived marches are often choreographed and utilize smoke bombs or other props to gain a few minutes of flashy video footage. Bystanders in Philadelphia chased off Patriot Front members when they briefly marched over the weekend of July 4, 2021. The most recent of these occurred on December 4, 2021 in Washington D.C., in what is quickly becoming a pattern for the group, Patriot Front marched in full fascist “riot gear” up and down the Capitol Mall, but ended up leaving half their group to wait in the cold for over an hour for a ride after some of their U-Haul trucks encountered unspecified issues.

While Patriot Front is based in Texas, members have been active in the Pacific Northwest for the last few years. In January 2019, Patriot Front distributed threatening messages throughout a neighborhood in Olympia, Washington that read “Better Dead Than Red.” The group defaced a statue of York at Mt. Tabor Park in Portland in June 2021 as well as a community mural honoring George Floyd, Breonna Taylor, and Ahmaud Arbery the following month. There have been a number of lower profile instances of Patriot Front banner drops, stickers, and posters throughout 2021 in Portland and elsewhere in Oregon.

Knuteson, posting as “Leo OR” in the Patriot Front chats, uploaded four pictures of his “activism”. Patriot Front members are required to do a certain number of propaganda actions each month to stay members. All four of these “activisms” were done in the summer of 2021.

Based on information obtained from antifascist infiltration efforts spanning numerous months, Casey Knuteson appears to have joined Patriot Front in mid-2021 after having spent much of 2020 (and early 2021) as a Proud Boy operating with the Portland chapter. As per typical Patriot Front membership requirements, starting in July 2021 Knuteson began putting up Patriot Front propaganda stickers and stencils throughout the greater Portland metro area, including in his hometown of Gaston, OR. Over the past four months, Knuteson has also orchestrated regular banner drops featuring Patriot Front slogans over I-26 eastbound in Portland’s West Hills and other areas.

Knuteson is clearly wearing the same backpack in all three of these pictures. The first picture shows Knuteson during an October 2, 2021 banner drop and stickering run near the I-26 highway in Portland. The second picture is Knuteson attempting a banner drop in Portland on July 28th, 2021 where a bystander confronted them. The third picture is Knuteson at a Proud Boy rally in Mill Creek, Washington on November 22, 2020.

Throughout the logs for Patriot Front’s PNW chapter, Casey and his fellow Patriot Front members repeatedly celebrate bringing fear and intimidation to local marginalized individuals through their propaganda efforts. At the same time, Casey and his compatriots were repeatedly confused and stymied by numerous instances in which their banners or stickers were taken down mere minutes after having been posted. Despite experiencing this multiple times, there are no indications that they ever suspected that there were infiltrators in their ranks, nor do they seem to have reported any of this suspicious activity to higher-ups within Patriot Front.

Having established himself as a full member of Patriot Front, dedicated to regularly posting white nationalist propaganda in his local area, Knuteson began to also participate in other activities, including “sparring” sessions (we use the term “sparring” incredibly loosely here) and trips with other Patriot Front members to engage in activism elsewhere. In early December, Knuteson flew out to the East Coast with the other members of the PNW chapter to participate in their uniformed, masked march on Washington D.C. It remains unclear at this point exactly how long Casey was forced to wait for his U-Haul ride that evening, but based on his status within the organization, it likely was… a while.

CASEY’S HISTORY AND CONTINUED COLLABORATION WITH THE PROUD BOYS

Prior to joining Patriot Front in 2021, Casey Knuteson spent several months (if not more) in 2020 as a member of the Portland chapter of the Proud Boys. He attended their events in full Proud Boy gear, put up Proud Boy propaganda in Portland and other cities throughout the Willamette Valley, and participated in acts of harassment and intimidation against press and antifascists at Proud Boy events.

Knuteson attended the Proud Boy event in Portland on 9/26/2020 where he joined his fellow “Western Chauvinists” in drinking lots of beer and chasing members of the press out of the event while assaulting them. Knuteson also participated in the theft and defacement of a community art piece in Portland—the colloquially-dubbed “Nightmare Elk”—alongside other Proud Boys and members of Audra Price’s far-right organization Cops NW. Throughout the rest of fall and winter of 2020, Knuteson was seen at numerous “Stop the Steal” and anti-mask rallies held by Proud Boys throughout the Pacific Northwest.

A number of known Proud Boys and fascists attended the Stop the Steal rally in Salem, Oregon on November 7, 2020. Pictured here, among others in the crowd, are Dan Tooze, the head of Portland Proud Boys chapter; Andrew Duncomb, a right-wing troll, instigator, and Proud Boy affiliate; Timothy Ryerson, violent fascist and pedophile; and Casey Knuteson. 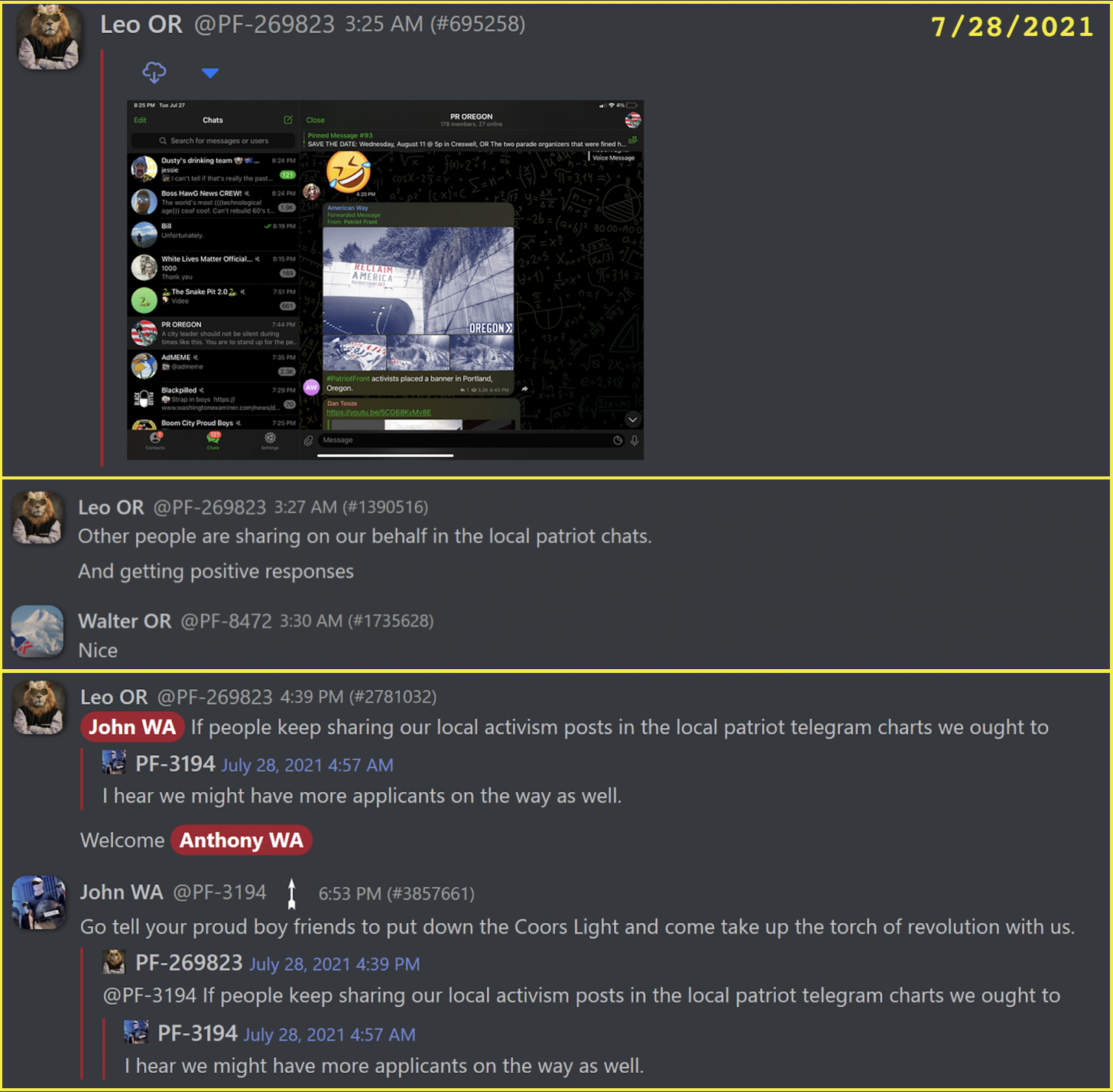 In Patriot Front chats, Knuteson states that Dan Tooze (head of Portland Proud Boys chapter) wants to meet members of Patriot Front. Tooze invites them to introduce themselves at an event for Ashley Babbitt on August 21, 2021. Knuteson also states that he shares Patriot Front videos in other right wing chats.

Knuteson frequently acted as a conduit as part of his efforts to network with other local far-right groups, funnelling Patriot Front propaganda material to Proud Boy and other far-right “patriot” Telegram channels, where it appears the material regularly recieved “positive responses”. In one Telegram screenshot shared by Knuteson, Oregon Proud Boy leader (and part-time Multnomah County Republican Party security provider) Daniel Tooze responds to a message from Knuteson about Patriot Front by asking Casey to “Tell [Patriot Front] to come to the Ashley Babbitt Event an [sic] Sandy on August 21 and introduce themselves to me.”

Knuteson tells other Patriot Front members in their chat that other people are sharing Patriot Front videos and propaganda in other “local patriot chats”. They discuss whether this will lead to more recruits, especially if Proud Boys “put down the Coors Light”.

As is the norm for a member of an openly fascist group like Patriot Front, Casey Knuteson is an unapologetic white nationalist, white supremacist, and antisemite whose communications are full of dog whistles and racial slurs. The following messages are some examples of Knuteson’s activity in a public Proud Boys Telegram chat channel during the fall of 2021. To give some sense of Knuteson’s racism: throughout the course of a single day in the aforementioned Proud Boy Telegram chat, Knuteson used the n-word 24 times.

Throughout November 2021 Knuteson repeatedly made racist and antisemitic posts in the Proud Boys Telegram chat that expressed a longing for a fascist, white ethnostate.

Knuteson repeatedly refers to the “Zionist Occupied Government” or “(ZOG)” in the Proud Boys Public Telegram chat. These posts show a virulent antisemitism that is common in Patriot Front.

In addition to being a racist and a fascist, Casey Knuteson is also a snitch. He is operating the Twitter account @TruthToldPDX which he has used to dox members of the Proud Boys in retribution for Jeff Mikey Johnson’s relationship with Aubrey Danner.

Using this account, Knuteson has threatened Johnson and other Proud Boys – posting information regarding their workplaces, addresses, and vehicles. While antifascists have been happy to collect this information, his fleeting loyalties may not inspire much confidence among his current Patriot Front “brothers.”

If you have further information on Casey James Knuteson, Patriot Front, or any other fascist organizing, please contact Rose City Antifa at [email protected]