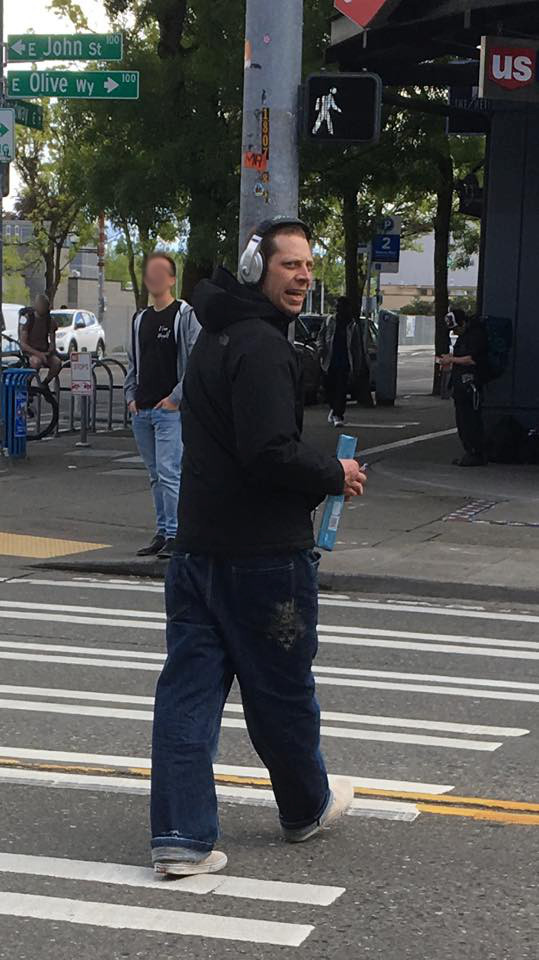 Yesterday afternoon, on Saturday May 13th, a member of the Greater Seattle General Defense Committee and their partner were walking on Capitol Hill when they came upon a man hitting and kicking an unhoused individual who was on the ground by the Rite Aid on the corner of John and Broadway. While everyone else on the streets seemed happy to ignore the situation, our member and their partner immediately stepped in and confronted the attacker, demanding that he step back from the victim. The attacker turned his attention to the GDC member and slapped them before then moving to confront their partner who had bravely placed themselves between the attacker and the victim. The attacker then verbalized a desire to hit our member’s partner and attempted to grab their phone at which point our member stepped closer and then got hit again by the attacker. Finally, other community members began getting involved and the attacker took off but not before they were able to snap this picture of him.

We are happy to report that both the victim and our member who were physically attacked are fine. The victim declined further offers for assistance at the scene of the attack and police eventually responded after being called by others who finally decided to intervene.

One important takeaway from this situation that both our member and their partner were quick to highlight was the complete unwillingness of the other community members to get involved in the situation until the people being attacked were not easily identifiable as unhoused. This represents a serious issue within our community, that people would be willing to stand passively by while an unhoused member of the community is attacked in broad daylight. They also observed that not a single community member even bothered to ask the original victim if they were alright once the attacker fled the scene. We at the GDC fully commend our member and their partner for taking swift and decisive direct action to resolve the situation and show solidarity to a community member in immediate need. Our only wish is that more community members would have immediately responded which could have ended the situation in a more expedient and safe manner.

Our organization’s stated purpose is one of community-oriented self-defense of the working class. Unfortunately, the prevailing economic systems that dictate so many aspects of our lives necessitate that large swaths of people remain unemployed in order to keep wages depressed for those who do have work and us pitted against each other rather than organized against the individuals and structures actually responsible for our plight. The Greater Seattle General Defense Committee hopes that others will draw inspiration from the actions of our member and their partner, as our membership has, and be more willing to step up and do the right thing when they see something like this happening. In these turbulent times it is more critical than ever that we act as a coherent community to make attacks on the working class, on the poor, on people of color, on the LGBT community, and every all-too-common intersection between all of these and other more-marginalized groups, so difficult for hateful individuals or organizations to conduct that they simply give up.

Solidarity to the unhoused!
Power to the working class!
Protect our communities!