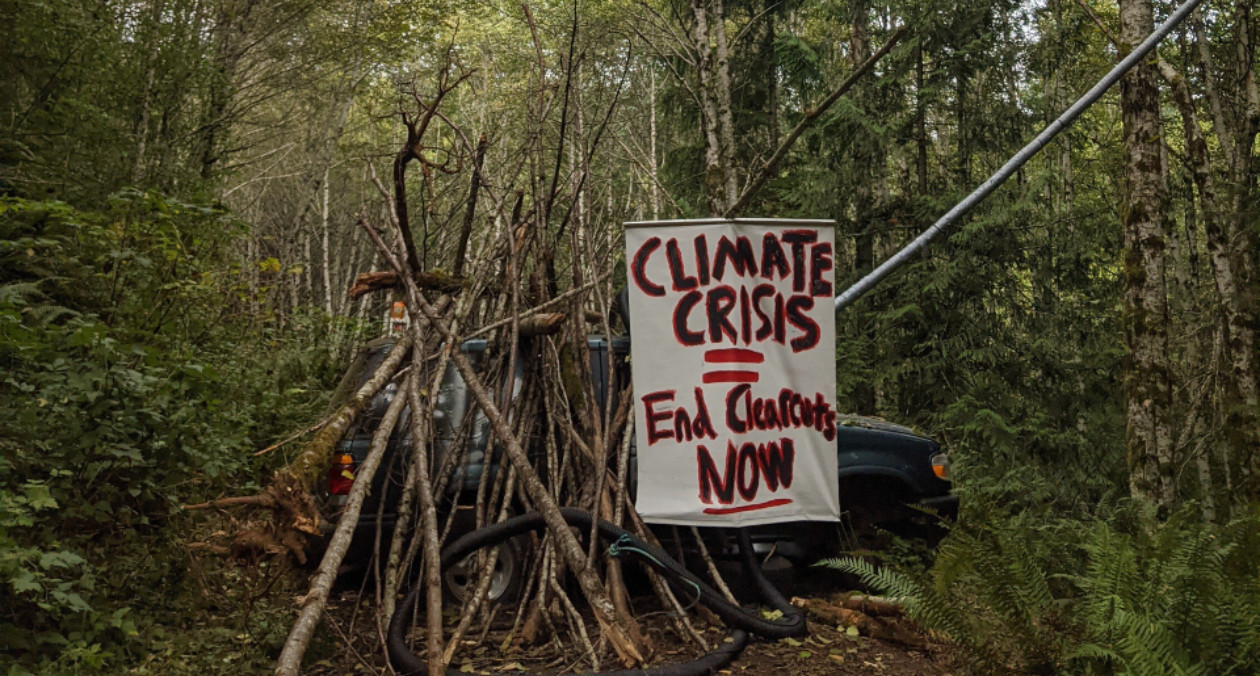 Early Wednesday afternoon just as the fog melted off, a convoy of trucks from at least four different law enforcement agencies parked on a logging road for an unannounced raid on a camp of forest protection activists, sweeping the camp away and leaving one man in the forest canopy tied to a unique contraption that continues to impede work on the controversial “Chameleon” timber sale. The officers came from the Thurston County Sheriff’s Office, the Washington State Patrol, the state Fish and Game Department, and the Department of Natural Resources (DNR) which planned and sold the timber sale and oversees all of the Capitol State Forest. They temporarily closed the roads to through traffic while they cleared the activists from the camp.

Ian Frederick, 29, a teacher from Olympia, was on the ground making coffee when the cops arrived. “There were just so many of them,” he said. “It seems like a lot of force to bring to deal with two unarmed civilians eating lunch.”

The two activists were briefly detained before being allowed to walk away while the officers attempted to negotiate with the remaining “tree-sitter” who continued to block the logging road. The DNR law enforcement eventually brought in spotlights and a generator and began to prepare for an extended siege of the tree-sit, which Mr. Frederick predicted would last a long time.

“I think these cops underestimate Tree’Angelo’s commitment and endurance,” he said. “He thought hard about this before doing it, and he’s prepared to stay for quite a while. He’s one of the most stubborn guys I’ve ever met, and I tried to tell the cops that but I don’t think it’s sunk in for them yet.”

Mr. Frederick was referring to his friend in the canopy, John “Tree’Angelo” Barksdale. Mr. Barksdale, 34, an outdoor educator from Tumwater, has watched with dismay over the past several years as the DNR has systematically clear-cut most of its remaining old-growth stands. An avid hiker, he’s seen many of his favorite local trails turned to moonscapes.

“Unit 1 of Chameleon is some of the most intact forest, the best habitat left across one hundred thousand acres,” Mr. Barksdale said. “If we want all this to actually be a forest and not just an oversized tree plantation, we need to save at least something. We can’t clear-cut all of it.”

Mr. Barksdale has used years of climbing experience to erect a unique “dunk-tank” platform atop an old-growth douglas-fir tree, tied to an abandoned Ford Explorer parked across the proposed logging road. If the car moves, his platform drops. It’s about one hundred feet down to the steep slopes of the forest below. Mr. Barksdale claims to have plenty of food and water and says he is prepared to wait out the DNR indefinitely.

“I’ve always wanted to tree-sit,” he says. “I love trees. I love camping. I can work remotely out here and attend Zoom meetings from right here on the platform. It’s super dreamy up here, and I’m trying to save these trees. I can’t think of anything else I’d rather be doing.”

The protest camp, which was started ten days ago by a few friends of Mr. Barksdale, quickly picked up support from local hunters, fishermen and ATV users concerned about the health of the forest. Protectors of the Salish Sea, an indigenous water advocacy group, held space with songs and prayers at the blockade on Saturday. Multiple community groups across Thurston County have come out in support of the blockade and are calling for the cancellation of the timber sale.

A rally is planned for today (Thursday Oct 8) at 3pm at the gate of the logging road leading into the timber sale, the road Mr. Barksdale is blocking. Community members are invited to witnedd the siege or Mr. Barksdale and see the ancient trees in the proposed clearcut.

Find photographs of the blockade here.

Learn more about the blockade here. Read about the role of mature forests in mitigating climate change here.