Day of Solidarity with Antifascist Prisoners 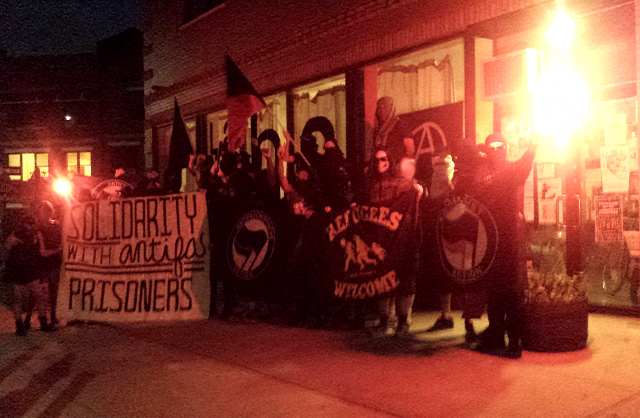 Call for the Third Annual International Day of Solidarity with Antifascist Prisoners, July 25, 2017

As the third annual July 25th International Day of Solidarity with Antifascist Prisoners approaches, we find ourselves fighting the hydra of fascism and far-right ideology. While its many heads have distinct looks in different parts of the world, this beast spews the same venomous poison of nationalism and bigotry everywhere. It demonizes refugees and immigrants, stokes hatred for Muslims, and attacks LGBTQ and other oppressed groups who are fighting for liberation and their very lives.

The July 25 International Day of Solidarity with Antifascist Prisoners originated in 2014 as the Day of Solidarity with Jock Palfreeman, an Australian man serving a 20-year sentence in Bulgaria for defending two Romani men being attacked by fascist football hooligans. Whether acting as individuals or as part of larger organized demonstrations, this is the kind of bravery and solidarity which defines antifascist actions against the forces of hate. Since the day of solidarity last year, we have seen this spirit all over the world—in Indonesia, Czech Republic, Brazil, Poland, England, Greece, the United States, France, Syria, Australia, Japan and all points in between.

While antifascism is global, unfortunately so is state repression. In the U.S., hundreds of antifa have been arrested resisting both the Trump regime as well as Far Right street forces. In Belarus, the state continues to harshly repress the antifascist resistance. While many of these comrades are awaiting sentences, there are still many who languish in prison. We will not forget these comrades behind the prison walls!

We call on anti-fascists worldwide to act in solidarity with antifascist prisoners. Consider having an event or dedicating an action to them. They are in there for us, and we are out here for them!

No Pasaran!
Until All Are Free!