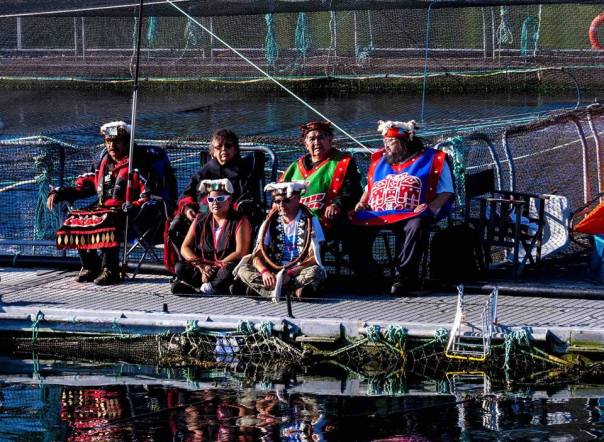 A group of First Nations has peacefully occupied a Marine Harvest salmon farm on Swanson Island, which is located 17 km east of Alert Bay.

On Aug. 25, Hereditary Chief Ernest Alexander Alfred, along with a group of First Nations, occupied the farm. He stated the fish farm is illegally parked in ‘Namgis and Maya’xala Awinakola territory.

“My family and I are committed to staying here until B.C. cancels the licenses of occupation in our territories,” said Alfred in an exclusive statement to the Gazette. “Canada (DFO) must stop this industry from putting infected or diseased Atlantic salmon in our waters. Marine Harvest must halt operations and take these fish out today,” added Alfred.

The Sea Shepard Conservation Society, which is an international activist organization, is also supporting the occupation as they have a vessel standing by the Swanson farm.

“We were surprised at this unscheduled visit and allowed them to observe our operations as long as they are respectful of our staff and don’t harm our fish,” said Ian Roberts, director of public affairs for Marine Harvest.

Roberts said, “we have contacted the elected chief as they requested the meeting, and as of now, we haven’t heard back from them.”

The occupation comes days after footage of unhealthy looking farmed salmon along the east coast of Vancouver Island was released.

The footage was gathered by Hereditary chief George Quocksister Jr. from the Laich-Kwil-Tach Nation and distributed by Alexandra Morton, an independent biologist, and marine activist.

“Any population, animal or human, there are some poor performers – it’s rare in our business and we are able to remove them before they go to the processing plant. The population of our fish are very healthy at the farm and are checked very regularly in their life cycle,” said Roberts.

He also stated farmed salmon are not a risk to wild salmon. “There is no evidence that suggests our fish are negatively affecting wild fish – in fact, by raising farmed salmon, you are taking pressure off wild stocks,” said Roberts.

Last April, Ernest Alfred and other Hereditary Chiefs invited all political candidates to the ‘Namgis Big House in Alert Bay to state their position on removing salmon farms to protect wild fish.

Both the Green Party and the NDP candidates previously stated they would work to remove salmon farms from the territories of First Nations who do not want salmon farms operating in their waters.

“The Musgamagw Dzawada’enuxw are also working closely with us. We are family, and we support one another. Every chief, far and wide, that I’ve spoken to, is supportive and they give us their blessings,” said Alfred.

The Musgamagw Dzawada’enuxw have opposed fish farms in their territory for nearly 30 years.

“We are not only doing this for our people and our future, but we stand strong on this farm at Swanson Island for the entire ecosystem that depends on our salmon,” said Alfred, continuing “It is our aboriginal right to be here. This is our home and we are not moving until we’re satisfied.”

Roberts, however, asserted Marine Harvest “has a license to operate our farm,” adding “we will meet with the elected chief to discuss their requests, but we will remind them that this farm is legally licensed to operate.”

Other articles from Warrior Publications about this struggle here and here.