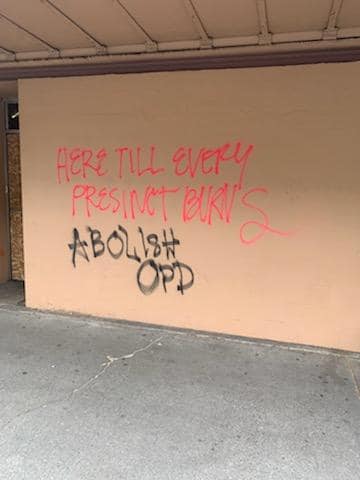 A call was put out for a demo here in Olympia in solidarity with Portland against the deployment of the federal agents. I showed up to the Heritage Park Fountain a little late but when I got there I was greeted by a crowd size I haven’t seen since the beginning of the uprising. There was probably around 150 people, 75-100 of them in bloc and geared up with helmets, shields, umbrellas, and a few gas masks.

We all hung out in the park till around sundown, there were people tabling literature and snacks and caffeine. A few people got together on a mic to talk about what was going on – they emphasized that the feds were deployed because for months people in Portland, and all over the country, have been intensely fighting for Black liberation and that’s what the current moment is about. Speakers also stressed that the feds were already here as ICE, CBP, and DHS and in combination with agencies like Washington State Patrol[1] were still actively kidnapping people all over the country. Speakers also stressed that it was not the feds that were killing people like John T. Williams or attempting to kill black teenagers Andre and Bryson but it was local police departments, the same ones that have been repressing and attacking people and making the death machine march on day after day.

Following the speakers there were prayers from indigenous activists, followed by some poetry, and then as the sun began to set the march took off with chants of “fuck the feds, we don’t need them, all we want is total freedom!”

We took a steady pace up 5th and anxiously approached Hannah’s, a bar that tends to attract more Chud types, people were coming out to see what all the commotion was about and I was worried there was going to be a fight but in an interesting turn of events some of them got in on chanting “fuck the feds!”. It makes sense as white Americans can more readily identify with an idea of federal overstep that they could see as a threat to themselves than with the concept of black life or black liberation – who that “federal overstep” has always historically been directed at I might add.

Ether way, it was nice to not get into a fight, and we continued onward and turned up Capitol. A few people peeked their heads out of the windows of their apartments above us and yelled out various versions of “fuck the feds!”, it was kind of surreal. Further up the street the Key Bank and the empty corpse of what used to be a Chase Bank got tagged up and further up the street the Washington State Patrol HQ got 10 of its windows smashed up. 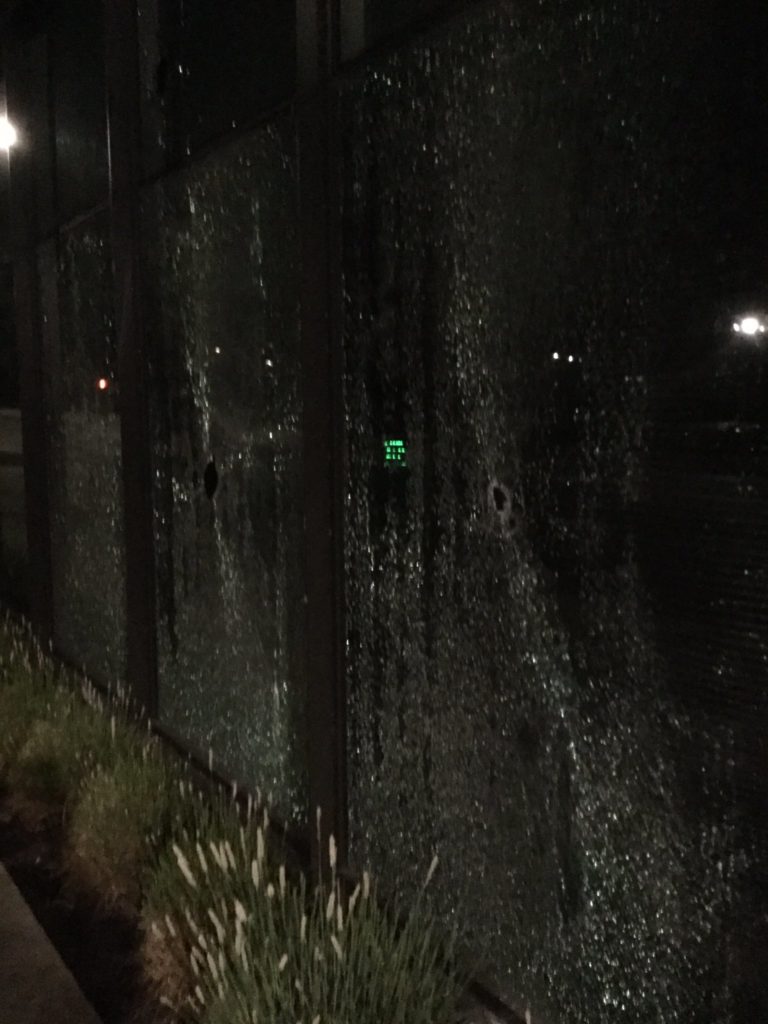 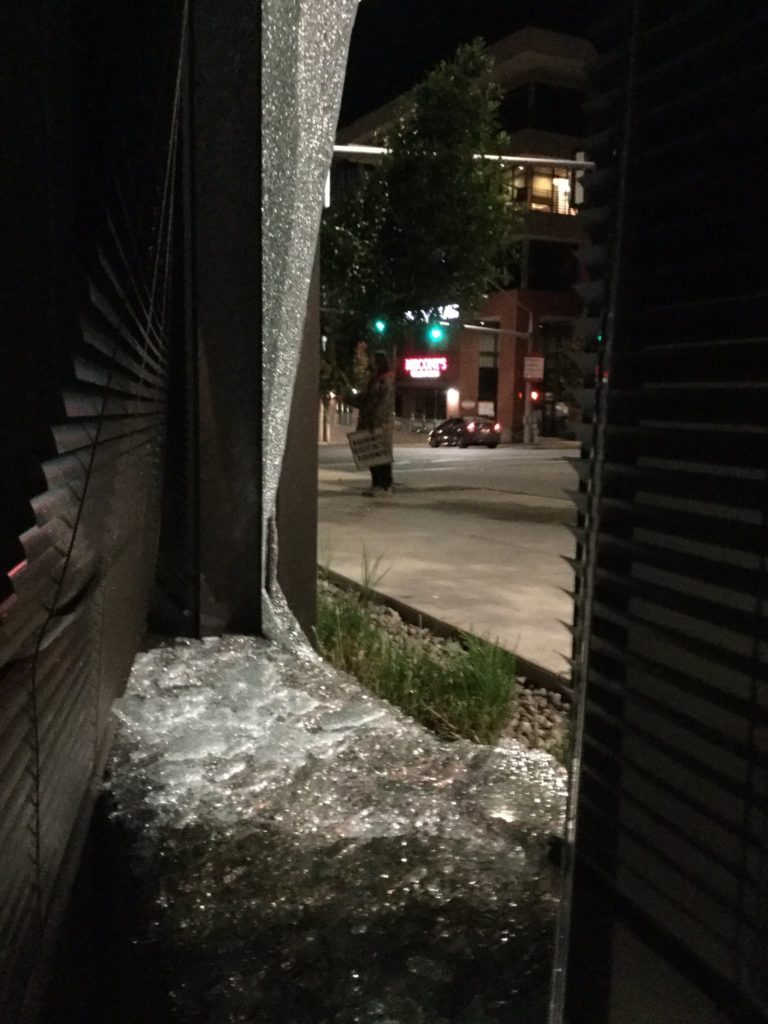 Nearly immediately OPD and Thurston County Sheriffs came up and started using riot munitions – pepper balls, rubber bullets, and blast balls. An absolutely wild amount of blast balls I don’t think I’ve ever seen deployed here, but at this point I was incredibly proud of my community. I remember last month at the Black Liberation March Against Displacement, Thurston County Sheriffs charged in with one round of flash bangs and completely dispersed the crowd, but tonight they let off rounds after rounds after rounds and people kept together at a steady pace and overall seemed unfazed and I think a large part of it was because of the defensive equipment people brought, the shields and umbrellas to the back really helped.

In response to the barrage of munitions, people began to throw rocks back but kept going up Capitol past the actual capitol and towards the wealthy capitol neighborhood where everyone’s favorite punching bag Mayor Cheryl Selby lives, but right on the edge of the neighborhood people took a left towards more government buildings. At this point, I’m not sure which pigs shot it off, but white smoke was thrown into the crowd. People sped up a little bit thinking it was tear gas but I took a big inhale of it and was fine. My theory is on the scanner they said they wanted to keep us out of the rich neighborhood so I think they tried to psych us out with fake tear gas. We were on the very edge of the neighborhood at this point and their use of crowd control weapons pretty much stopped at that point because god forbid they disturb the rich people.

We hit Jefferson and started heading back towards downtown, graffiti was going up, a few windows on some offices and realtor buildings were getting it, and the police were still getting rocks. As we just passed by the post office a line of OPD riot cops came out of the side street and unloaded crowd control weapons, throwing blast balls and tear gas grenades directly at people. I would also like to note at this point we were in a residential area and they were filling the whole area with tear gas[2] but I guess since it’s not a wealthy neighborhood where the mayor lives and the governors mansion is, it just doesn’t matter. At this point people turned down the opposite street and made another turn up towards city hall.

At this point so much happened so fast because police were coming out of every street and heavily tear gassing and hitting us with blast balls, we were essentially pushed around in a circle and up a hill away from downtown back towards the residential area. It was at this point after getting enveloped in a heavy cloud of gas that me and my crew broke off.

I think the pushing us in a circle was intentional because on the scanner they were saying they didn’t want us to get downtown or by city hall but that the crowd was too big and too hostile for them to handle and they were intentionally trying to break us down and split us off to a size they could manage. But it was only the flooding of streets and neighborhoods with tear gas that got us, so obviously we need to invest in gas masks for people, ESPECIALLY PEOPLE WITH ASTHMA, a few people had really bad asthma attacks, one person who was just in their house that the gas leaked into.

Another thing I noticed was when they were pushing us around there were times when a street was blocked off by a single cop car and it would have been in our best interest to just charge them – we’re strongest when we understand our collective power and when we outnumber and out power them.

Overall it was solid, the crowd kept a steady pace and people didn’t get left behind as much as with other marches. Still room to improve obviously but we were definitely safer when we were together as a big bloc. The use of defensive equipment was absolutely great, the shields, umbrellas, and banners did great to block police visibility and mitigate the effects of their weapons. This should become standard! There were a handful of lasers but not enough to be useful, but that can change. Something we may want to think about is ways to use paint to obstruct their vision – if their car windshields are obscured they can’t drive, if their gas masks are blinded they can’t gas us and our neighbors. Also, according to OPD’s PR person over 200 rocks were thrown at officers! We have no idea how they track that but it sounds incredibly cool!