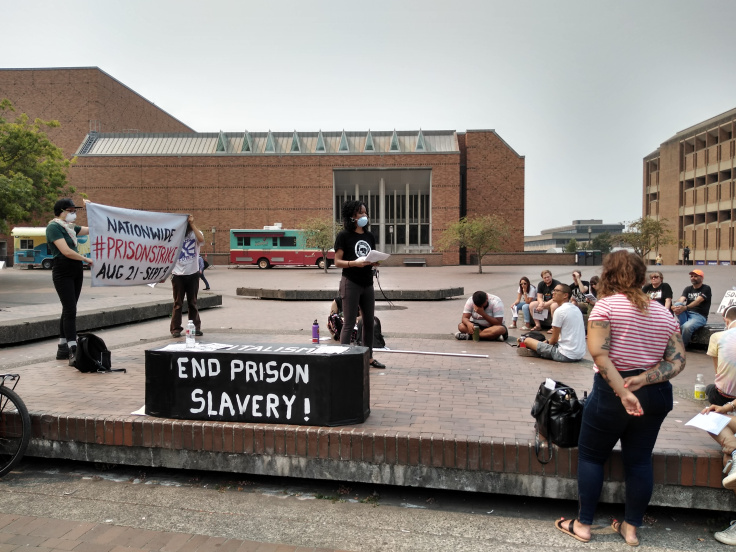 This summer we witnessed a prisoner-led struggle for justice on a scale never seen before. Catalyzed by a massacre at Lee Correctional Institution in South Carolina that took the lives of at least seven prisoners, prisoners in seventeen different states went on strike. Participating in work stoppages, hunger strikes, and boycotts, they made a wide range of demands including the abolition of prison slavery, more access to rehabilitation programs, and an end to racist over-sentencing and gang enhancement laws. With the boldness of their tactics, they scared prison officials into offering concessions and attempting to contain the resistance through severe, ongoing repression.

We in Washington State responded to prisoner-led Jailhouse Lawyers Speak, who made the call for the strike, with organizers banding together in our region to work to ensure that the strike would have all the “free world” support it could get. Holding noise demonstrations, actions targeting prison-profiteers McDonald’s and Starbucks, infoshares, an open mic and a letter-writing event to support strikers facing repression, our goal was to use all the resources available to us to cut a clean path for those striking from behind bars to realize their demands.

While the strike, which lasted from August 21st to September 9th, was a huge accomplishment, the demands remain unmet and violence prevails as the order of the day in our prison system. For that reason, and to move in the direction of prison abolition to which the prisoners’ demands point, we in Seattle are starting a regional chapter of the Incarcerated Workers Organizing Committee (IWOC) of the Industrial Workers of the World (IWW). As abolitionists, we recognize the prison industrial complex as a tool for destroying relationships, and in response we prioritize building relationships: with organizers inside and out and with communities using their resources to mobilize in support of prisoner-led action.

One specific relationship in this context that needs to be healed is the relationship between the labor of those living outside prison walls and those within them. Too often labor organizing neglects the overwhelming injustices faced by prisoners, who work in incredibly coercive and violent conditions. We need to be prepared to receive the leadership of some of our nation’s most vulnerable and exploited workers if our hope is truly to transform the damage that capitalism brings us. It is necessary that we recognize it is only with the death of prisons that white supremacy, heteropatriarchy, ableism, and settler colonialism can be eliminated.

Already we are hearing from prisoners within our state lines who are planning a strike and we are gearing up to support them. We do so by organizing ourselves in collaboration across walls because we recognize that there is no institution in place to adequately address these harms. We reject any claims to authority or justice made by state institutions that refuse to recognize their connections with genocide and slavery. As it stands, the American flag flies as a symbol of torture. We are raising our own flag to fly over it.