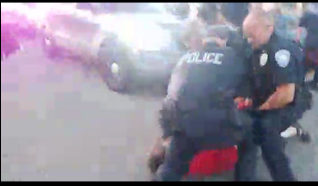 Tonight, ten of us were arrested during a festive noise demonstration in solidarity with undocumented migrants and for the abolition of ICE and the Northwest Detention Center. We wanted to let those incarcerated inside the NWDC to know that they have support on the outside, that we want them released immediately. Our numbers were small, numbering around 40. A single police car appeared and started harassing one of us, the officer called for backup and suddenly twelve police cars rolled up. The police immediately started snatching people, with no warning or dispersal order. In the confusion, ten of us were arrested for alleged riotous behavior. Our friends are in jail and we are raising money for bail, follow the link at the bottom. In the face of repression, we must bounce back with more force, more numbers. If you are able and willing, please join us outside the NWDC. We need people here day and night, and especially for the noise demos every day at 9am and 9pm. Repression wont stop us, we aren’t going anywhere. Solidarity to all those detained inside. Abolish ICE, release our friends and family, and open the borders.

– From the Occupy ICE NWDC Camp

Complete bullshit with the cops tonight. I think Twitter stopped working halfway through the live video I posted. It was a straight up attack though, they pulled up & intimidated for a moment, then jumped out of their cars & started throwing people to the ground. 6-7 arrested.