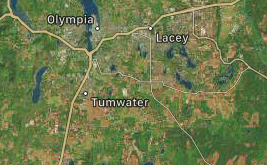 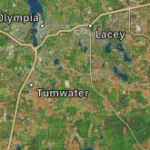 What better way to ring in the new year than running around on enemy turf and riling up captives? There was a NYE noise demo called for 8pm at the Thurston County Jail in Tumwater. A crew of around 20ish people assembled and went around back the work release building up on a hill that overlooks the smoking yards and windows into the buildings, as we rounded the corners people began shouting and banging on noise makers. There were a few people chilling in the yard who were both confused and excited to see people, but the guards came out quickly to be NYE killjoys of thee highest order and close down the smoking yard.

Even with the yard closed down, people piled up to the windows to wave at us and we waved back. A few people lit off smoke bombs, some climbed up on the fences of the smoking yard to get a little closer to thee captives, and after about 15-20 minutes we all made the decision to dip before the pigs seriously responded. As we left only 2 TPD cars responded but they kept their distance. People safely got away, though some were followed for a minute.

Overall, a success on enemy turf. We unfortunately can only do a noise demo at the work release building because its the only section with a yard or windows to the outside, the main of Thurston County Jail only has small windows way high up that are all inward facing and “yards” the size of a bathroom that’s solidly walled off all around. The only way prisoners would know we were there is if we had big fireworks to launch over the jail or we were breaking them out. However, across the street is the youth jail which does have windows all around and it’s a shame we didn’t go to show some love to the kids – as far as I can remember we haven’t gone to the youth jail since the 2016 prison strike, as we left there we chanted ‘we’ll be back’ but we never went back and that needs to change.

As the criminal system slowly expands in Thurston County in response to a new wave of capital accumulation that expresses itself in gentrification and increasingly violent struggles around the existence of our houseless neighbors and friends, we hope more focus will be put on this little corner of Thurston County as there is an announced $19 million jail expansion in the works as well as a new Thurston County Courthouse complex to process more people more quickly.

Let 2020 be the decade we take the offensive against the ever expanding tentacles of the carceral monster.

There were rumors going around in the form of wheatpaste around town of a party at the well – a site that represents the more intense manifestations of resistance to gentrification and violent reaction by the city and local businesses against houseless people to push their pacified and white washed (literally with the increase of violence against people of color these past few years – specifically black people) vision of Olympia. The call was for midnight on NYE, but by 11 homies with eyes on the well were saying that 4 pigs were already posted around the well. The general vibe was nothing is probably going to happen.

Midnight came and went and nothing happened. A small crew of maybe 10 of us shrugged and decided to walk around town, maybe something would happen somewhere else? But as we got down the street, our good sense was overridden by the mischievous spirit of NYE and we donned our masks and this small crew moved through the crowded bar area of 4th ave chanting “NO 2020 – FUCK THE POLICE”. The response from people around us was a lot of confusion but a lot of people yelling back “FUCK THE POLICE”. We rounded a corner and emptied thee contents of a trashcan into the street and tossed a flare onto the rest of the trash in the can.

In an appropriate metaphor for the state of Olympia – a white yuppie who had their fun night disrupted by the bare minimum of disorder desperately tried to put the trash overfilling the street back into the garbage can (with the flare still going lol) but here’s the secret of Olympia, the trash aint going nowhere and its gonna overtake the city. Run while you still can.

We continued up the street and ran into a small group of NYE revelers who shared some sparklers with us and jumped around and danced in the street with us for a few minutes until the police showed up, at which point we dipped without incident.

It was nothing spectacular, but sometimes the small wins are what’s needed. Maybe this is just me, but I think people have been feeling lately that it’s impossible to do anything with the police around, yet with no plan and just pure impulse and improvisation we were able to have a little fun under the nose of the police while they were prepared for something. I think anarchists often forget our greatest strength is our ability to improvise and out-maneuver the police. Sometimes trying to plan out for every detail will leave us paralyzed rather than empowered.

I also think that publicly promoting potentially conflictual events has fallen out of favor and to our detriment, so this felt like a breath of fresh air for sure. There’s a million things to worry about for sure – from pigs to reactionaries – but ultimately we need to be constantly recognizing our force in a million different ways and opening it up for others to join us. My worry with keeping conflictual action on the DL is that it loses its ability (however slim it may or may not be) to spread socially and we end up an unintentional vanguard carrying our spectacular actions that people see as only something those people do. Every move comes with risks and sometimes we gotta take those risks if we want to win.