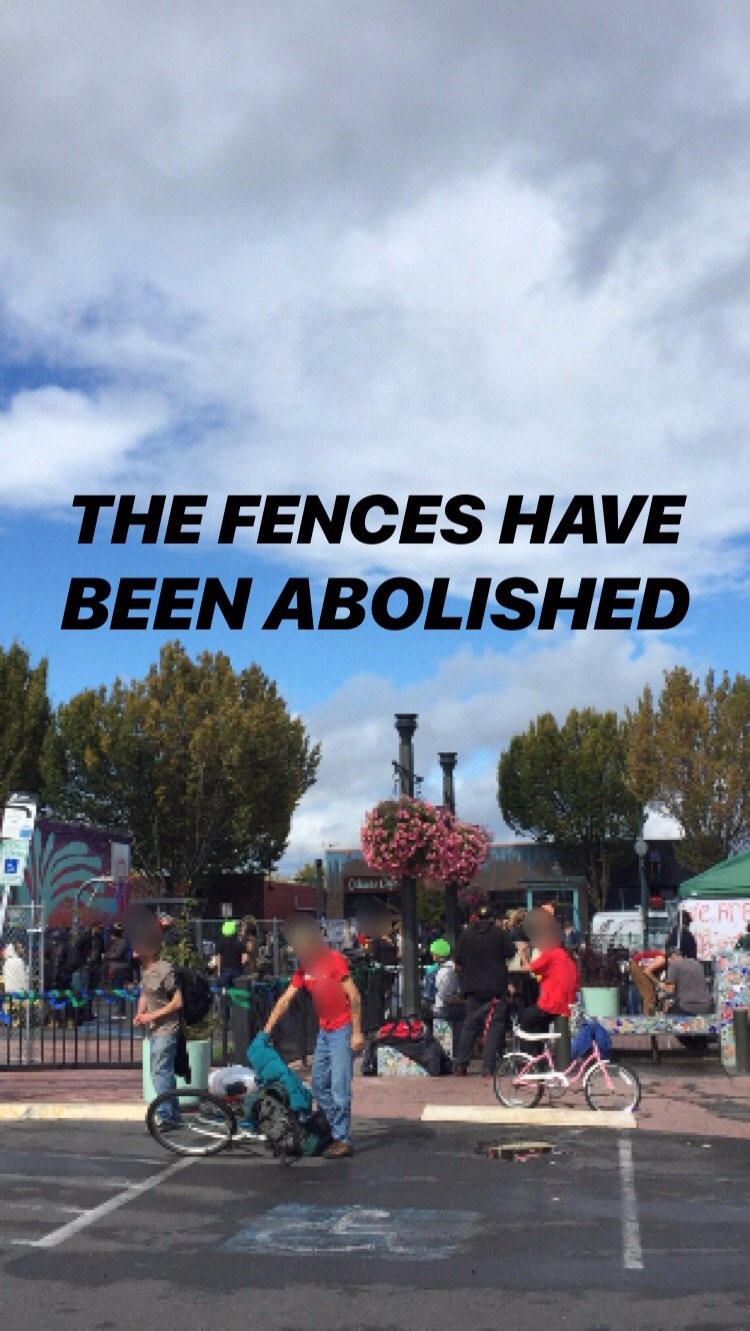 At 1pm on Saturday some unknown anonymous heroes tore down the fences surrounding Olympia’s Artesian Commons, a concrete lot with basketball hoops and benches adjacent to the artesian well and one of the few downtown locations where one can spend time without having to pay money. The Olympia Parks Department abruptly closed the Commons last month, citing supposed “safety concerns” and leaving many in the houseless community with nowhere to go during the day. This was in conjunction with an aggressive push to evict homeless encampments and begin enforcing the city’s “no sit no lie” ordinance. Word quickly got around town that the Commons were open again and people flooded in and started playing basketball and Frisbee. Food Not Bombs served hot meals out of a pop-up tent. Others took chalk and wrote messages of resistance demanding that the well be reopened. Some people wore masks but there was no black bloc, just a diverse group of anarchists, passers-by, and street-dependent folks hanging out and having fun. The atmosphere was extremely festive and wholesome. The sun even came out for a bit and we got to remember how Olympia can be so beautiful. We didn’t see even so much as one cop roll by for hours.

Just before 3pm the parks department came and unlocked the southern gate which people had previously been climbing over to get in and out (before the Commons were closed for good last month they were closed nightly at sundown and the waist-high gates at both ends were locked – to permanently close the Commons an additional tall chain-link fence was erected). The crowd initially cheered as the gate was opened, then apprehension set in – did they just open the gate to prepare for a police action. 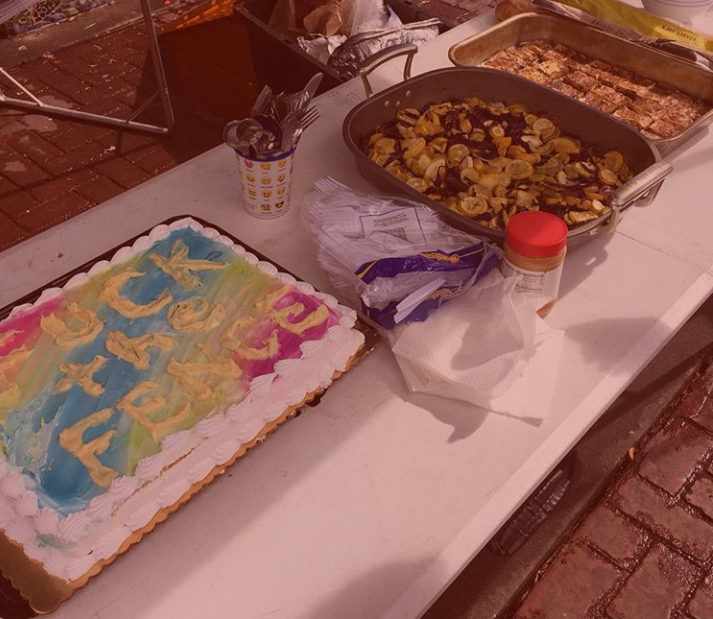 A few minutes later 8 police cruisers and one police van pulled up to the well on 4th Avenue, sirens blaring. Some people left, not wanting to risk arrest, but most people stayed. 15 officers in riot gear with batons formed a line just inside the entrance, while other officers behind them held pepper ball guns, smoke grenades, and flash-bang launchers.  They gave several warnings insisting that people leave the park from the southern gate. Some people were unwilling to let the intimidation stop them from celebrating and continued to play basketball directly in front of the police line. A crowd watched chanting “cops hate fun, cops hate fun!”

Affirming the accusation that cops hate fun, the police, unprovoked, tackled one of the basketball players to the ground and began advancing and shooting pepper balls at the crowd. They arrested another person an, older man this time for no discernible reason other than his presence in the well.

Everyone but the cops left the park toward  5th Avenue. Many people circled around the block to stand in the middle of 4th Avenue, blocking the squad cars and the van holding the arrestees, and jeering at the police and parks department employees replacing the chain link fences. At this point the police were occupying the fenced-in commons and the rest of us were in the street making fun of them, jumping rope, and playing volleyball.

The Daily Zero (The Olympian) has footage of the flash bangs here.

Once the fences were back up the police attempted to clear the street as belligerent young antagonists took “fuck-you” selfies in front of the squad cars. With billy clubs and flash bangs they pushed us back to the intersection of 4th Avenue and Jefferson Street. We reconvened in the middle of the intersection, the same location as the initial stand-off with the police on May Day 2017. The police deployed more flash bangs to clear a way for their vehicles and many people scattered, wary of the potentially lethal force (link to Portland). Some were hit in the face with the flying shrapnel but would not be deterred.  The van tires squealed and the van rushed through the momentary hole in the crowd headed towards the city jail. The police advanced into the intersection throwing more flashbangs then drove away.

As soon as the police were gone the crowd reformed on the sidewalk outside of the well and started shaking the fence. Then a few brave souls tore the fence down once again and people again started reoccupying the park. This time the police were back with clubs again in 5 minutes and everyone hopped the gates to avoid arrest. The cops guarded the parks department officials as they re-erected and reinforced the fence with iron chains. A crowd stood by and heckled them naming them as the class traitors they are for closing down one of the city’s only public gathering places that you don’t have to pay for.

Another part of the fence near the corner of 4th Avenue and Adams was moved into the street. The police fired pepper balls then threw a larger flash bang directly at people standing on the sidewalk, half a block away from where the fence was being dragged into the street. Among other injuries this  appeared to trigger one person to have a seizure. This bang had some sort of gas or smoke inside and people started coughing and retreated away from the park but continued to hold 4th Ave.

The crowd held the street for a time until again the police demanded the street be cleared and started advancing towards us.  They again pushed east to the intersection with flashbangs 2 of which landed on the sidewalk hitting at least one person in the face.

The police held a line in the street keeping people on the sidewalk. Protesters, anarchists, street folks and passersby yelled at the cops for the bullshit they had pulled and it seemed to start to get under the cop’s skin. One person who walked by and was talking shit was snatched, again unprovoked, and arrested and also taken to city jail. The crowd on the sidewalk slowly dispersed while some people handed out pizza.

At 9 pm that evening there was a noise demo held at the local jail. One comrade who was held in city jail has since been bailed out, she said she could hear the demonstration inside and appreciated our solidarity. As of the writing of this, our two comrades held on felony charges remain in jail awaiting arraignment. 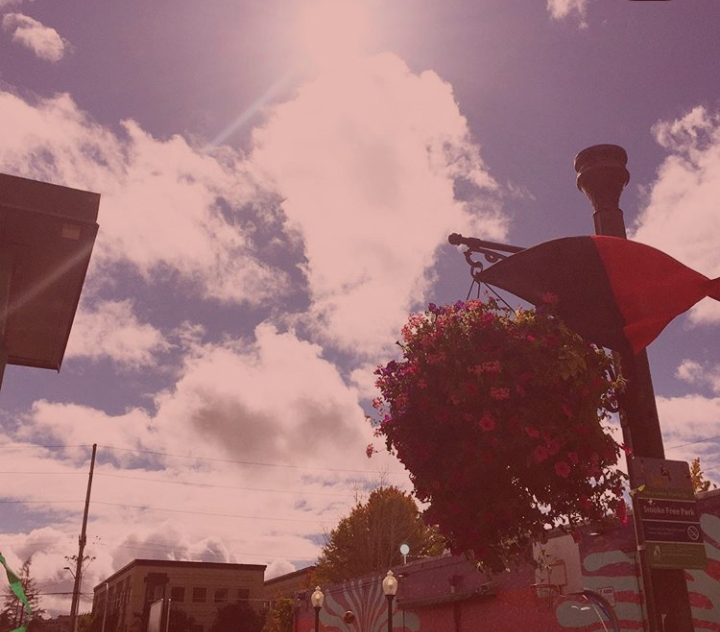 This action felt in many ways like success, thanks to direct action, not polite lobbying, the well was autonomously reopened. A combination of repression, cooptation and summer distractions have made actions in Olympia somewhat lethargic lately. Resistance to the well closure and houseless sweeps was sometimes coopted by nonprofit leaders who claimed to know the “right way” to make change. The image of the police evicting people from the well was a stark reminder of what enemies the city government and the police are. This was the most combative street demonstration we’ve seen since May Day and was participated in by a much wider cross section of Olympia.  It is our hope that this type of direct action that combined joy, confrontation, spontaneity and mutual aid can be a sign of things to come.

Here are two fliers that were distributed after the closing of the well.