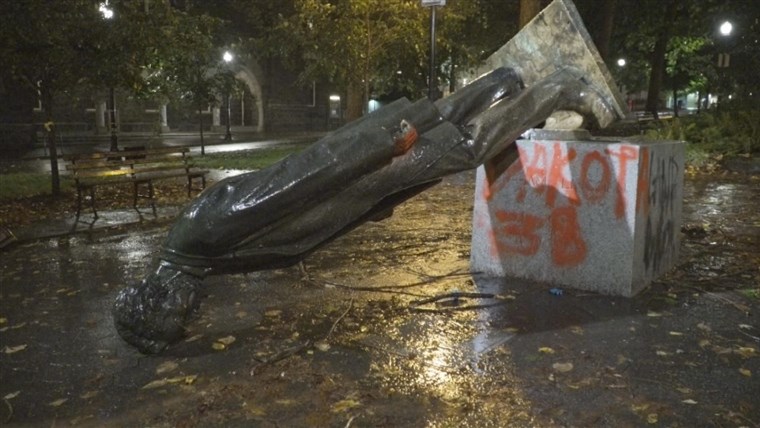 About a week prior to the action, a radical indigenous affinity group in Chinook land known as Portland called Generational Resistance put out a poster giving the location for the Indigenous People’s Day of Rage. Then, a few days later, they put out a poster calling for a black bloc, no peace policing, and most notably: no cameras. This was a shock to the fledgling Portland protest twitter community, since the 100+ days of protest has drawn in legions of clout chaser “press” trying to get their very own juicy clip featured on CNN, disregarding any safety for the protesters, only to claim that they were helping by occasionally filming a cop.

The protest formed to about 300 strong, an impressive number considering the ever dwindling attendance of the nightly “direct actions” (I use this term very liberally since 99% of the time they are just pointless rallies that lead to arrests  and trauma). After a brief rally and prayer, we marched to the statue of violent colonizer Teddy Roosevelt. Calls for solidarity were made, and heard, and protesters surrounded the statue and allowed for activists to take their time in dethroning the colossus. When Roosevelt finally fell, a raucous cheer cascaded the group.

Riding this high energy, the crowd then moved to topple the nearby statue of racist colonizer Abraham Lincoln. Being a much smaller statue facing a crowd experienced in iconoclasm meant that the whole ordeal was done in about 2-3 minutes.

The crowd then marched towards the Oregon Historical Society museum, and paint balloons were handed out to deface the mural glorifying Lewis and Clark. As another show of rage at the museum for holding stolen artifacts, the museums windows were smashed.

The crowd then moved their sights on the Portland State University campus police station. This is the home base for the PSU campus police station, a campus police force that has killed two men, Jason Washington and Richard Barry, while ironically calling themselves “security forces”. For years activists and friends of Washington had tried to get the college to abolish its police force. I’m confident that there was a widespread feeling of justice and satisfaction when the police building’s windows were smashed out.

A US military themed and police supporting restaurant also had its windows smashed.
Any liberals/peace police had long gone home by then. Since the police were preoccupied with a shooting, there was still no presence of them. The crowd then took the opportunity they saw and began marching through downtown, smashing up the banks and corporate storefronts which had recently removed the boards from the windows after thinking the riots in May had long settled. Eventually, after the window smashing failed to cease, the police sent their riot cops after the march. The crowd, feeling accomplished, saw no reason to continue the march and dispersed almost immediately instead of trying to foolishly stay in an attempt to fight off the militarized overfunded police forces.

While the national media will have you believe that Portland is constantly up in flames, this action was actually the biggest and most effective in months. Usually rowdy protests like these rack up huge arrest numbers, such as the 65 on the first nights, the 59 on night 100, and the 26 and 28 on nights where the protests were completely peaceful and the cops wanted to mass arrest. But this night’s arrests? 3. Just 3.

The soaring success of this action can be attributed to a couple of things:

No Cameras
while there definitely was some moaning to be heard, most of the press that lasted this long have some sort of sympathy to the movement. When a bipoc group told them to put their cameras away most obliged. The no camera and no live streamer rule significantly prevented cops from being able to monitor the action (bike bloc wouldn’t allow cops to get anywhere near the protest), and it pissed off local far right propagandist Andy Ngo, who often posts videos, especially incriminating ones, on his twitter feed to push his agenda and endanger protesters.

I didn’t see shit
The event was promoted as a day of rage for bipoc, and subsequently peace policing was discouraged and black bloc encouraged. This was a subtle yet completely safe way of signalling to other radical folks that this was the action for them. Whenever crimes were (allegedly) committed, the chant “what did you see? didn’t see shit” echoed through the crowd. This, combined with lack of press, created a safe environment for people to enact their rage.

Rest
For some ridiculous reason, there has been a notion that protests must occur every single night. Maybe at the beginning of the uprising when rioting was common and numbers were easily replenishable this could make for an effective tactic, but when the numbers are shrinking and the only thing that happens are arrests, consecutive demonstrations just create fatigue, and divide up the militants from forming a critical mass. There had not been a public action in days, which allowed for protesters to rest, and for all the militants to show up on the same day. The new infrequency of actions definitely allow for a bigger punch to be packed.

Being like water
Usually, when police disperse a portland protest, it is a very violent affair. Protesters will try to hold their ground and withstand bullrushes. Fighting a much larger force head on is a really bad idea, and has often resulted in a lot of losses for the protester side (and little to no effect on the police either). For whatever reason the crowd knew that scattering was the move that night, and, like water, dispersed when coming into confrontation with the adversary. Like I said before, an unprecedentedly low number of protesters were arrested.

Creating confusion and some luck
When the march started, Generational Resistance tweeted “we may or may not be headed to ICE”. The ICE facility is far south of downtown, and protests there are always met with a huge police response and a mobilization of the DHS forces. After tweeting that, the protest then proceeded to never even go near the ICE facility. This strategic misinformation created a whole lot of confusion for the police response team. In addition, shots were fired in another part of downtown, forcing the police to divert some of their already stretched thin resources to respond and apprehend the shooter, who gave them hell while he attempted to get away. This was some pure luck for the protests which gave it a very convenient window of opportunity which hasn’t been seen since the very beginnings of the uprising.  I see an opportunity for activists to take advantage of the limited police resources during protests and execute their own direct actions during that time, giving both them and the protests more room to evade the police.
All in all, this highly successful action prompted national news and the president’s attention, and was a welcome return to the militancy from the beginning of the uprising that was surely missed, and a badly needed lift of spirits for the stagnating protests. Here’s to a future free of capitalism, colonialism, borders, and the state!