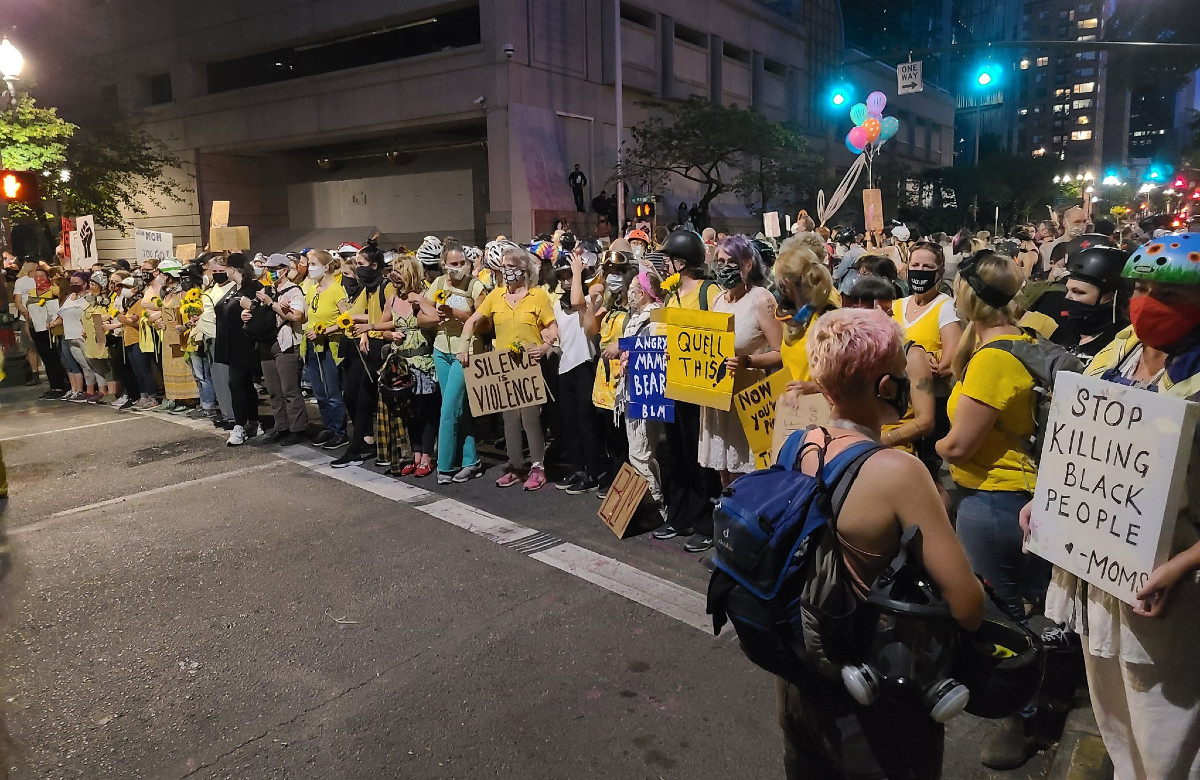 Last night saw one of the largest, most rowdy, and well prepared crowds at the justice center in PDX in over a month. Protesters came out with helmets, shields, goggles, gas masks, medical supplies, laser pointers, spotlights, and as seen in this video, the knowledge, materials, and confidence to deal with tear gas. Some canisters were returned to sender, while others were simply extinguished by pouring water on them. As we all know now, they are heat activated and just require getting squirted with a half a squirt bottle or dropped into an open jug of water.

The mom-bloc (also being referred to as ‘mom-tifa’) was also out in force tonight and on the frontlines, facing off with the pigs and protecting the crowd with their bodies and determination. The rumor is that the mother of Donovan Labella, the protester who the feds put in critical condition with a fractured skull after shooting him in the head with a impact munition from a shotgun last week, called for moms to come out and essentially fight for a better world for their children and do everything they can to keep them safe. And the moms have answered that call. Saturday was the first appearance of the moms as a force, and last night their numbers had by multiplied several times. “When the moms come out to fight, the empire has already fallen.”

The night saw extended clashes and an escalated level of violence from the feds, who were clearly unhappy with the huge crowd who was there to expel them. Several rounds of tear gas didn’t deter the crowd, who regrouped over and over and marched back to the justice center and federal courthouse repeatedly.

Momentum is building in Portland as tactics escalate. As many liberals (and everyone to the right of liberals) would have you believe, the burning of the Portland Police union building last night did not alienate people from participating. In fact it did the opposite, as more and more people have become inspired with the ferocity that people are showing as they fight against this despicable system that was founded on the back of genocide against the continent’s original inhabitants and the labor and death of Black bodies stolen from across the ocean.