Submitted Anonymously
A brief summary of some recent actions in Coast Salish Territories on Southern Vancouver Island, in solidarity with Wet’suwet’en land defenders under attack in northern BC by the RCMP and Coastal Gaslink pipeline:

January 8, Victoria — Hundreds of people blocked Belleville Street in front of the BC Legislature before marching to Finance Minister/Local MLA Carole James’ constituency office on Fort Street. Victoria Police barricaded the entrance to prevent marchers from entering the office. According to a report, at least one person entered the office prior to the march and locked himself to office equipment, causing the office to be shut down completely for at least a few hours.

January 16, Langford — A wildcat street march shut down traffic and various major intersections as it wended its way from the Millstream shopping area to NDP Premier John Horgan’s office, with a convenient stop at the Westshore RCMP detachment on Atkins Avenue. The RCMP admitted to several local media outlets that their operations were disrupted by the march, which blocked an entrance to the detachment with the aid of three electric vehicles.

January 21, Sooke — According to local media, a solidarity rally was scheduled for the Sooke Town Centre Kiosk, 6660 Sooke Road on Monday, Jan. 21 between 4pm and 5pm.

January 30, Victoria — A $250 per plate BC NDP fundraiser dinner was disrupted at Heron Rock Bistro on Simcoe Street. Finance Minister/Local MLA Carole James and her assistant attempted to flee the restaurant, at the first sight of a group of Indigenous and non-Indigenous protesters. James and her assistant were chased down the street, and confronted for their hypocrisy and complicity in the colonial fracking pipeline project. While many of the moneybags and big-wigs had to abandon their own fundraiser due to the disruption, leaflets were distributed throughout the restaurant to those who remained. Banners and signs included slogans such as “NDP: Frack Off!”. Handfuls of leaflets were tossed in the air within the restaurant and through its entrance, and anti-pipeline, anti-NDP anarchist graffiti was visible directly outside the venue.

February 4, Victoria — In response to a call from Unist’ot’en for occupations of politicans’ offices starting on Jan. 31, dozens of local residents turned up and blocked traffic at NDP Finance Minister Carole James’ office on Fort Street, and NDP Education Minister Rob Fleming’s office on Hillside Avenue. These particular actions were not publicly announced, yet both offices were preemptively locked during their normal opening hours. This may indicate that the government’s constituency offices (often branded as “community offices”) are being disrupted on an ongoing basis — under threat of occupation — and perhaps even shut down for indefinite periods of time defensively, as has been reported about the frequently besieged and occupied office of Nelson MLA/NDP Minister of Energy, Mines and Petroleum Resources Michelle Mungall.

Huge shout outs to these nearby actions!

Banner drop in Bellingham on Jan. 8 https://pugetsoundanarchists.org/stand-with-unistoten-banner-drop-in-bellingham-wa
Banner drop in Seattle on Jan. 8 https://pugetsoundanarchists.org/stand-with-unistoten-banner-drop-in-seattle-wa
Blockades in Vancouver, BC of the port on Jan. 9 and the railway on Jan. 16 http://thevolcano.org/2019/01/30/provincial-party-politics-and-the-invasion-of-wetsuweten-the-bc-ndps-special-role-in-the-settler-colonial-state
RCMP Commissioner Confronted & Disrupted in Unceded K’omoks Territory on Jan. 24 https://bcblackout.wordpress.com/2019/01/25/rcmp-commissioner-confronted-disrupted-in-unceded-komoks-territory

For more information on this ongoing struggle: 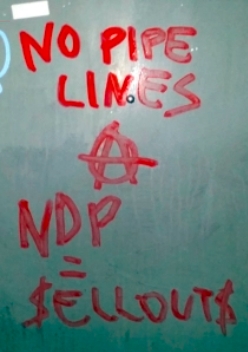