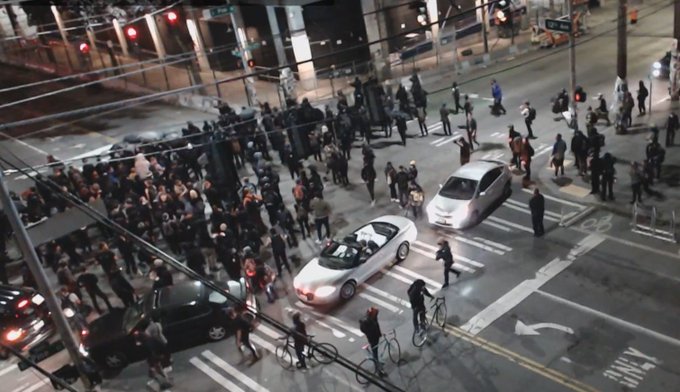 On Monday night, August 24th, a crowd of roughly 200 in black bloc gathered at Cal Anderson Park ready to march. The park has been the site of multiple stand-offs with the police recently, as a previously unoccupied shelter-house in the park has been cracked open and taken over to provide hot meals and shelter for unhoused people. Police have multiple times swept the park and arrested anyone literally caught in their way, yet the occupation of the building continues, providing much needed support services for the most vulnerable in our community at the height of a pandemic.

After a joyous round of warm-ups, the crowd began to assemble in the street and immediately marched on the nearby East Precinct. Chants of “Say His Name, Jacob Blake!” rang through the air as the recent police-shooting in Kenosha, WI and the subsequent uprising filled the backdrop of the evening. Police were seen withdrawing further into the precinct as the crowd approached, and graffiti newly decorated the concrete barriers that were put up in response to sustained community vitriol against the police.

The demonstration proceeded through Capitol Hill and the Amazon Go grocery-store was reportedly attacked. This Amazon Go location has been attacked several times since the beginning of the uprising in connection to Amazon’s ties with providing funding to ICE.

Once the demonstration arrived at the West Precinct, graffiti sprung up all over the concrete barriers that serve to protect the building, reading “Bunker Bitch,” “Go Mariners,” “ACAB,” “Fuck 12,” as well as “40% of the ppl who work here beat their spouse google that shit.”

A police bus that was left unattended had its windows smashed out as well as fireworks set off inside of the vehicle, causing smoke damage.

The nearby Starbucks was attacked, leaving behind smashed glass windows. The connection between Starbucks’ funding of local police departments nation-wide to the current anti-police uprising has been made countless times in Seattle, as almost every Capitol Hill Starbucks location has been forced to close due to sustained attacks and looting.

The demonstration then made their way back to the East Precinct, where multiple fires were set near the building.

By dragging dumpsters and setting fires in the streets, the crowd was successfully able to halt the police pursuit, but not before 4 people were arrested. One person has been charged in connection to one of the fires at the East Precinct, and is currently in federal custody.

Meanwhile, two individuals attempted to set fire to the Seattle Police Officer’s Guild with molotov cocktails. The SPOG building is located in a neighborhood a few miles south of where the demonstrations took place.

Love to the street fighters showing their way with endless courage! Endless hatred for the police! Solidarity to all imprisoned rebels!