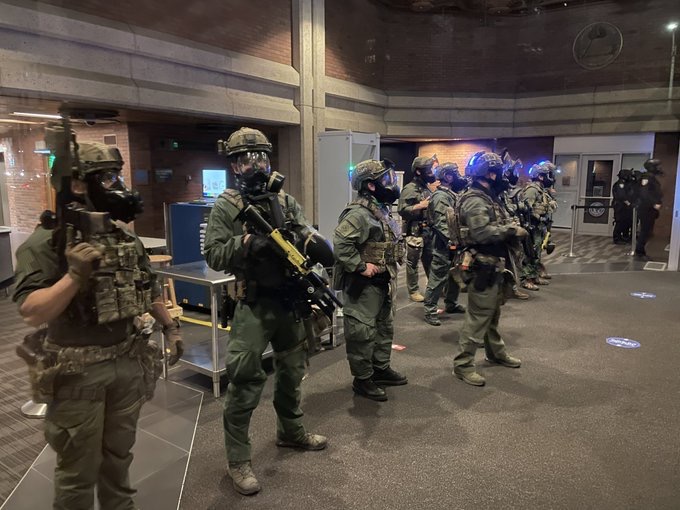 In Seattle, a group of about 150 protesters in black bloc burned an American flag outside the immigration court on 2nd Ave, smashed a window at the Amazon Go. Police are now trailing. pic.twitter.com/rfO89MrHhH

Responding to a call for an anti-ICE demonstration to ring in the inauguration of Joe Biden, a bloc of a little over 100 gathered in Occidental Park. While the turnout may come as a disappointment to some as the centrists and liberals have immediately reverted to “going back to brunch” and relieving themselves of any responsibility to continue taking action against the nightmare world we live in, the bonds formed throughout the uprising of 2020 were on full display to those who knew where to look. People reconnected with friends they hadn’t seen since in a while, fed each other and any other nearby community member who needed a snack, shared some laughs while talking tactics, and prepared to move out.

The march immediately began heading north on 2nd Avenue, ignoring the Henry M. Jackson Federal Building which houses Social Security, immigration court, and other federal offices and which later in the evening would play host to heavily-armed DHS officers who many have speculated were from the infamous BORTAC unit which people opted not to confront. The march instead went one block further north directly to the tower between Spring and Madison that houses the local ICE office. It is worth noting that this building is owned by local real estate mogul, billionaire, and ardent Trump supporter Martin Selig. Upon arrival at the ICE office a massive American flag was torched in the street as the building was redecorated. Flyers decrying Joe Biden’s crime bill and so-called “Rave Act” flew through the air as the beautiful sounds of deconstruction rang across the block. While there was not yet any appreciable police presence visible in the street, the crowd decided to quickly continue moving.

Arriving at the Amazon Go store on 5th Avenue, the bloc paused to once more take the initiative to redecorate the space. Amazon continues to directly support DHS and ICE by providing AWS hosting services to Palantir whose software is used to catalog, track, and thus terrorize immigrants. This tacit support for the deportation machine has been incredibly lucrative for Amazon, netting them billions of dollars in contracts. With this fact in mind people expressed their outrage at the local tech giant with paint and hammers, making it clear that so long as Amazon chooses to continue supporting the concentration camps there will be consequences. Police sirens could now be heard in the downtown core but still there was not yet any sign of them within close proximity to the march.

On this tour of Seattle, courtesy of a small group of antifascists, cops line up to protect an AmazonGo. pic.twitter.com/47AGJy5zfi

The rowdy crowd once more began moving and passed by the William Kenzo Nakamura Federal courthouse where some more creative expressions of rage were initiated. This observer could not help but smile at this particular sight for it was similar such activity at May Day 2012 that prompted then US Attorney Jenny Durkan to convene the grand jury that was fiercely resisted by the community. The ungovernable spirit is truly alive and well in so-called Seattle and no amount of repression over the years appears to have been successful in breaking it. It is through our close bonds, our careful attention to security culture, and our steadfast commitment to anti-repression work that has made this possible and every rebel within our community would do well to remember that fact and act accordingly.

Once the courthouse was targeted, SPD quickly moved in on the crowd with several van-fulls of riot police pulling up behind the bloc and multiple bike squads forming up adjacent to the crowd across I5. The collective intelligence of the bloc led them to Freeway Park which seemed to somewhat confound SPD. The bike squads stood pensively at the corner of 8th and Seneca, trying to figure out where they should go while lieutenant Brooks of the CRG sat uselessly in an unmarked vehicle on Pike in front of the convention center desperately trying to figure out where the bloc was.

It was at this point that many within the bloc, as well as this particular observer, took heed of the concept of “being like water” and opted to safely disperse. By the time the crowd reformed on Union, it was about half of the size that it was when the action had begun an hour earlier. Those remaining chose to continue marching throughout the downtown core, targeting the Starbucks tourist trap at Pike Place Market (presumably due to their continued contributions to the Seattle Police Foundation which helps pay for the munitions and tools used to maim us) and passing through the main Amazon campus which at that point was overwhelmingly protected by SPD officers. While the dedication to keeping the party going is impressive, so too is the idea of getting out before the police can properly deploy their repressive apparatus. Being like water will look different at every action depending on an infinite number of variables but first and foremost it means knowing when to call it quits. I say this not to disparage the fearless wild ones who kept going for several more hours that night but just to keep this fact at the front of our minds. With Biden in office and liberals pushing for new laws and federal attention directed at “extremists”, it is more important now than ever before that we take care to ensure that we can safely leave actions and dispose of anything that may link us back to them should warrants be served down the line. Anarchism is a life-long marathon, forever running toward a horizon which may very well never be reached or fully realized in any permanent way but we need to be doing everything that we possibly can to keep ourselves and each other in the race toward total liberation.

March coursing through the Market. They hit the OG Starbucks. pic.twitter.com/zv1Gqmz3Jk

For a world without borders, hierarchies, and cops,