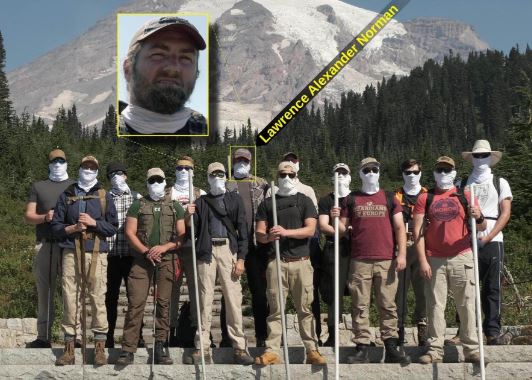 Lawrence Alexander Norman of Prospect, Oregon is a member of of the white nationalist organization Patriot Front. Norman has been photographed attending and participating in the group’s PNW meetings and trainings. Members of Patriot Front are assigned a two part call-sign with a generic name and their state. Lawrence Norman is known to the group as Frederick OR.

For those unaware, Patriot Front is a rebrand of Vanguard America, the group responsible for the murder of Heather Heyer at the 2017 Unite the Right rally.  In the image below, the Patriot Front’s leader, Thomas Rousseau is standing next to James Alex Fields, the man who drove a car through a crowd, killing one, and injuring dozens of others. Patriot Front are self-described white nationalists who actively target and harass communities of color. The in the Pacific Northwest, PF members have recently defaced LGBT and BLM memorials  in Portland and Olympia, and have distributed threatening messages at people’s residences.

The following pictures and information were obtained during infiltration operations within Patriot Front. Other individuals identified during these operations include:

These infiltrations have also resulted in several of the national group’s calls being disrupted and leaked. You can find audio of them courtesy of WANaziWatch and Atlanta Antifa.

Lawrence has made appearances at Patriot Front’s events in the Pacific Northwest. He notably helped the group during their defacement of the aforementioned Black Lives Matter mural in Olympia, Washington. He (and his stupid fucking manbun) can be seen in the following stills taken from videos recorded during a practice session and  during the vandalism itself.

Lawrence during the practice session:

Lawrence during the mural defacement:

He also joined the group for a banner drop in Olympia, Washington while wearing the same brown Carhartt hoodie as in the above photos. The banners in this instance was quickly confiscated by Antifascist activists following the group.

As one of just a few currently active Patriot Front members in Southern Oregon, it is almost certain that Lawrence has been responsible for several instances of racist propaganda claimed by the group through the region. It is worth noting that the symbol that appears in the graffiti below is a “Fasces”, a bundle of sticks wrapped around an ax, for which fascism is named.

Stencils and stickers in Ashland:

Stickers in Shady Cove and Roseburg:

We have also documented Lawrence’s participation during one of the group’s hikes at Camp Muir in Rainier National Park. He can be seen in the following photos:

On 12/4/2021, Patriot Front attempted to host a flash rally in Washington D.C.. The group marched for about an hour and a half, but were left shivering behind a line of cops in the center of a roundabout for nearly three hours as they waited to to illegally pile into the back of their rented U-Hauls. According to “journalists” on the ground, the U-Hauls got lost on their way to pick up their chilly “brothers”. Our sources within the org have informed us that Lawrence was in DC that night. We can only hope he had as bad of a time as the rest of the group.

If you or anyone else has information regarding Lawrence or his compatriots, don’t hesitate to reach out to us at CVAntifa@riseup.net. Due to the publishing constraints of this website, more of Lawrence’s personal info can be found HERE.

For members of Patriot Front reading this, we assure you, the worst consequences of these infiltrations have yet to come. There is still time to leave this dumbass MLM and make something worthwhile of your life. You will find no satisfaction or glory following the leadership of an insecure loser like Tommy Rousseau. Leave organized fascism NOW before it is your life that’s ruined.