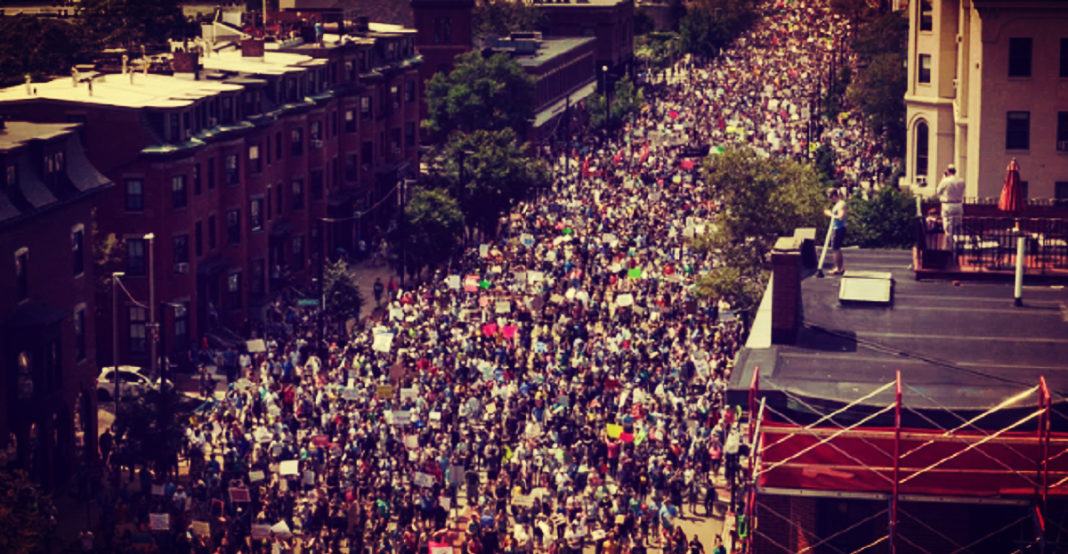 There’s a lot happening this weekend. Starting today, people in Tacoma are calling for backup in the face of threats from Patriot Prayer that they will disrupt and attack those protesting outside the ICE facility.

#OneMillionFlames continues into its fourth week tonight. @Occupy_NWDC and other Occupy/Abolish ICE groups across the country will hold their fourth weekly vigil tonight. Please join us at 9 for our cacerolazo and 9:30 for the vigil. pic.twitter.com/NO5PqlqNMT

In Portland on Saturday, a massive popular mobilization, or the “Pop Mob” is coming together on Saturday, in order to support the community defense work of antifascists and also to counter en masse the Patriot Prayer rally happening along the waterfront. It is unknown how many people are going to show up in support of Patriot Prayer, however they have been promoted heavily on InfoWars and other platforms, and we know that members of the far-Right and the Alt-Right are mobilizing across the country to attend.

@RIagainsth8, a coalition of anti-racist, anti-sexist, pro-LGBTQ, anti-fascist, socialist, labor, and community organizers will host a counter-demonstration to oppose a rally by a far-right umbrella group known as “Resist Marxism”.

Also on Saturday in Providence, Rhode Island, people are coming together to counter “Resist Marxism,” a pan-far-Right group which includes out right neo-Nazis.

Mind the time change – meet at Ohlone at 11am on Sunday August 5! Before you go, check out this post and review these tips for staying safe while protesting the alt-right 🙂https://t.co/obFlMxf6vj pic.twitter.com/WKTa4FUCKj

These rallies will set the tone for the upcoming Unite the Right demonstrations in Charlottesville and DC, which will then be followed by rallies organized by Resist Marxism on August 18th. In other words, it’s important that we all not only support these mobilizations, but do everything we can to make them big, successful, and keep each other as safe as possible.

As we recently argued in a larger text, the far-Right is attempting to reconstitute a broad street fighting force who’s principle aims are to attack whatever is seen as ‘the Left,’ and support the Trump presidency. At the same time, the Trumpian State moves to support grassroots far-Right movements more and more, while under the pressure of the Mueller investigation (not that we place any hope or faith in the Democrats or FBI) becomes more and more unstable and afraid.

This year on AUGUST 11th FROM 7PM TO 9PM, we are reclaiming the NORTH PLAZA OF THE ROTUNDA (jefferson side) and demanding justice.

With our eyes towards this weekend, we present the following interview with someone from Pop Mob, or Popular Mobilization, which was formed after the violent Proud Boy and Patriot Prayer rally on June 30th. Pop Mob is a broad coalition of faith, community, labor, and antiracist groups which are uniting to mobilize against the Patriot Prayer rally on August 4th.

But first, let’s get to the news!

Lots of people came out with Tacoma Against NAZIs tonight to tell the white supremacists at Tac Town Tattoo that they aren’t welcome. It was great to join everyone.

The NAZIs hid behind their little kids like human shields, giving them “white lives matter” signs. How gross. pic.twitter.com/EZEMTZ5z3b

More cops just arrived with a police bus. What are they trying to do? We are worried about our comrade who was just beaten/arrested by police. pic.twitter.com/hAasa7O5CP

Hey comrades!! Camp is still up and running at Arch & Broad and they could use water!! Please help if you can #OccupyIcePhl #abolishICE

This was from Thursday’s vigil at the Portland ICE building, the first protest since the police cleared out the Occupy ICE PDX encampment. Over a hundred people came out with @IMIrJ1 and @OregonCareWorks to talk about immigration as a care issue. pic.twitter.com/IkzCbtUhcr

Pt2 Scenes from #OccupyICE #Denver camp. Our community showed up for one another before and after the swat teams, riot cops, & the national guard made arrests (all arrested were released!). #AbolishICE #keepfamiliestogether pic.twitter.com/JfAXtNectU

The magic of the movement: a couple families see us when driving by, and took the time to join the protest. Together, we will #AbolishICE pic.twitter.com/qUt01NqtE4

Despite it being hot AF today, the Anti-Gentrification Free Store took place at Leimert Park Art Walk and was well attended. We want to thank everyone who donated items beforehand and those of you who brought items out to the space. pic.twitter.com/EMSAK8DLeg

the Yacht Club Nazis also visited @MSUDenver earlier this week and antifa was quick to remove and replace it again. No Nazis on our campuses and get out of our towns! @IGD_News @TorchAntifa pic.twitter.com/Fv50hQKZpf

Aquatic Park, before and after. #antifa pic.twitter.com/LPXZSQaWQw

Max is scheduled to be released later today after spending 48 hours in jail for locking down to MVP equipment in June. “The company’s laws and the company’s courts have no standing to cast judgement on me for doing what I know to be right” #NoMVP #NoPipelines pic.twitter.com/xPrETQCZR3

BREAKING. Police just arrested an indigenous water protector kayaking near a Bayou Bridge construction site in the Atchafalaya Basin. The water protector was NOT trespassing when they were wrongfully arrested. #NoBayouBridge #StopETP pic.twitter.com/4TtFCq84dw

It’s Day 15 of the tree-sits that are blocking the path of the Bayou Bridge Pipeline. ETP’s heavy equipment is destroying the ancient trees just north of us. Meanwhile, our brave water protectors continue to inhabit trees just up the easement. #NoBayouBridge #StopETP pic.twitter.com/XvLgwLy1Yf

BREAKING – New aerial blockade launched! A water protector is sitting in a sky pod that is tied to several trees that are in the path of the Bayou Bridge pipeline. The sit is set up directly in front of ETP’s tree-clearing equipment. #NoBayouBridge #StopETP pic.twitter.com/NrldLPeZNQ

Views from the Atchafalaya Basin where we are resisting the Bayou Bridge Pipeline on the ground, on the water and in the air. #NoBayouBridge #StopETP pic.twitter.com/PA4pY6T6h4

Thanks to everyone who joined us in demonstrating at @BankofAmerica today over their financing of Energy Transfer Partners and the Bayou Bridge Pipeline. #NoBayouBridge #StopETP #RiseTogether pic.twitter.com/TeUsueMa4h

a small number of Latino workers (millwrights, welders, and conveyor installers, in his telling) working for a different contractor but in the same hub were ordered home after disobeying the orders of a white boss he calls racist.

In response, the entire group of workers — over a hundred, in Dangerfield’s estimation — walked out.

The #CedarResistance has inspired other tenants to continue the fight for tenant rights and protections! pic.twitter.com/h3cmodyuiq

Identity Evropa bussed in a couple dozen neo-Nazis to terrorize Washington Heights with their hateful message against immigrants.
Tonight the NYC community brought out hundreds to say that shit isn’t welcome here. 🖤🏴🏴✊ pic.twitter.com/KYkSLyucXP

Red Fawn is now at FMC Carswell in Texas and will likely serve most if not all of her sentence there. Please take time to write to her:
Red Fawn Fallis #16358-059
FMC Carswell
Post Office Box 27137
Fort Worth, Texas 76127 pic.twitter.com/OqB3QnpJ2k

Happy birthday to Eric King! May the candles on the cake burn as fierce as molotovs. https://t.co/NI2lrvqNqE pic.twitter.com/nfhS0GngD5

A year later and UTR participants are still getting fizzed. To any Nazis planning on coming out to Charlottesville or DC next week: Is it really worth losing your job, your apartment, or being disowned by your family to attend another Kessler rally destined to fail? Probably not https://t.co/eE3pfhOBMH

Workers at Tata Steel Minerals’ Schefferville mine, near the Labrador-Quebec border, have been sent home after a blockade was set up by members of a local First Nations community.

Five hundred fathers being held in an immigration detention facility in Texas after reunification with their children announced a hunger strike Wednesday, out of frustration and despair over being “restrained from our freedom as human beings,” as one father put it.

The fathers involved in the strike planned to sit down in three public “patio” areas within the Karnes Residential Facility, one of the family detention centers in Texas in which reunited families are being held, and refuse food. Their children have also agreed to a modified strike in which they refuse to participate in activities.

That is gonna do it for us today, see you in the streets!