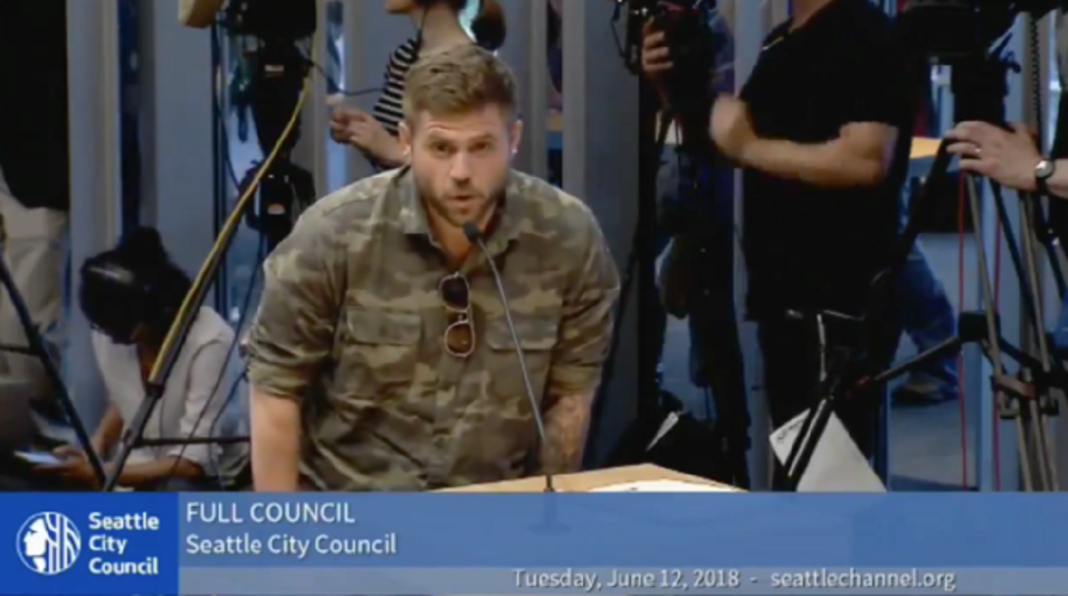 Social media exploded with a “father, a veteran, and an anarchist” addressing the Seattle City Council over a contested vote on getting rid on a per-employee ‘head tax’ on big corporations that would have been used to create affordable housing for the homeless.

As one report wrote:

Just a few weeks after enacting a so-called “head tax” Seattle’s City Council voted 7-2 to repeal it. It would have charged big businesses around $500 for each of their full-time employees in order to fund affordable housing and services for the homeless, but facing opposition from corporations like Amazon, local politicians blinked. According to GeekWire, Councilwoman Lisa Herbold said the repeal vote happened because “This is not a winnable battle.”

Amazon had paused work on a new HQ in the city after the original proposal came up, but resumed construction after a compromise dropped the fee to $275 per employee.

Forces against the levy (including Amazon and Starbucks) were funding a “No Tax on Jobs” campaign to put its fate on the ballot in November, and the Council believed it did not have the resources to win.

This is a process that has played out time and time again, where big corporations call the shots at city hall, passing legislation, new laws, and directing policy that has monstrous effects on the rest of us.

Far from a gift of “creating jobs,” as if the crisis of the modern age was lack of work in the service sector, Amazon’s HQ will lead to massive gentrification and displacement of a broad section of the working-class, poor, and homeless population. The most jobs it will create will be in it’s factory “fulfillment centers” which are almost on par in terms of wages as factory workers in China, as well as gig economy workers who deliver packages in their own cars, until they are replaced by drones.

A new zine titled “Against Amazon and it’s World” can be found ready to print and distribute here.

The pushing out of poor and working people from metropolitan cities is coupled with the rise of Amazon becoming one of the largest US employers, as well as Jeff Bezo’s rise as the richest man in the world and an influential player among the neoliberal class.

But moreover, what is happening in Seattle should show everyone exactly who gets to call the shots in this society: the very wealthy that control vast amounts of resources and capital. Moreover, the end game of the tech elites is one in which millions toil for low wages in vast factories, or are shipped into massive metropolitan cities from the outlying areas they have been displaced to, in order to complete menial tasks for the mega-rich who can still afford to live there.

But the Amazon debacle also shows the inability of the “official Left” to do anything to stop this disaster. For instance, some trade unions even backed Amazon, claiming that they offered fair wages for construction workers. Kshama Sawant of Socialist Alternative and Seattle City Council member, who opposed Amazon, called on people to simply pressure “progressive” Democrats to support the tax; Democrats who later quickly changed their mind and sided with Amazon.

Only mass action, from the grassroots up, can hope to put a wrench into this machine, not hanging our hats on the institutions and individuals who have sold us out for generations.

The US just had its hottest May since the dust bowl, as horrific news of ramping authoritarianism in communities of color continues. The New York Times wrote:

Just last week, we learned that a teenager from Iowa who had lived in America since he was 3 was killed shortly after his forced return to Mexico. This month, an Ecuadorean immigrant with an American citizen wife and a pending green card application was detained at a Brooklyn military base where he’d gone to deliver a pizza; a judge has temporarily halted his deportation, but he remains locked up. Immigration officers are boarding trains and buses and demanding that passengers show them their papers. On Monday, Attorney General Jeff Sessions decreed that most people fleeing domestic abuse or gang violence would no longer be eligible for asylum.

Moreover, according to Splinter News:

Meanwhile, across the US, as violent crime is down, the amount of young men of color being added to gang data bases is climbing. According to The Intercept:

The New York Police Department has quietly expanded its gang database under Mayor Bill de Blasio, targeting tens of thousands of young people of color for increased surveillance even in the absence of criminal conduct.

New Yorkers have been added to the NYPD gang database under de Blasio at a rate of 342 people per month, nearly three times the rate of the prior decade. That’s despite both historically low crime levels and the fact that gang-motivated crime makes up less than 1 percent of all reported crime in New York City.

In other cities, the adding of so many people to data bases has led to massive errors. One report wrote that in Chicago the gang data bases include:

We live in a time when crime is down, and thus the State, like a corporation always needing to expand, thus goes out and creates new criminals.

In more uplifting news, capitalism is increasing the suicide rate:

The fact that more than half of these suicides were not attributed to any mental illness in a majority of states for at least one year of the period the CDC studied is remarkable, and begs the question of what other factors led to thousands of Americans taking their own lives. CDC researchers discovered that, outside of problems with intimate partners, the prime causes of suicide for Americans with no known mental illnesses were primarily financial in nature.

It’s time to end this grinding down of ourselves and the living earth into dust. If modern life is nothing but struggle and fighting just to stay afloat, then why not fight for our own interests, on our own terms, with those all around us going through the same things. Let’s struggle for a life worth living, not just simply to keep our heads above water.

On Sunday June 10, a comrade, ReeAnna Segin, was arrested for exercising their First Amendment rights by allegedly attempting to burn a “Blue Lives Matter” flag at the Philly Pride March. She was charged with arson, causing/risking a catastrophe, and other misdemeanors, and released from CFCF (a men’s prison) at approximately 5pm on Monday…This incident highlights why cops should not be allowed at any pride parades.

Fellow Workers in IU650 are now fighting back against a lockout by their employers, Grassroots Campaigns Inc. This company has refused to honor the contract signed with the workers and now has refused to let the workers make a living. These blatantly unfair labor practices are why we must all stick together in solidarity to fight back against the companies that treat us like disposable labor and see us only as numbers on a spreadsheet.

Banner drop on #Vanderbilt , against White Supremacist Virginia Abernethy across from her office. Day 1 of “Action Week” was a success. pic.twitter.com/vvfwVDZh3R