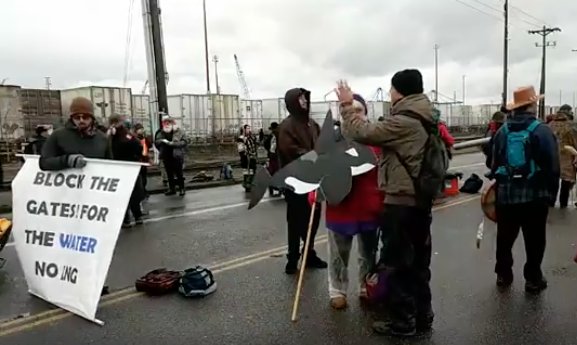 150+ Water Protectors are still blocking all entrances of the construction site to the LNG facility in Tacoma, WA.

Reasons to oppose this project include

You can voice your opposition to the project by signing this petition: here

The action comes four days after a Tacoma jury acquitted two women who locked down to construction equipment last May — the jury found them not guilty because they said they could not tell whether the action took place on Puyallup territory or City of Tacoma-owned land. The action also comes four days after activists used tripods to block all three gates to the site in the early morning and a week after two men kayaked across the Hylebos Waterway, scaled a fence and climbed a crane to halt construction of an 8-million-gallon gas storage tank.