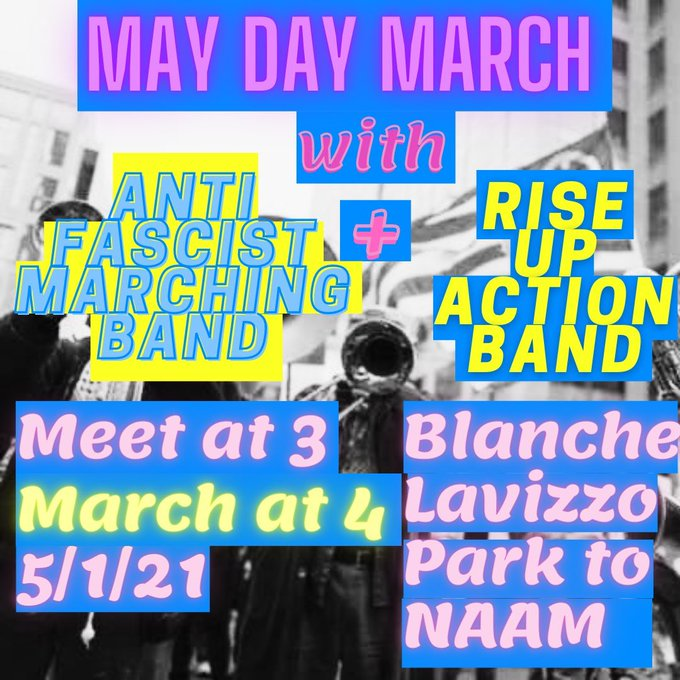 Several hundred turned out for the March and Rally for Immigrants and Workers Rights, running since the historic 2006 May 1 General Strike. The march started at noon near Judkins Park and wrapped up downtown. Put on by a coalition of Parties, NGOs, and a few unions its atmosphere was small but festive with no incidents.

Starting around the same time was a march demanding Starbucks
#BoycottEthiopianCoffee to stop #TigrayGenocide. A crowd of antifascists and East African community members gathered at Volunteer Park for a brief speakout. A crowd of around fifty on foot and sizable group of bikes and cars headed towards Broadway, chanting and passing out flyers along the way. The group stopped outside a grocery store with a Starbucks for several minutes with chanting, speaking, and flyering. It passed another Starbucks up the road and did the same. The crowd found that all of the Starbucks stores in Capitol Hill and Downtown were closed at 1pm that day. The group turned down Olive Way where a Starbucks was at Summit St.

A couple posters were put up at the Starbucks and the group was in the street chanting. Seattle PD suddenly attacked with ~100 officers from several directions. Several people, including some elders, were injured. Bikes were broken, signs and banners stolen. The police targeted and assaulted a black member of the crowd, and arrested another person. Two workers from the cafe across the street, perhaps on break, were arrested wearing their kitchen aprons. SPD claimed a nonexistent spraypainter as their excuse for the vicious assault. The #TigrayGenocide crowd dispersed after holding space as those arrested were taken away.

Soon after, an autonomous march of 50-100 began at Seattle Central around 2pm. A bloc went around Capitol Hill and Downtown for several hours, at times blocking pursuing police with items, and later reportedly throwing objects at SPD. Several arrests were made during the march, and as some dispersed into Cal Anderson Park SPD targeted a group of four for a vicious arrest. One protestor was hospitalized.

There were also a couple smaller marches. One to the Northwest African American Museum where a black radical elder has been camping out to protest recuperation for months. Another was the weekly DDL #landback march. No serious incidents or arrests occurred at either.

In the evening a small public action was held in the area outside the East Precinct, where SPD was getting ready to remove their fortress-wall after almost a year of #GeorgeFloyd Rebellion. While holding the precinct intersection a driver deliberately drover into the protest. The driver continued with a person on their hood for two blocks. The person hit was arrested and the driver went free. A few more arrests occurred from this action.

Throughout the day, anarchists and other community members also supported homeless neighbors with food, gear, and other objects at several mutual aid projects around the city.

There may have been other small autonomous actions around the city, but a motto from local blocs applies: “Didn’t See Shit, Don’t Know Shit”

As the struggle to #AbolishPolice continues, its worth reflecting how SPD’s response has evolved. The vicious new CRG protest task force was on full display today.  Seattle has long been a training ground for policing tactics; other cities take notes.

Many arrestees were out by #MayDay evening, with all released by the early hours of Tuesday morning.

Despite waning numbers in the streets amidst covid and liberal apathy, people came out for May Day. Seattle Police were vicious, grumpy none of them are allowed the holiday off. But diverse, decentralized, simultaneous actions were taken in the fight for total liberation.