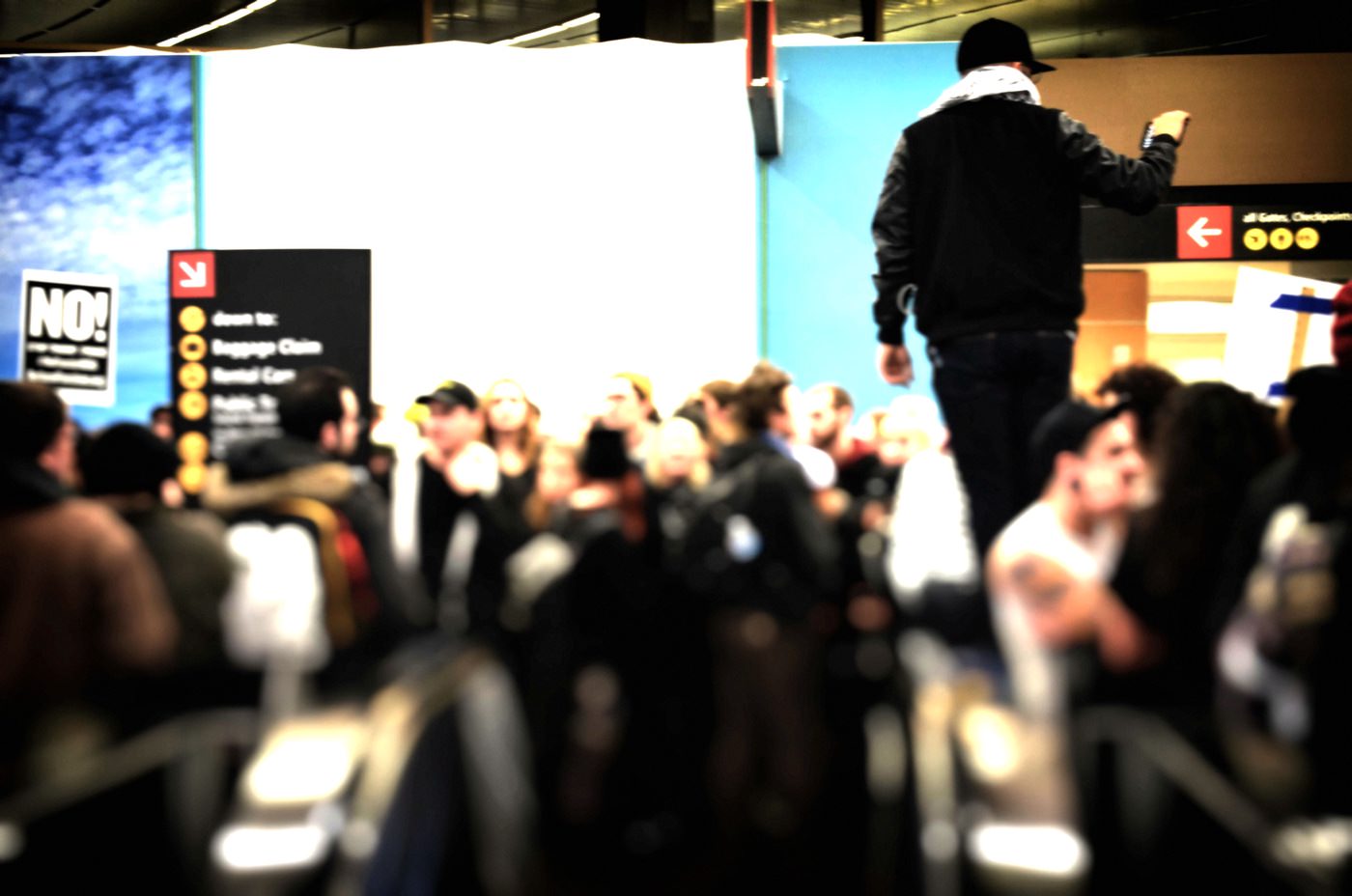 You Don’t Get to Protest When It’s Convenient

When my partner and I first got to SeaTac, it took some time to get oriented and figure out what actions were taking place. We eventually found a gate that wasn’t fully shut down yet and moved to help with that. As we arrived at the gate, a very nice looking woman with a stroller showed up, wanting to make a flight. A few people started shouting, “Let her through!” and through she went. I get it, she looked tired, had a child, and was very nice with saying “please” and “thank you.” However, we were there to SHUT IT DOWN, not SHUT IT DOWN OCCASIONALLY.

Most of the others there were on the same page. A group of people moved and cut off the line of passengers who tried following the woman in, fully blocking the entrance.

Soon, a woman came over and informed us that people were being let in through some side entrances. She was looking for people willing to be arrested to block those. My partner and I followed her.

The gate we ended up at was blocked three rows deep with protesters. There wasn’t much going on. Some ACLU observers were informing everyone about the legality of blocking this entrance. Nobody seemed too worried.

A white woman wearing a pussy-hat walked her stroller bag right up to the line of bodies. She seemed to think we would part for her, but instead we explained, in chorus, “The airport is closed!”

Someone responded, “You don’t get to protest only when it is convenient for you!”

She left and people cheered.

Things seemed very low-key for an “arrestable” action. It got a little tense for a second when a Kent cop walked into the crowd announcing that he needed access to the entrance. He was on the opposite side of the line from me, trying to intimidate a couple young women.

He couldn’t. Their voices never quavering, they compelled him leave.

After several minutes, people from the next gate started coming over to tell us that they were arresting people there.

The people at our gate started getting skittish and leaving.

I understood, even if I found it disheartening. Most of the people at our gate were young (maybe high-school age), not white, and not men. Unlike the pussy-hatted white woman, they knew there is no such thing as a good cop.
Arrested (or, Forcibly Removed Without Being Charged)

There still wasn’t much going on at our gate, and enough people had peeled off that we didn’t even stretch across the entire entrance. Someone came by with news: “People are getting arrested at gate A and we need people to hold the line.”

My partner and I moved over there and I joined their line. Soon afterwards, a group of cops pulled me backwards from behind and threw me to the ground. I locked my own arms, and was surprised when the cops couldn’t separate them or turn me over.

That satisfaction didn’t last long. I heard a cop on the group on top of me say, “Here, use the stick, use the stick.” I don’t know if he was bluffing or not, but I was too scared to find out. I flattened out, a knee was dug into my shoulder, and my hands were zip-tied.
“Nice” Cops

Sitting against the wall, removed from the action, things got weird. Some of the other arrested protesters started conversing with the cops. Exchanging niceties. Saying “please” and “thank you,” throwing jokes back and forth. The cops kept saying, “We’re just trying to keep everyone safe.” Empty words when they are the only ones threatening violence.

One protester got the cop into a conversation.

“What would you do if Trump actually outlawed protest? Made it completely illegal?” asked the protester.

“He can’t do that,” answered the cop.

“They said he couldn’t do a lot of things, yet here we are! But answer me — if the law was that protest was illegal, what would you do?”

“If it was the law, then I would have to enforce it. That is what America is built on, laws.”

“Can’t wait to see y’all at the next Nuremberg trials,” I snapped.
The Kids Are Alright

I was a bit demoralized by the time they finally stood us up and marched us to a van. The friendly back-and-forth between some of the protesters and the cops had continued and I was annoyed at how often the name of a local socialist councilwoman came out of the mouths of the protesters.

Once in the van, however, the conversation cheered me up.

Sawant seems to have undermined her own reputation. I guess she had called for people to assemble at a park in the city instead of at SeaTac. That brought her into question in the minds of these other protesters.

I also (finally) realized these were all young people, and they were fearless, smart, and mobile. Some had come down from Bellingham. They planned out how to handle things if we were charged, started exchanging numbers for future actions, and talked about their homework.

It was clear that they were not scared and not going to stop.

In retrospect, the weird conversational vibe between them and the cops wasn’t so weird. For most of them, this was their first experience with confrontational action, their first time being thrown to the ground by a cop. They were just asking “why”:

They may have still had some illusions going into this protest — illusions about police, about “reform,” about hierarchy and power. After this protest and the future actions they are determined to participate in, I have no doubt they will come to understand the police better.