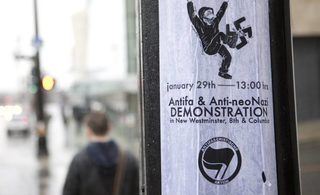 The crowd included unions and organisations such as the Industrial Workers of the World (IWW), the Canada Employment & Immigration Union, the Public Service Alliance of Canada, the Coalition Against Bigotry – Pacific, and Vancouver Antifa. Roughly half of the crowd was masked up. CTV News, Global News, and the Georgia Straight were present.

3 neo-nazi’s were lurking not too far away although they kept their distance – they were seemingly itching for a rumble. On social media, some reported that more neo-nazi posters were put up in New West after the rally. Two Slav-traitors from the UBC Free Speech Club, including Luka Ontojic and someone who appears to be his older brother, walked along the march in opposition on the sidewalk.

There were about 20 New Westminster Police Department officers on foot and in cruisers surrounding the un-permitted march through downtown New West.

While we hoped to march for longer, this event was as successful as it could be; no one was attacked, we forced Luka from the UBCFSC out of the crowd, and communities stood together undaunted by nazi scum. We acknowledge that this was a symbolic protest, but are optimistic about the future of anti-fascist anti-racist organising as we have seen a steady increase in attendance at rallies over the last few months. We feel strongly that we need to strengthen our communities through trust and co-operation, we must hold more demonstrations throughout the Lower Mainland, and also diversify our tactics in responding to the increasingly prominent fascist and racist political rhetoric being disseminated.

Students should be organising themselves on & off campus against this recent surge of neo-nazi’s, white supremacists, and fascists.

If you wish to be involved in the Vancouver Antifa Security Collective – to help with security for shows, events, and talks at DIY/radical/leftist spaces please send an email to us (not through facebook) with contact information.