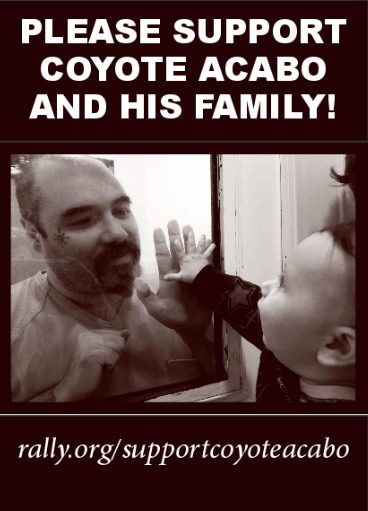 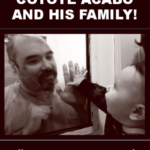 Anarchist Coyote Acabo who was targeted by the state for his anti-racist and anarchist activity is currently doing time in Yakima and is looking for support in the form of money on his books. His family is also suffering without him and has come under attack by reactionaries. The quote below is from his rally.org fundraiser which can be found here: https://rally.org/Supportcoyoteacabo

“Coyote Acabo is currently serving time in a Yakima jail accused of defending a Black Lives Matter action from a drunken reactionary assailant. Coyote has spent his entire life fighting against domination, racism, and exploitation and being locked up in various institutions targeted both because of his rebellious behavior and due to his latinx ethnicity. Despite facing trauma and repression Coyote remains alive with the spirit of love and revolt. Though it’s been a bumpy ride to say the least Coyote has taken steps to work on his own internalized oppressive behavior and incarceration is a major obstacle in his healing. Currently Coyote doesn’t have much money on his books so he is forced to subsist on the low quality food served in the jail. Putting money on his books would allow him to have access to the superior commissary food. Coyote is a comrade who came out to support the struggle for liberation let’s come out and support him.

Coyote’s family was already facing the misery that comes with life of poor people under capitalism and the life of marginalized people under the current social order. Since Coyote was taken away from them and locked in a cage it has become increasingly difficult not only due to Coyote being far less able to support his family, but also do to increased economic and abusive attacks on his family by, the informal agents of the ruling order, bigots. Since basic needs are not guaranteed under capitalism nor by the state we are the only ones that can guarantee our comrades are not crushed by repression or left to die by the economy.

Coyote and his partner are both people with disabilities which the capitalists think makes them unworthy of a making a living and since Coyote’s jailing has deemed more and more unworthy of state support. If you have the ability to financially support these comrades and their family please do so. Support them out of guilt or some militant duty if you must, but also support them in the spirit of mutual aid because our liberation is bound together and we are only as strong and vibrant as our community, because an injury to one is an injury to all. Our comrades are not to be pitied. This is solidarity not charity.

Incarceration does not just hurt those who are locked up: it hurts their communities and families as well. The struggle for liberation is not just a series of attacks that come out of the void, but also an infrastructure of support that both supports a freer and more desirable life here and now and efforts to actualize the destruction of the logistics of exploitation and oppression.

From each according to ability and to each based on need!

Here’s a link to a recent interview with Coyote: https://itsgoingdown.org/interview-re-imprisoned-anarchist-coyote-acabo/

Here’s a link by an older more personal and in depth piece from a previous incarnation of this fund-raiser: https://pastebin.com/DSbtt7H3”

Here’s a link to another interview with Coyote conducted in 2014 on his experiences with long-term incarceration: https://itsgoingdown.org/relentless-interview-coyote-acabo/

Again the address for the fundraiser is https://rally.org/Supportcoyoteacabo

You can write to Coyote at the address below: