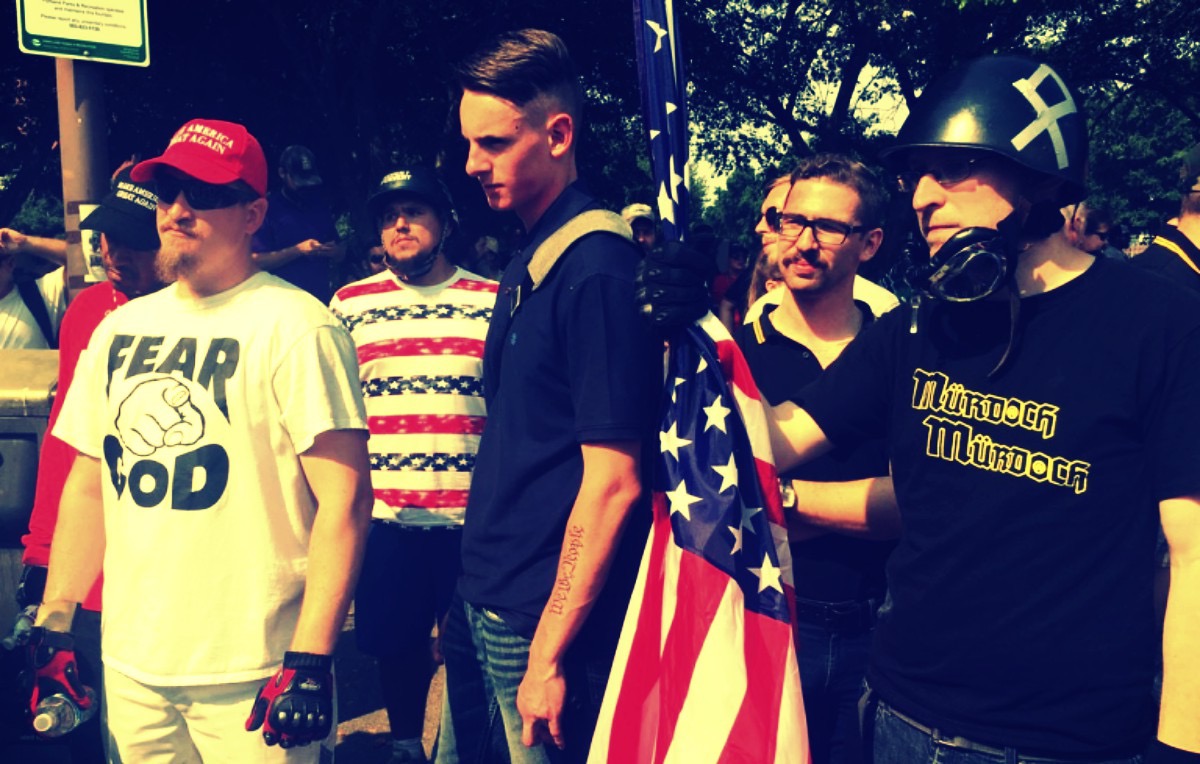 Local alt-right demagogue, Joey Gibson, refuses to stop his organizing activities despite the recent tragedy in Charlottesville. At this stage there can be no doubt that no matter what lip service Gibson pays to being a nice guy full of “love”, his actions demonstrate at best callous disregard, and at worst complete support for the violent impact of his rallies and those like it.

After our numerous articles exposing his white supremacist associates, and the opposition antifa have been consistently giving his hate fests, only a small circle of die hard bigots and zealots remain. We must keep up the pressure to stop them once and for all. This type of fascist aggitation in the current powder keg atmosphere in the US can only mean egregious harm to the most vulnerable people in our communities.

The Unite the Right event held in Charlottesville, which culminated in the cold-blooded murder of Heather Heyer, featured speakers Gibson has invited here to Portland. There are numerous parallels between the the events Gibson orchestrates and Unite the Right. The demographic attracted, the talking points used, and the political goals are in step with this larger pattern of rallies across the nation which have transformed from the lightly coded “free speech” and “pro-Trump” messaging to seig-heiling, torch-bearing spectacles of fascist intimidation.

The effect of such events has been radicalizing members of the right, increasing the organizing potential of overtly fascist and white supremacist groups and individuals, and providing an emotionally charged atmosphere which spurns fanatics to take their murderous fantasies from the web out into the real world.

This was true here in Portland, where Jeremy Christian attended a Patriot Prayer event then stabbed three people– murdering two of them–on a max train. While Gibson and his ilk have tried to distance themselves from this disgusting act, the fact remains Christian went from internet warrior to murderer after going to that rally.

There has not been a single Patriot Prayer rally in the Portland area which has not featured the presence and recruitment activities of overt fascists, white supremacists, and neo-nazis. The correlation between Joey Gibson’s rallies and increased incidents of white supremacist harassment, violence, and murder is clear and direct.

Joey Gibson constantly issues cheap verbal declarations that white supremacists are not welcome at his rallies, but refuses to ever take any action that would prevent them from using his rallies as platforms for organizing violence against our communities. Ultimately words do not matter, actions do.

In the wake of the nazi violence and murder in Charlottesville, many in the United States are realizing that the threat presented by fascist alt-right organizing is very real, extremely deadly, and on the rise thanks in no small part to people like Joey Gibson, who has been facilitating such organizing in the Pacific Northwest for much of 2017.

Join Rose City Antifa as we stand against Joey Gibson’s latest nazi-magnet rally and demand both accountability for, and immediate cessation of the murderous white supremacist organizing he is fostering.

The event organizers would like to make a clear statement on the strategy and tactics of the September 10th event.

We believe that a broad coalition response is necessary to combat this particular extreme right alliance. The composition of this grouping, with explicit white nationalists embedded in a larger sphere of various crypto-fascist and far-right parties, makes this trickier to address than a simple “white power” march. We would like to focus on highlighting the overt white supremacists in attendance. We are committed to the idea that people in our community should be able to participate in resisting this bigotry in whatever capacity they find appropriate.

We are unapologetic about the reality that fighting fascism at points requires physical militancy. Anti-fascism is, by nature, a form of self-defense: the goal of fascism is to exterminate the vast majority of human beings. However, we realize that not everyone is able to do that type of work for a wide variety of reasons. We cannot emphasize enough that a diverse range of other forms of resistance are also crucial. There are groups in attendance that will be prepared to handle physical opposition, and all those compelled are welcome to join in that effort. We want to be clear that we are by no means expecting the entire rally to want, or be able, to do that. We ask that all rally attendees respect the boundaries and safety of one another.

While we are not opposed to the tactic of property destruction, we would encourage other individuals and groups to seriously consider the strategic value of their chosen actions at this event. The climate in Portland and across the country right now is such that extremely heavy charges are being handed out for acts of vandalism that have little impact beyond the symbolic. We are by no means against people risking arrest in order to fight for justice, but as witnessed at May Day 2017, the Portland Police and District Attorney are more eager than ever to hand out these charges, and to enact violence against members of our community. While sometimes it is unavoidable to confront the state in order to achieve important goals, these decisions should be carefully thought out in terms of costs and benefits.

Putting ourselves at risk for mass arrests for very little tangible victory is not a sustainable model. It places an enormous burden on support networks to provide finances and labor. And in a world where doxxing is a primary weapon of our opponents, arrests can be hugely taxing long term even if charges are beaten. Be aware that these events are heavily surveilled. Covering one’s face and disguising one’s clothing is an effective step to avoiding state repression.

Our message is “No Nazis in our city!” and we want to see tactics that align with that. Again, we ask that attendees respect a diversity of tactics.

1. Our solidarity will be based on respect for diversity of tactics and plans of other groups. As individuals and groups we are committed to treating each other as allies in the struggle.

2. The actions and tactics used will be organized to maintain a separation of time or space to protect the autonomy and safety of the movement.

3. We realize that our detractors will work to divide us by inflaming and magnifying our tactical, strategic, personal and political disagreements. Therefore, any debates or criticisms must stay inside the movement to avoid any public or media denunciations of fellow activists or events.

4. We oppose any state repression of dissent, including surveillance, infiltration, disruption and violence. We agree not to assist law enforcement actions against activists and others.

We hope to see you with us at the rally on Sunday, September 10th!