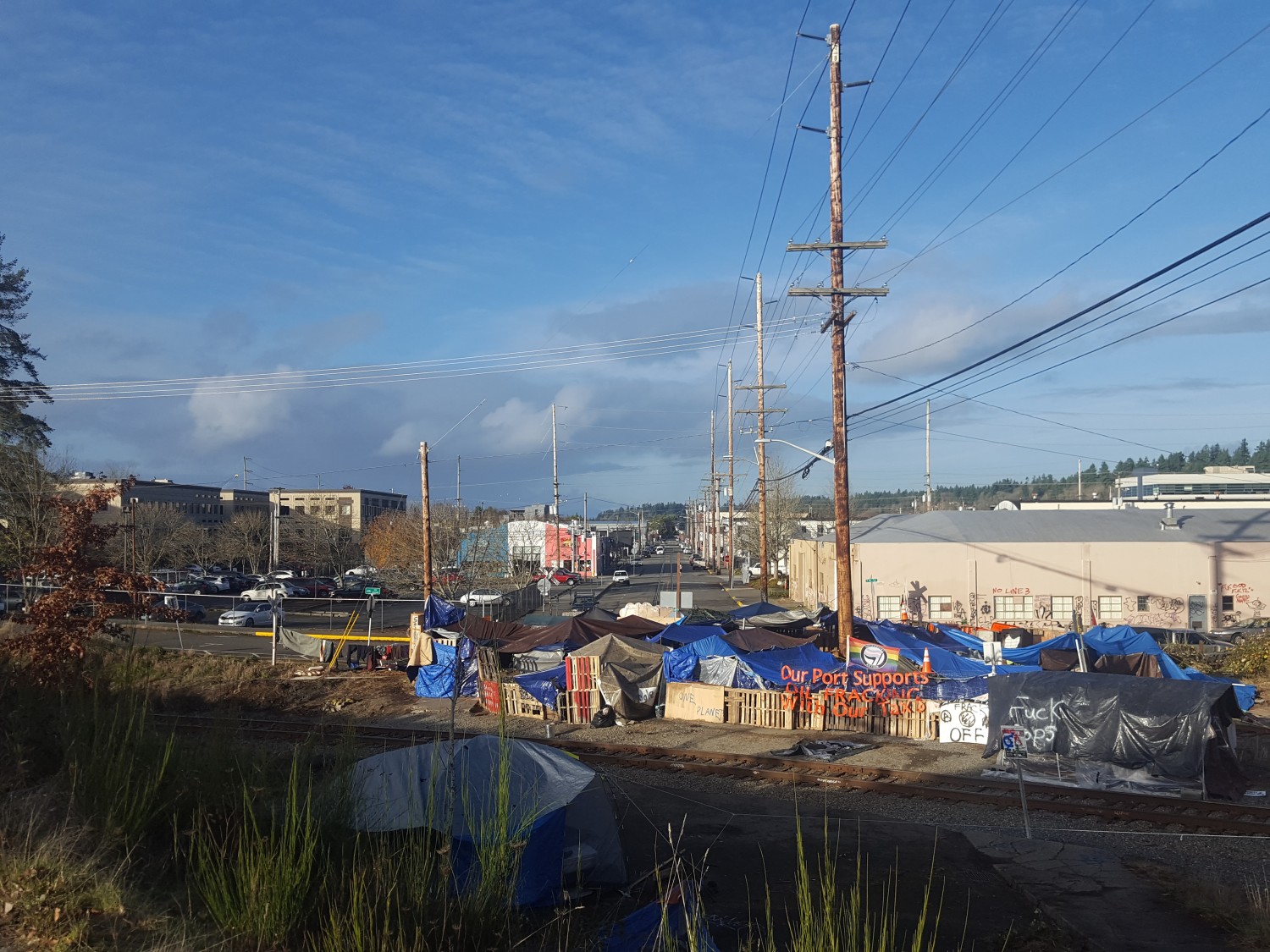 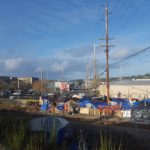 I didn’t see it until 8:30 in the morning, while shirking my duties and privileges as a college student to pay attention in class. Dark, blurry videos and photos populated Oly Stand’s Twitter, posted only a couple of hours ago. “#olympiablockade against #fracking raided this morning!” tweeted Demand Utopia. “There are over 50 cops from multiple jurisdictions and armored vehicles. There is a work crew and about 4 heavy pieces of equipment (backhoes, bulldozer/bobcat, cranes). In addition to aircraft that is circling the #OlympiaBlockade” tweeted Olympia Stand, accompanied by more dark photos. Lastly, a simple text tweet: “The #OlympiaBlockade has been raided. More updates soon,” given around 5 in the morning.

I struggled to make out shapes and forms in the dark setting, pictures of black streets illuminated by phone flashes and distant street lights – squinting hard, the outlines of cops in full riot gear became apparent. POLICE is emblazoned on their chests in another photo. A video depicted a large truck being backed into the area; while silenced on the autoplay, an industrial beast growled and grunted. Another tweet by Olympia Stand read, “All the comrades are out of the #OlympiaBlockade. No arrests have been made.” I could only imagine a bunch of punk kids, spray-painting a wall with magic spells, conjuring tricks in tarps to resurrect a giant anti-capitalist hydra, and scrambling to the hills to watch it duke out with the industrial complex’s own monster.

If I had gone to Olympia that morning, all I would’ve seen is a collection of tarps and folks’ personal belongings, spilling out of a Bobcat, hopefully back onto the rail it was trying to “clean up”. I half-wondered out of my anger whether the sunflower seed butter and charcoal I donated was still in the wreckage.

From the high point on Jefferson as it leaves 8th Street, the Blockade truly was a circus with its poles rooted in the gravel, nestled among Scots broom and Himalayan blackberry. Blue and brown tarps haphazardly held together, probably leaking water somewhere somehow, upturned pallets and spray-painted slogans, the statement to no one and everyone in general, “Our Port Supports Fracking with Our Tax$”, and the rainbow variant of the Antifa flag, it culminated in a beautiful visual disaster that lived, respiring with the strong northbound gusts, cardiac rhythms beat out by a kid really going at it on a bass tom. The Blockade had grown since my last time there. A watch tower platform resting on cinderblocks, ceilinged with a tarp, hugged the staircase leading into the south part of the Blockade like a inebriated kid struggling to stand. A small barrel fire stirred nearby, and the two kids monitoring the south huddled over it. One of them was the same kid who radio’d me in the first time I came around. Elsewhere in the camp, a tarp structure labeled as a free skool was set up on the south side of the tracks. Scattered on the inside table were a few Crimethinc publications and a sign labelled “quiet zone”, or as-quiet-as-a-kid-banging-on-a-bass-tom-can-get zone. Nearby, a new tented room was set up, straddling ever-present mud puddles in the gravel.

In-and-out kids of all various backgrounds came and went, twenty-somethings, Evergreen kids, transient kids, homeless folk, thirty- to forty-year-olds bearing donations every once in a while… the daytime crew, as I was told, was a lull. The inside of the structure during the day was dormant, with most folk napping without stirring on the couches scattered about in the space. Even the pigs, as I patrolled and south and radio’d in sightings, seemed not half-concerned with the Blockade. When nights came, fairy lights, tea candles, and barrel fires lit up the Blockade, and even more folks from further strains of life came in to hang around the bonfire. Artifacts, namely, a flyer, read out a list of events happening on Saturday afternoon: Decolonizing Language, Radical Herbalism, Climb Training… Punk concerts and film screenings also transpired (and I am still sore that I missed them). On Monday I roasted marshmallows with two others, sucking the chemical combustion right off the makeshift skewer, and that was just as alright too.

The Blockade was truly a circus.

The cacophony of voices at the Blockade denied the Port of Olympia’s desire to classify it into one concise list of demands, one opinion – that’s what makes it beautiful. The desire was obvious when Port commissioners “invited” members of the Blockade to an “advisory” session on Monday night’s meeting as part of a “dialogue”, “in the interest of harmony” in Port Commissioner Downing’s words. He left empty-handed but iron-fisted. A representative of the Tulalip Tribe and the Indigenous Caucus, a land and water protector, demanded that the Port consult indigenous folk in their decision-making. In reference to Standing Rock, she says “We don’t always agree among ourselves, but [indigenous people] gathered at Standing Rock to make a stand… because we feel so strongly about this”.

What follows are some excerpts of commissioners’ responses to “general public opinion. Port Commissioner Zita, the “liberal” of the three commissioners (and honestly the only somewhat pleasant one), placates “I hear a lot of people concerned about the blocked train tracks.” and “We have an opportunity to listen to people, to work with the City, to work with the Olympia Police Department, to work with the public, to try to compromise, communicate, work for a peaceful settlement.” Commissioner Downing: “I believe in global warming and it’s a bad situation and we need to do something about it… so let’s work towards a solution.” Commissioner McGregor: “…it’s unfortunate that other companies in this community that provide well-paying jobs are being impacted by the fact that the trains are sitting… and [the train’s cargo] is production that they need to get into in order to make some of the great things that we buy at the store called Pepsi or Coke or whatever they’re bottling at the time…” It sounds like the woman who announces for Sound Transit Express buses, “Approaching: Apocalypse and Slow-Burning Extinction.”

Some voices of or associated with the Blockade did show up that night. The same representative of the Indigenous Caucus pointed out the Port’s claim that there are only two affinity groups organizing the Blockade. In response: “There are many affinity groups coming together and no one group speaks for the Blockade, the action… It’s a little more complicated [than last year].” She spoke of the threat of fracking to water and communities, of escalating natural disasters, of 1000-men worker camps imperializing upon Native bodies in Canada, of indigenous resistance. Another voice (whom I had trouble with distilling into one unified statement, funnily enough) defended the effectiveness of direct action, since “writing letters doesn’t really get you anywhere.”, proclaimed unity of folk at the Blockade with indigenous resistance, democratic control of Port development amidst “million-dollar townhouses being built on Port land… when we have people out in the cold, things that the community needs.” One voice representing a Libertarian Socialist caucus had a set list of demands they wanted, consultation and consent of indigenous folk, democratic control of the Port, no more fossil fuel transport, a transition to green jobs out of the Port and cooperative economy in Thurston County, shoreline ecological restoration. Even a “Voltairine de Cleyre” spoke at the meeting.

In response, Commissioner McGregor, expressing his frustration with a lack of unity of demands of the Blockade, quoted a recent list of demands, “… I went online and looked at some of the social media out there, and I find something from someone called ‘Us at the Olympia Commune’,” (cue my bright shining eyes), “… ‘We have investigated our desires and come up with some ideas about what we really want the result of this Blockade to be. Number one: Make the Port a beach again. Two: Blow up the sun… the complete destruction of time itself’…” (cue numerous anarchist cackles), “…‘that while science still exists, one of us is, be endowed with…’ and I’m not sure how to say this, ada.. adamaytium-laced skeleton… I mean how serious are [these lists of demands]?”

Most of the voices at the Blockade didn’t show up to the meeting. Most were roasting and toasting by the fire, probably eating dinner, banging on the one bass tom, fucking around on the 6-string-made-five guitar, smoking weed, having “a fun time”, and having “pizzas […] delivered, and turkeys and chickens… they’re gonna have a dance” as Commissioner McGregor said. The circus makes a good theatre without even having to act.

The pictures on Twitter are in daylight now: the pigs in black riot gear and the green armed forces came with their industrial machines and swept away everything material, seizing the belongings of a person across the way who wasn’t even involved in the Blockade. “Militarized Police force of this size needed to break up peaceful water protectors? Is this necessary?” writes Oly Stand on their Twitter page. It was a strategic show of force to impose fear, to counter the almost 2 weeks of momentum the Blockade created; thank Whoever that no one physically was injured or arrested (as of late November 29th).

There was never room for negotiation with the Port. There was never anyone who would listen on the Port’s side to economically inefficient demands. There was also never any one person who could negotiate on the part of the entire Blockade, only a blaring roar that reverberates not in conference rooms, but on colonized, occupied Nisqually and Squaxin land, on spray-painted walls, in musical instruments, through skillshares. The entropy is high with each varied opinion on what would be best for the world, while everyone simultaneously creates that new world every day. Despite the disunity, no one in the Blockade settled on status quo, only settled on the tracks. On my second day out I noticed how beautiful it was, the train tracks, capitalism’s instruments, pointing straight at kids sharing weed, sleeping quietly, eating donated food, talking and chilling, playing music, sharing skills and giving aid where aid is needed – when the Blockade became a Commune, it was all a normal circus. While the Blockade is gone, the Commune remains – the fire smell trailing off my clothes yet is a testament to that.

My favorite piece of art from the Commune (that I hope still lingers) is on the west wall of the building kitty-corner northeast of the blockade. It humbly reads: “delete the port”. Delete every port, indeed.