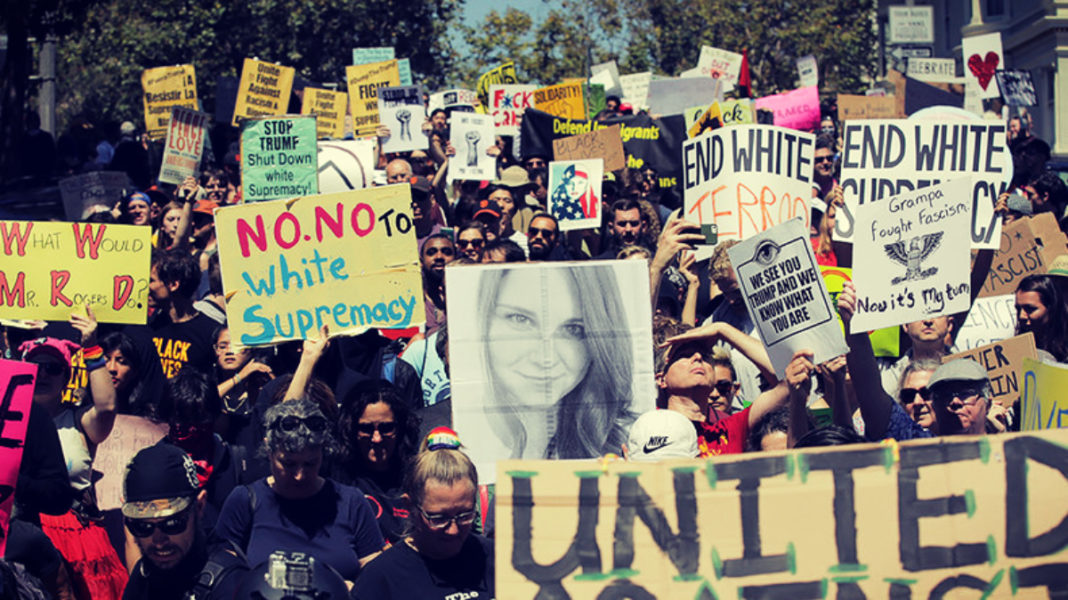 The following is an update about what you need to know regarding the #AllOutPDX mobilization in Portland from Anti-Fascist News. It is followed by a press release from Pop Mob.

On Saturday, August 4th, there will be one of the largest actions against Patriot Prayer, and their acolytes the Proud Boys, in the two years they have been terrorizing the West Coast.  Coming from Washington and areas around Portland, they have been converging on the city to hold far-right rallies with deep anti-immigrant, Islamophobic, homophobic, transphobic, and incredibly violent rallies where they have been attacking leftists.  Patriot Prayer, while using the civic nationalist rhetoric of “independent Trumpism,” have made themselves a vessel for white nationalist groups, including the active support and participation of groups like Identity Evropa, the Traditionalist Workers Pary, Cascadian Legion, Operation Werewolf recruits, as well as members of neo-Nazi skinhead gangs and “Patriot” militia groups like the Oath Keepers and 3%ers.

The last several rallies and marches from Patriot Prayer have increasingly become centered on the Proud Boys, the civic nationalist street gang that is known for its violent attacks.  On June 30th, the Proud Boys brutally attacked counter-protesters, critically hospitalizing community members, and this came after several unprovoked street attacks from various Proud Boys in the weeks before.  This Saturday they will be holding another public rally, centered on founder, and Senate candidate in Washington Joey Gibson.  This event has a vague goal of “freedom” and other buzzwords, but the point is to attack the left.

This action is being countered by a massive coalition.  Pop Mob, which means “popular mobilization,” has organized a mass coalition to march and amass on Patriot Prayer.  Rose City Antifa and other militant organizations will be having a huge direct response to Patriot Prayer, and both projects are coming together in mutual aid to shut down Patriot Prayer.

Here are the critical things that every attendee on Saturday should know.

There will be a rally at City Hall in downtown Portland made up of a number of community groups and labor unions to stand against Patriot Prayer’s hateful rhetoric.  This will include SEIU Local 503, the Western State Center, Portland Jobs With Justice, and others.

Converge on Tom McCall Waterfront Park at the Salmon Street Fountain.  This is where Patriot Prayer will be coming.  This action will be frontlined by militant antifascists, including Rose City Antifa, Eugene Antifa, PNW Antifascist Workers Collective, SHARP, and RASH NW.  This will be backed by Pop Mob, which makes up the large mass of participants.  This coalition has been endorsed by a range of groups, from the one’s listed on the 10:30am rally to other groups like KBOO, Black Rose – Rosa Negra, the Democratic Socialists of America, and many other churches, labor unions, and community groups.  This is one of the largest coalition actions of the year.  This means that there will be spaces for both type of participation, and the “green zone” behind the militants intended to be a space where protesters can be protected to speak their views and support the protest of Patriot Prayer.

People are no longer meeting at Chapman Square, that was a placeholder location until Patriot Prayer revealed their actual location.

Patriot Prayer will have the ability to carry guns, and many promise to be armed.  If they are in Terry Shrunk Plaza, where they often amass, they are banned from bringing in weapons because it is a federal park and their are regulations preventing that.  This is not the case for Waterfront Park, and they have been open about bringing guns.  The announcement of the guns is intended to frighten counter protesters, and in a recent video from Joey Gibson he included a young boy playing with a semi-automatic weapon.

Patriot Prayer is also saying that they are going to be putting upwards of 35 members of their own group, including Proud Boys, dressed in black bloc clothing into the antifascist crowd.  Those people can then attack counter protesters or try to catch them being foolish.  This groups is supposed to be run by Russell Schultz, one of the violent Proud Boys doxxed by Rose City Antifa.  This is likely bluster to create a sense of internal discord, but may be something to watch for.

The far-right side is raising money to bring in Proud Boys from other state, and they had between 60-80 at the June 30th rally.  They could be bringing even more this time, and they will all be coming in at least four busses from Vancouver, across the river in Washington.  Those busses will have armed security on them.  The Proud Boys are the most violent contingent, and will come in body armor specifically to fight.

All Out Against Fascism: Portland Coalition Unites Against Patriot Prayer

POPMOB calls on all of Portland to join the coalition’s “Stop the Hate” rally outside City Hall at 10:30 AM tomorrow. At 11:30 AM, the Portland antifascist community will unite at Tom McCall Waterfront Park to demonstrate against the concurrent Patriot Prayer event and deny them a platform from which they might organize further violence.

Since its beginnings, Patriot Prayer, led by Joey Gibson, has harassed, intimidated, and brutalized the people of Portland and Washington. Members and supporters of Patriot Prayer include affiliates of white supremacist prison gangs and the neo-nazi group Identity Evropa, and a participant in last summer’s “Unite The Right” rally in Charlottesville, VA  which resulted in the murder of antifascist Heather Heyer.

Over the last two years, Portlanders have tried ignoring Patriot Prayer, but their numbers have only grown.  Tomorrow, on August 4th, they will try to march once again in Portland in an attempt to further their white nationalist, far-right agenda. On that day, Portlanders will show Patriot Prayer that they have no place in this city. Those of us who oppose the fascist ideals of Patriot Prayer — their nationalism, sexism, homophobia, and lust for violence — far outnumber those who support them. Those of us who believe in a better world will unite to defend Portland from fascism.

“It is clear that the current system is broken and doesn’t work for a lot of people,” says POPMOB member Effie Baum. “We want a world that meets the needs of all people so that all people can have a full and meaningful life. Patriot Prayer does not want this.”

POPMOB encourages all members of the Portland community to join us in opposing Patriot Prayer and their violent, far-right agenda. Parents, teachers, artists, union members, health care providers, receptionists, food service workers: we are all anti-fascists. We are more powerful together, we are resilient, and we must join on August 4th to show Patriot Prayer that this is our city, not theirs.