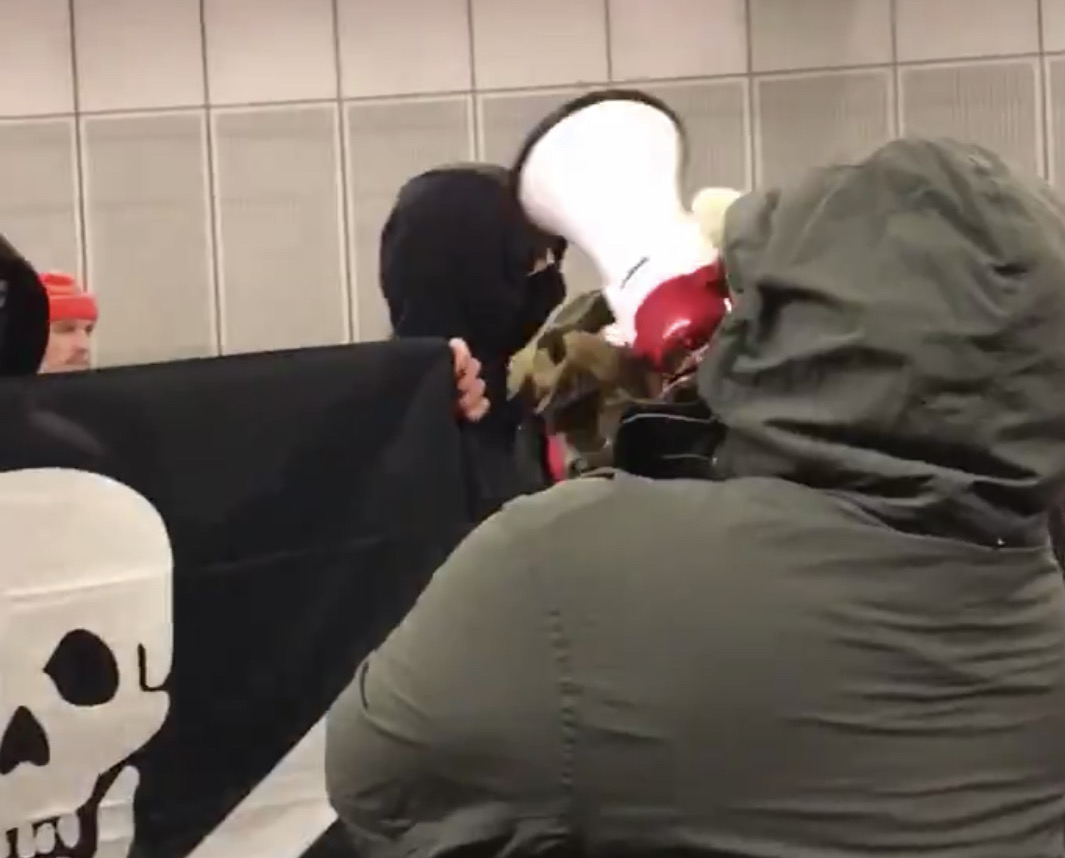 The fare strike emerged for many reasons. It’s away to assert our shared power and take it back from the rich and the state. It’s a way to reveal the ongoing social war. For some it’s a way to protest. For some its a way to build capacity to act directly together.

In pretty  much every instance fare enforcement costs more money than it saves. So what’s the point? Fare enforcement is about policing people deemed “undesirable” this includes houseless people, poor people, non-white, etc. “Black passengers cited, punished disproportionately by Sound Transit fare enforcement.” This comes as no surprise to those who no the history and function of policing.

Fares also make up very very little of what it takes to fund transit. Most of transit is funded by taxes paid by working class people. The poor are also the ones who suffer most from having to pay for fares. For this and many other reasons people chose to strike.

Fare enforcement only exists so long as it is socially viable. If enough people resist the security forces do not have the ability to control the situation. This was proven today.

At  noon we rallied at the Mt Baker Station. It was dead quiet at first. The cold made the quiet seemed uncanny. After a dozen or so of us arrived we promptly took off and boarded the lightrail headed north picking up chants raising our morale. Even if the few sheriffs tried, they couldn’t possibly stop us.

Folks were mainly in bloc, a few people with cameras documented what was happening, and transit riders cheered us on. Folks handed out relevant handbills to those interested, a very effective method of getting something in the hands of those interested. Others scrawled slogans on the walls and windows of the lightrail car.

We realized we probably missed a few additional strikers who showed up a little late. Haste can be important in outpacing control, but numbers can be important and it never feels good to be left behind. I don’t advise kicking oneself for this, but just another lesson we can use to kick even more ass next time.

Chants of “Tax the rich, not the poor!” morphed into “Eat the rich, arm the poor!” and drifted back and forth between those different iterations. “No fare is fair!” echoed through each station as people shouted each times the doors of the car opened at the stops along the way. Eventually we got off the car at the Capitol Hill and rallied in Cal Anderson park. Notably Capitol Hill is place where people are more confident taking conflictual action as it is harder to police than other parts of the city and its terrain is better known to those usually involved.

The strikers took a moment and utilizing an emergent strategy decided to get back on the lightrail and continue the protest and get the word out more about the strike.The stikers hopped back and forth on the cars, chanting and talking to people. Not everyone was supportive. Some naysayers just seemed like they were having a bad one and looking for someone to take it out on. I’d cal this mostly horizontal hostility. There were also upper-class drunk cougars fans that made their hostility clear.

It was after some drunk dude started pushing people then went to talk to the cops. Some folks decided to dip. I went with them. We removed our outer layers of clothing that we had put on before joining the strike to hinder our enemies attempts at identification and blended back into the hipsters mulling about. Someone should submit their own reportback about what happened after. I’m sure it didn’t end there.

On the way back south, to the only areas we can afford to live anymore, we discussed the conflict with reactionaries. We thought better of our choice to leave, but recalled other times reactionaries started shit then gave the cops reason to break shit up. We also noted that we were pretty hot-headed and maybe would’ve needlessly escalated things as has happened before where some bigot mouthing off can lead to someone untactfully macing a whole bunch of people including random onlookers. One comrade noted that bigots still should get maced and fucked up. We all agreed. In each case be a matter of risk assessment and trying to minimize collateral damage. With direct action there is always risk, but that risk is worth it in terms of what autonomous activity can bring us. We discussed how so much activity has been confronting reactionaries recently, but how reactionaries are not often accounted for in terms of other organizing. It’s not just the police that will confront us in the street. Random macho bigots and organized fascists alike will no doubt take issue with anarchist activity. We must consider ways to deal with these encounters so that we can be prepared when they do occur. It is also the case that no strategy survives first contact with reality. This is the importance of emergent strategy. The ability to operate and make choices in face of game-changing information or unforeseen critical encounters.

One perspective pushes the fare strike as a means to draw attention to and push the city to the desirability of a no fare system. Another suggests that we by our evasive actions are creating the no fare system right then and there. Flipping off the cameras which before had us fearing if someone was watching or not. We talked amongst ourselves about our different dodging strategies. Talking with glee about sitting in the back of a car so we have a good view and getting off if we see the fare enforcement officers get on and simply getting on the next train. These are tactics many can employ and also teach lessons.

The police are a force of movement. They do not have enough people or infrastructure to be everywhere. Their actions are also limited by that which they can get away without chaotic repercussion. This Black Friday some of us took heed of their cameras, but acted anyway. We dodged the fare, but we also took from fully stocked shelves and gave to the poor without participating in the debasement of commerce. That is to say we took advantage of Black Friday, muffled the cop inside our head, and stole to our hearts content.

The function of the cameras in stores or on the lightrail is the same; to make you think that someone is watching. Often someone isn’t. Images of playing cards flash in the Beacon Hill lightrail tunnel to remind those evading that they’re taking a risk. The cops function similarly to their cameras. They project force, but also disguise the flows in which power really operates. I say we keep taking these calculated risks, these shots in the dark.