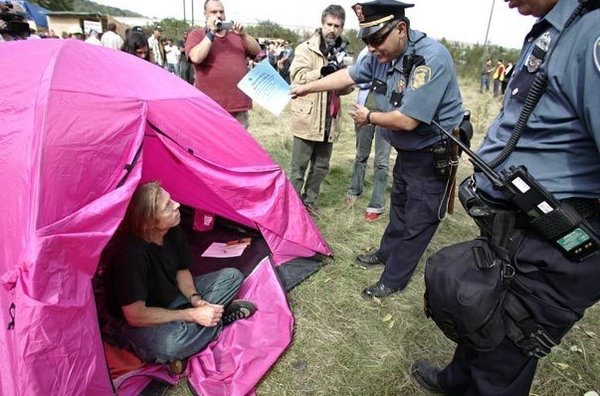 Don’t Let Your Houseless Neighbors Be Treated Like Garbage

Thousands of people sleep-rough in tents, doorways, or vehicles around the Puget Sound. On any given day they might be forced to give up what little semblance of stability they have by threat of violent arrest and seizure of their few belongings. These sweeps are a never-ending game of whack-a-mole where the only result is to keep the problem out of sight and out of mind, all while inflicting ever-more violence and trauma on those already suffering.

As an avalanche of tech capital pours into the region, more are forced out of their homes and onto the streets every day. This displacement often falls along historic lines of racist and colonial segregation: Indigenous, Black and Brown communities are significantly more likely to be forced out by gentrification and find themselves with nowhere else to go. A nationwide drug epidemic, fueled by massively profitable pharmaceutical companies, magnifies the problems homeless folks already face.

Private charity and city spending enables those with power and money to insist they are “doing something” when in reality they are a pitiful band-aid on a gaping wound. Despite an endless stream of lies from City Halls, there are never enough housing or treatment options or even shelter beds to meet the constantly growing need.

Solving this problem will take the compassionate efforts of all of us. We must build new lines of solidarity and mutual-aid in order to leave this dystopia behind and build a new world.

A War on Homeless People

A diffuse network of agencies, corporations, and “concerned citizens” dehumanize and brutalize homeless folks, occasionally professing to care about their well being while in reality subjecting our neighbors to a never-ending cycle of humiliation. This also serves as a warning to keep the rest of us compliant and unquestioning, thankful for what few comforts we might cling to.

Conservative and corporate media outlets have found attacks on homeless people to be a profitable platform. Personalities like KIRO Radio’s Jason Rantz and TV networks like KOMO, with their “Seattle is Dying” documentary, peddle a false narrative which paints homeless folks as morally bankrupt addicts. Their deep capitalist interest in maintaining the status-quo incentives them to deliberately ignore the systemic issues that created this reality.

The face of Seattle’s government outreach is the “Navigation Team” of Seattle Police officers and social workers. The latter have expressed that they are used as a prop by the cops to claim they are “offering services” that do not actually exist. The officer’s personal sentiments are encapsulated by their union, the Seattle Police Officers Guild, which invited hate group Safe Seattle to a recent candidate forum because of their shared false belief that more aggressive policing will solve the problem. The Nav Team model has recently been exported to Olympia, Bellingham, and elsewhere. The former head left after being exposed insisting a sweep continue even after a resident was found dead; he was promptly hired by Vancouver to start a similar program.

Private individuals, occasionally funded by corporate and conservative money, have made Facebook groups and pages a central organizing platform for a grassroots assault on homeless folks. These groups often cultivate concrete ties with recognized hate groups such as “Patriot Prayer” and “Three Percenter” militias.

Some, such as “Safe Seattle,” spread outright lies and overt calls for vigilante violence against people on the streets. Others, like “Seattle Looks like Shit,” spread sensational imagery in order to dehumanize homeless people while contributing nothing towards a solution. Increasingly these groups exist for communities beyond Seattle’s city limits, such as “Burien Voice” and “East Pierce Watch.”

What can You do? Solidarity and Mutual-Aid!

Maintaining dehumanized groups of people like homeless folks is a central pillar of support maintaining Capitalism. Until we bring about total systemic change the problem will continue. The path to this change begins with organizing by and alongside those most profoundly impacted by it. On the smallest scale, individuals and small groups among those of us who are housed can provide concrete support on the understanding that our own liberation is tied together. Get together with friends or neighbors to provide an ongoing, concrete resource like a weekly meal for your homeless neighbors. Organize in your workplace or community group to provide free places to seek shelter during the day or night. Overcome your apprehensions and make friends with nearby encampments to find out, from their perspective, what assistance you can offer them. Showing up at a camp and telling someone that you are a neighbor who wants to help will be a welcome change from most interactions people have. Join or build networks working to Stop the Sweeps, end incarceration, or dismantle the racist, capitalist system that underpins this entire “crisis.”