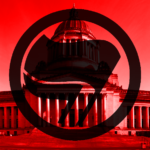 Anarchists in Olympia call on all anti-racists and anti-fascists to stand together against white supremacy on Saturday, December 7th at noon at the state capitol.

Jason “Gravy” DiSimis is the owner of Tac Town Tattoo and affiliated with Crew 38 of the Northwest Hammerskins. Nationally, Hammerskins have taken responsibility for firebombing a person of color-owned nightclub, a racially-motivated murder of a Black man in Texas, vandalizing synagogues, and numerous other racist attacks on Black, Jewish, and Latino people and communities. Almost exactly a year ago, Hammerskins ruthlessly beat a Black man at a Lynnwood bar.  Jason DiSimis has called for a rally at the Washington State capitol building this Saturday, and we must show that together we are stronger than white supremacy.

This weekend coincides with Martyr’s Day, when every year white supremacists memorialize Robert Jay Mathews , a leader of the white supremacist organization The Order/ Brüder Schweigen who died in a siege and firefight with federal authorities at Whidbey Island, Washington on December 8, 1984. Neo-Nazis often travel to Whidbey Island to pay tribute to Mathews–a photo from 2014 shows over thirty Hammerskins and allies posing on the Island. It is possible there will be numerous Nazis in the region for Martyr’s Day, although the Hammerskins’ announced plans to march on Capitol Hill in Seattle for 2015 Martyr’s Day turned out to be an empty threat.

Nonetheless, it is important to confront violent white supremacy whenever it threatens to rear its head. In 2015, nearly 500 anti-racists came together for a rally against white supremacy in Seattle. The Nazis were a no-show, and the community was able to demonstrate its collective strength and care.

Please join us this Saturday, December 7th at noon at the Washington State capitol for a day of joyful resistance to bigotry, nationalist violence, and white supremacy. Bring banners, signs, noisemakers, and your friends.