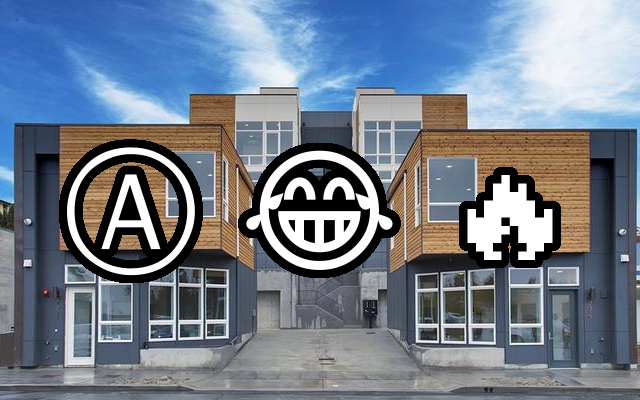 Whose street?
No street!
Tear up the concrete!

Earlier this month I noticed a flier, appearing in store windows that with a red background and white text declared, “SAVE 35th AVE” complaining about the purposed loss of some street parking due in a new infrastructure development project that planned to make this aforementioned Ave safer and more accessible. I spend a lot of time walking around in this particular neighborhood in the greater Seattle area so I can observe trends in street outreach pretty easily. A few days went by, maybe even a week, and then I noticed a new flier; I noticed a flier with a green background and white text with a playful retort, “SAFE 35th AVE” that championed the new developement plan as a move towards a safer and more accessible 35th Ave. These two campaigns continued to escalate with rallies and the like. The playful greens escalating the most with biking campaigns, accident statistics posted at intersections, and even paint and sticker campaigns.

I was enjoying watching the escalations and moves and counter moves each day as I went about my day, but then one day all the fliers were torn up and the public space seemed empty and less colorful. The red signs remained behind their glass in storefronts, but only tatters of the green posters remained. 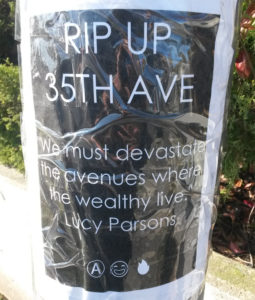 Then after talking to some friends about it, we had a great idea. Let’s start our own playful poster campaign! And thus “RIP UP 35th AVE” was born. With a black background and white text, anarchist and neo-luddite messages and jokey plays on the statist assumption that anarchy means no one will be able to construct roads are going up all over 35th filling the once dull public space.

With the revival of the SUV we also took shots at cars in general and liberal hybrid, Tesla, and SUV drivers who feel superior to people driving old scrappy trucks when the liberal hybrid, Tesla, and SUV driver’s are clearly the worse polluters. We traced the dots between oil Dependant lifestyles to wars for oil and terrorist blowblack as well as to the obvious ecocide. Though we also tried to make it clear that it is the ruling class who mainly produces these lifeways and not necessarily the consumers who are mostly at fault. With some Portland anarchists filling up pot-holes we felt it fair to revive the green anarchist tradition of attacking roads themsleves, along with railways and shipping routes, since they are like the veins of capitalism and techno-industrial civilization.

With this we also hope to inspire others to turn “public space” into a canvas for expression, play, and engagement. Though here we will warn against allowing yourself to be mapped or read by the authorities.

We’ve done this in part to make “public space” into “common space” where, instead of the state owning the bureaucratically regulated space, the space is held in common.

If you think we’re regressive fools or still too infected with leftism, perhaps you can start your own “35th” campaign. “Communize 35th Ave” or “Liberate 35th Ave” or “Upload 35th Ave” may be a start, we found it enjoyable to play into our perceived faults for comedic affect, but you may want to take a more straight-faced approach.

“We must devastate the avenues where the wealthy live.” – Lucy Parsons

For joyous attacks on the logistics of the ruling order and commoning of public space.

We sign this communique as we signed our fliers,
Ⓐ 😂 🔥