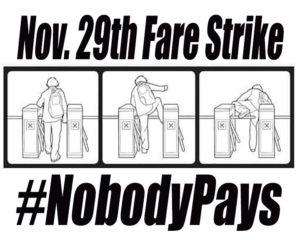 A strike is both the halting of an action as well as the application of force.

The squeeze is happening everywhere. We can’t afford the rent, the food, the drinks or even to get back and forth to work. The buses don’t run because they move people who the state considers disposable. The trains are policed by a security-corporation that disproportionately
targets black and brown people, and those without a roof over their head. Because that’s what capitalism does. And that’s what’s killing us.

Things like a gas tax in France, an extradition bill in Hong Kong or a fare hike in Chile are flash points but not the entire story. The rest of it is that the people in those places are done with the social order that keeps them impoverished, hungry and denies them basic dignity. This is well understood by the students in Chile and their words and actions have reflected this. Those of us watching events unfold in Ecuador and Haiti and seeing the same thing, that people are literally dying to be free.

November 29th is just a day, one picked almost at random, but it could be the locus of our force. The day where we all choose refusal and action. On that day, refuse to pay your fare, refuse to let others be hassled for theirs, refuse to allow your own degradation and the poverty of those around you to continue without consequence.

November 29th is a day to explore what a strike can be. Is it simply sneaking on the train? Is it blocking a Microsoft Connector bus as it rolls tech workers through the Central District? Is it standing up to security when they harass another fare dodger? Is is sabotaging those god damned tapper machines? Simply refuse to pay, refuse to comply, help others to do the same. Don’t wait, this day will be the culmination of our energy, our affinities and our friendships. The right to live is something that some people are comfortable asking for; consider this an insistence to fucking take it.

Those signal fires are lit, and we are in the midst of global uprisings against the last few decades of neo-liberal policies; of astronomically rising rents and an environmental catastrophe that will literally consume us all. Across the world rebellions against the sheer costs of living and the dogged fight to survive have been re-forming. And we want to be a part of it, we want to feel what a world free of domination could feel like, and we want to fight alongside those willing to try and get there.

To everyone who remembers trying to turn off that christmas tree 4 years ago, let’s make black friday a total fucking mess again.
#nobodypays
#evade

“We believe it’s necessary to confront the apparatus of the police state, without illusions, and take up the position of the fallen without lowering our arms, confronting the attacks of the state from all possible positions.”-Grupo Solenopsis
October 2019 Santiago, Región chilena