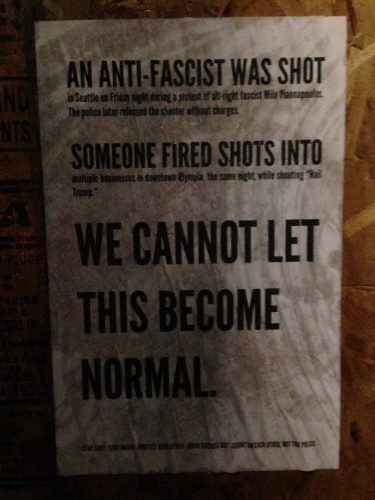 Feeling inspired after a very well attended talk on anti-fascism in downtown
Olympia, a group of anarchists got together to wheat paste anti-fascist and
anarchist posters around town. We took this small action to spread our
message against fascism, and also to show that we still hold public space
despite intimidation from fascists. The alt-reich desperately wishes to push
us out of public space and discourse and inhabit it themselves to spread
their reactionary agenda. Olympia is and must remain an ANTIFA zone, as
demonstrated in May 2015 when a small group of nazis had their heads and
trucks bashed in a moment of militant collective self defense that made our
town feel more like a community than many of us have ever felt.

We insist that fascism and the Trump regime it defends is not an issue of
ignorance – many Trump voters were college educated – and that
anti-fascism is not a matter of education. Those who insist on “fact
checking” fake news and so-called alternative facts mistake statements of
intention from the right as statements of truth. Power makes truth, not vice
versa, to assert our truth we must attack their power, which means stopping
Nazis and the Trump regime where-ever they seek a public audience.

We wheat pasted fliers that drew attention to the shooting of an antifascist comrade
in Seattle and to the drive by shooting out of windows in downtown Olympia by a man
yelling “hail trump.” The media has deliberately under-reported and spread
misinformation about these events, so instead of hoping that they will do better
reporting we tried to communicate more directly with people in downtown Olympia
to explain what has happened and emphasize that it is not ok and as one of our
fliers pasted to the boarded up windows of Our Table (One of the businesses
attacked by fascists on J20) read “We cannot let this become normal.” We also
put up fliers praising anti-racist solidarity and celebrating the now legendary punching
of alt-reich founder Richard Spencer.

We remain committed to stopping fascists where-ever they show their faces.
The tactics we utilize are not based on what the right is capable of doing at
this phase of their rise, but what they intend to do. We take them seriously
in their intentions and respond accordingly. We don’t need a reminder of
what happened the last time fascism went unchecked during its incubating
phase. As Adolph Hitler himself confirms, “Only one thing could have
stopped our movement if our adversaries had understood its principle and
from the first day smashed with the utmost brutality the nucleus of our new
movement.”

We also recognize that the struggle against fascism cannot be fought outside
of a struggle against capital, the state, and all forms of oppression, from
which fascism rises like a promise when capitalist liberal democracy
inevitably fails.
Fuck Nazis
-Some Olympia Anarchists