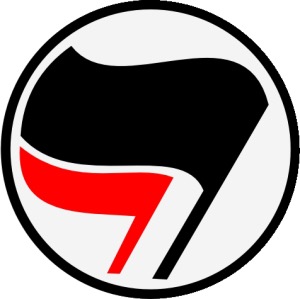 A year after Patriot Prayer, and it’s leader Joey Gibson, brought in white-nationalist and neo-Nazi speakers for an Alt-Right rally they returned with another rally labeled as a “Free Speech” event.  This came one year after the action they held in the same location on June 4th, 2017, where almost four thousand people came out to oppose them. This charade quickly became clear when they showed up with the white-nationalist and misogynist hate-group Proud Boys and attacked journalists, one incident involving a Portland Mercury reporter being shoved and then questioned who she was reporting for.

Anti-fascist groups Rose City Antifa, Eugene Antifa, Rash NW, Pacific Northwest Anti-Fascist Workers Collective, and others organized to shut down this rally and prevent white-supremacists and those that give them a cover to organize under from marching in the streets and instilling fear in the at-risk communities that they target.

Police struggled to keep Patriot Prayer’s numbers protected which lead to panic and anger from their crowd. After several attempts by Patriot Prayer to march, all of which were prevented by the large coalition of anti-racist activists, Patriot Prayer returned back to Terry Shrunk Plaza and called it a day.

Several core members of Patriot Prayer, along with Tusitala “Tiny” Toese, who has been arrested for fighting at past events, were chased throughout the streets of Portland and finally found police protection at the Portland Waterfront. The numbers of the crowd opposed to Patriot Prayer and the Proud Boys had swelled from random onlookers who only had to hear who was being chased to join in on defending their town from hate.

Rose City Antifa has continued a series of articles outlining exactly who these Proud Boys are and a call to hold them publicly responsible.