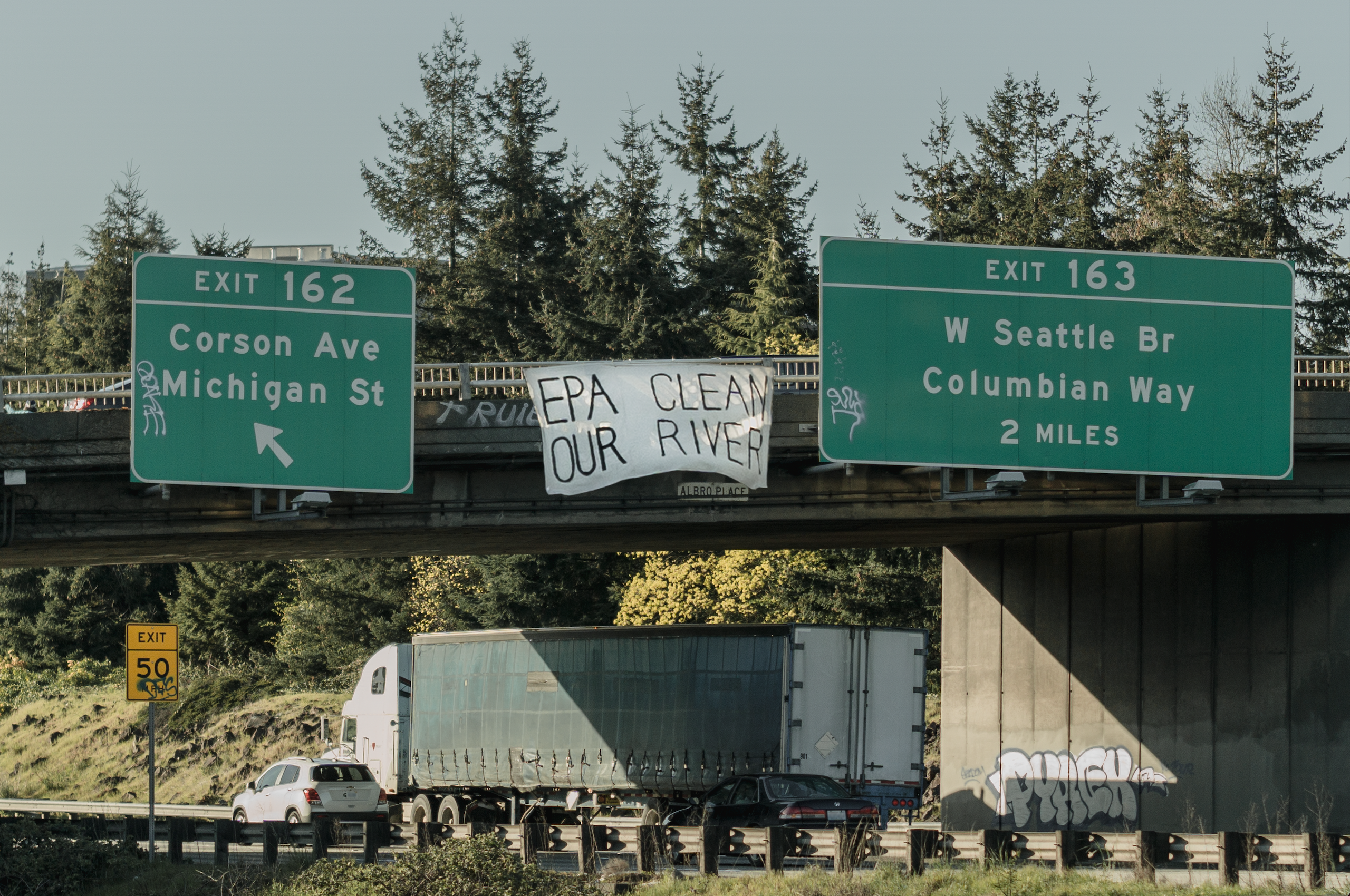 The Duwamish River Valley was one of the largest estuaries in the US which sustained the indigenous peoples and wildlife for thousands of years before immigrant farmers and working class people settled in the valley in the 1850s. The diverse communities of Georgetown and South Park sprung up along the banks of the river and these communities predate displacement by industry, and they still exist.

Dating back to the time of colonization, the Duwamish River has been a site of exploitation. The first Boeing plant was built on the Duwamish River in 1916. The river has been reconfigured and used as a site by industry (Boeing and others) for dumping toxic waste. As a result, the river is brimming with toxins that cause significant health problems including cancer and ongoing ecological damage to the native wildlife.

The EPA has the power to force the polluters with the resources to clean the contaminants in the Duwamish River. The EPA had ruled that 5 miles of the river needed to be cleaned in their 2014 record of decision. The overall cost of the Duwamish River clean up is estimated at $342 million. However, the EPA, using outdated science and with pressure from the polluters relaxed their ruling in 2017 to allow for the cleaning of 5 acres less saving them $1 million. We are currently in a comment period on this change and the EPA is not listening to the people of the community who want the original 2014 decision to be honored. The EPA has contracted technical advisory and community engagement to the Duwamish River Cleanup Coalition (DRCC) who has silenced the voices of the community and made the entire process inaccessible.

Recently, a roundtable was held by the EPA to hear from the people of the community but they would not allow community members to voice their concerns because they did not receive grant funding to pay community members for their time to participate in the caucus. The community members who showed up to the Zoom meeting were barred from speaking. All along the way the EPA and DRCC have placed other insurmountable barriers to keep working, poor, disabled, elderly, immigrant, and non-English speaking neighbors from accessing these meetings and participating in the process. The EPA and DRCC are checking off the box for “community outreach” but have ultimately given the community a big “fuck you”, especially to everyone invested in the outcome. This is not surprising given the nature of liberal representative government and the non-profit-industrial-complex.

This has given the people of the Duwamish Valley no choice but to put a call out to our comrades in the community to take autonomous action against the EPA, DRCC, and polluters of the Duwamish River. This could look like blocking traffic into the city of Seattle or Boeing (the main polluter), banner drops, and other disruption and sabotage. The EPA’s building address is 1200 6th Ave #155, Seattle, WA 98101. The acting administrator for Region 10 is Michelle Pirzadeh, if she refuses to hear us let’s make her listen.

The community groups of this region must also make this a priority. If your group does a land acknowledgement this should also include a statement of solidarity and taking actions to have the backs of the indigenous, working class, and impoverished people of the Duwamish Valley who are fighting to get the river cleaned.

Cecile Hansen, the Chairwoman of the The Duwamish Tribe, sent this comment to the EPA on behalf of the Tribal Council Members:

“Thank you for the opportunity to review and comment. Based on the information provided and our understanding of the proposed changes to the cleanup, we are in strong opposition to the proposal. We do not support increasing the acceptable parts per billion in dry weight of a single contaminant in the river sediment, nor do we consent to decreasing the cleanup area by 5 kilometers. The entire river is sacred and of utmost importance to the Duwamish Tribe, and it is shameful that the EPA would attempt to further shirk its duties even more than in the 2014 agreement for the cleanup.The entirety of the Duwamish River needs a level of care and remediation that will ruffle the feathers of industry, but that is a small price to pay for the survival of salmon, orcas and clean air and water for people.Additionally, your outreach to our tribe and all other communities of the Duwamish Valley has been atrocious or even non-existent. You must extend the comment period, translate your proposal into different languages, and provide assistance to people without a scientific background so that every single person in the valley and surrounding watersheds understands what you are saying. Sending documents to a small number of non-profits and city agencies clearly reaches a tiny fraction of the people most impacted by the pollutants in the river. If you claim to have consulted with our tribe or other communities after this process, you would be dishonest to do so.“

Finally, the pollution perpetrators have been let off easy and largely removed from the conversation. The Boeing corporation is a publicly-funded corporation (through billion-dollar tax breaks) whose impacts on our community cannot be overstated. They perpetuate and profit off of the military-industrial-complex while producing products that directly contribute to climate change. They have not fully taken responsibility or made reparations for their devastating local ecological destruction and they must be held accountable by any means necessary.

It is not possible return the Duwamish River to its pre-colonization condition. However, the industry operating on the banks of the river are doing so on unceded Duwamish land. The EPA may currently have jurisdiction over the cleanup but the decision ultimately rests on the Duwamish Tribe and the people living along the river who are most affected by the pollution and who have stated that they want the full 5 miles of the river cleaned.