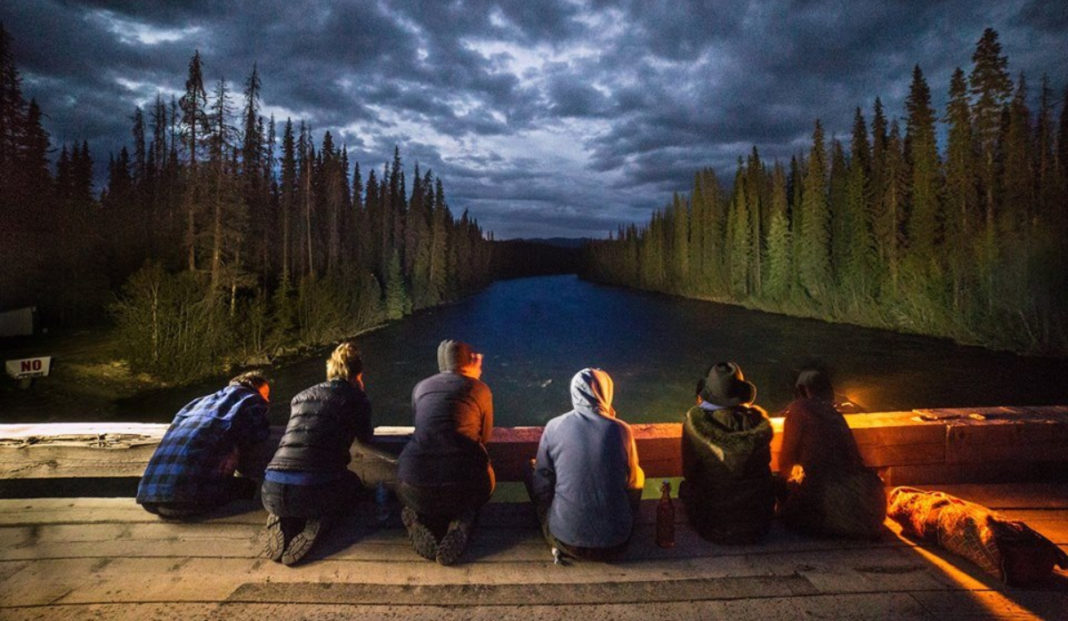 At this very moment a standoff is unfolding, the outcome of which will determine the future of Northern BC for generations to come. Will the entire region be overtaken by the fracking industry, or will Indigenous people asserting their sovereignty be successful in repelling the assault on their homelands? The future is unwritten. What comes next will be greatly influenced by actions taken in the coming days and weeks.

This is a long-term struggle, but it is at a critical moment. That is why we say: The Time is Now. If you are a person of conscience and you understand the magnitude of what is at stake, ask yourself how you might best support the grassroots Wet’suwet’en. For different people, this may mean different things. For some people, it means traveling to the front-lines. For others, awareness-raising efforts or cash/material contributions.

The Unist’ot’en Camp has existed since 2009, and has been continuously occupied since 2012. It was built directly in the way of a proposed pipeline corridor that included multiple mega-projects, including the previously proposed Northern Gateway and the Pacific Trails Pipeline. The Unist’ot’en, known as the People of the Headwater, are a family group within one of five clans of the Wet’suwet’en Nation. Their territories encompass a wide swath of Northern British Columbia. In 2005, a number of large oil and gas companies announced plans to build a massive pipeline corridor through these lands, some Wet’suwet’en people made it their mission to ensure that the future envisioned by these capitalists would never come to pass. Of the five Wet’suwet’en clans, the Unist’ot’en were the first to officially declare themselves opposed to ALL pipelines being proposed to cross their territories. Today, all five clans stand united in this opposition. This unity was achieved through years of consistent diplomacy and consensus-building on the part of the grassroots Wet’suwet’en. The success of their resistance is attributable, in large part, to a steadfast commitment to the traditional Wet’suwet’en governance structure.

In 2009, a cabin was constructed on the exact GPS coordinates of the proposed path of the proposed energy corridor. Because of the geography of the region, which is rugged, mountainous, and seismically active, rerouting the corridor has never been proposed. The site is situated in the Unist’ot’en territory known as Talbits Kwa, whose boundary follows the bank of the Wedzin Kwa (known colonially as the Morice River). A single-lane bridge is the only way in and out of the territory, and can only be accessed by a logging road running south from Houston, BC. For years, the Unist’ot’en Camp has been maintaining a checkpoint on this bridge. The camp leadership is clear that this not a blockade, as they will grant access to various parties, including logging companies, fishers and hunters, provided that they follow the Free, Prior and Informed Consent protocol.

What is the Coastal GasLink pipeline? The Wet’suwet’en people, under the governance of their hereditary chiefs, are standing in the way of the largest fracking project in Canadian history. The Coastal Gas Link pipeline (CGL) aims to connect the fracking operations of Northeastern B.C. with a Liquefied Natural Gas (LNG) facility in the coastal town of Kitimat. This export terminal, called LNG Canada, is owned by a consortium of multinational oil giants (Shell, PetroChina, Petronas, KOGAS, and Mitsubishi).

Although there are propaganda attempts to lead citizens to believe that this 41 billion dollar investment is inevitable; the global market for LNG is unstable, as there are several countries currently established in this extremely competitive market. CGL is the first of many proposed pipelines attempting to cut across the Wet’suwet’en traditional territories. If built, it would expedite the construction of subsequent bitumen and fracked gas pipelines, and create incentive for gas companies to tap into shale deposits along the pipeline right of way. This project aims to blaze a trail, in what has been envisioned as an “energy corridor” through some of the only pristine areas left in this entire region. If CGL were to be built and become operational, it would irreversibly transform the ecology and character of Northern B.C.

The Gitimt’en Camp is clear that this not a blockade, as they will grant access to various parties, including logging companies, fishers and hunters, provided that they follow the Free, Prior and Informed Consent protocol. On Friday, December 21st, a judge granted CGL an extension to their injunction against the Unist’ot’en Camp, applying it to all resistance camps South of Houston. For this reason, the Gitimt’en Camp is on high alert, prepared to defend their unceded territory from the threat of police invasion.

Currently, the front-line is being held by a number of Wet’suwet’en chiefs, families, and experienced front-line activists, and the camp is growing by the day. It is a remote and outdoor camp, inhabited in subzero temperatures. Of course, there are costs associated with this. Surviving, let alone organizing, in a remote area in the Northern winter is difficult. Infrastructure at camp will greatly contribute to the ability to organize effectively. Ways to Support With an injunction in place, police action could come at any time. Local intelligence suggests threat escalation in early January. Wet’suwet’en leaders are asking supporters to treat this situation as urgent.

Come Support on the Front Lines:

– Sponsor a member of your community to come support on the front lines (giving Indigenous folks priority).

– Plan a work party. Get a group of friends together and come to camp with a project in mind, such as building a structure. This option is ideal for people who want to support but who can’t be away from home for long periods of time. Examples of building projects that would be appreciated are: a yurt, a prospector tent, a woodshed, a watch house. Keep in mind that all structures will need to be heated, so wood stoves are in high demand.

– Create a pamphlet (about fracking, LNG, the Coastal GasLink pipeline, the Unist’ot’en and Gidimt’en resistance camps, etc) that could used to spread information in person. If a ready-to-print PDF file is posted online, it can be easily reproduced by people far and wide. Have your pamphlet approved through [email protected]

– Translate existing texts about the camp into other languages.

– Plan a solidarity action. If police and industry move in, it is time to block highways, bridges, and rail lines. It is time to occupy offices, be disruptive, and send a strong message that cannot be ignored. Start thinking about appropriate actions you can take close to home. Bear in mind that using secondary and tertiary targeting (i.e. targeting the business partners of the company you are protesting) is sometimes more effective than appealing to politicians.

– If you a part of an organization, such as an NGO or union, advocate that your organization issue a public statement of support for the Wet’suwet’en Hereditary Chiefs.

– If you are a public figure, please use your influence to raise the profile of the issue. For example, if you have a large social media following, post in support.

– If you are part of an organization that deploys human rights observers to conflict areas, please immediately contact [email protected].

– Signal boost by using social media to share media links and hashtags. The 3 official hashtags of the Yintah Access Checkpoint are #notrespass, #wedzinkwa, and #wetsuwetenstrong.

Ways to Donate to the Wet’suwet’en Access Point on Gidimt’en Territory:

– If you are fundraising, consider setting a goal of a particular item – for example, a camper, a snowmobile, a chainsaw, a generator, or a welder. Having a tangible goal can help make fundraising feel more rewarding.

Note: Gidimt’en Camp and the Unist’ot’en Camp support one another. It is important to note, however, that the two are separate and distinct camps. The two camps are located on the territories of two different clans, and answer to their respective chiefs. This is important for legal reasons. The injunction fails to differentiate between the two camps, but this is not accurate or defensible. The finances of the two camps are separate. If you want to donate to the Unist’ot’en Camp, which is encouraged, please donate to them directly. You can do this via their website at unistotencamp.com

*As life on the front lines can be very difficult physically, emotionally, and mentally, not everyone is encouraged to come. Ask yourself questions like: “In an intense, high-stress situation, am I able to think rationally and act intelligently? Am I prepared for the risk of arrest? Do I bring useful skills? Is the Front-Line the place where I can be the most useful? Is there an Indigenous person that could attend in my place?” Anyone wishing to come should contact [email protected] in advance. Visit the camp’s Facebook page by searching Wet’suwet’en Access point on Gidimt’en territory.