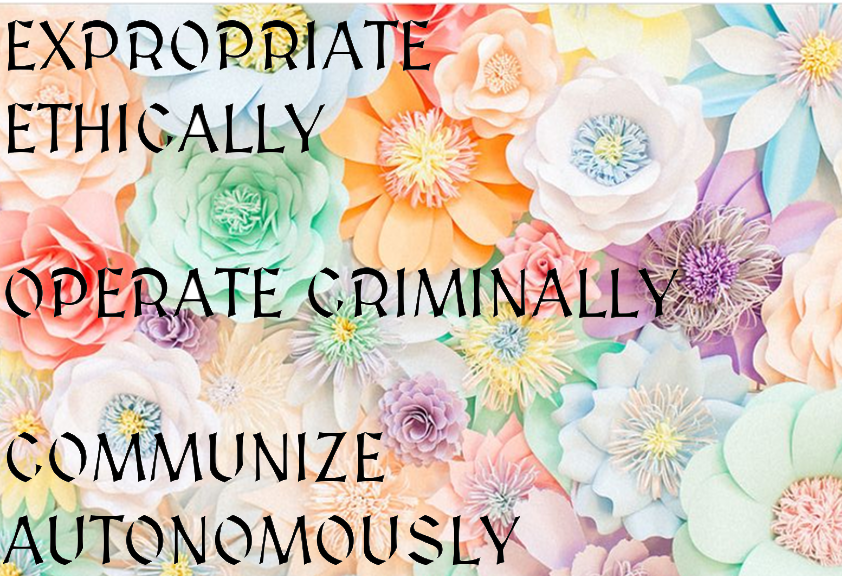 TL:DR we stole a bunch of shit from a corporate store that was clowning hip-hop and selling streetwear inspired clothes cause we hate that shit and cause we hate capitalism and cause want to keep the streets criminal, go team anarchy!

Something made our blood-boil. That’s not unusual. There’s a Columbia outdoor clothing store in downtown Seattle which currently has a window display that reads “Straight out of Portland” with some hip militant-looking streetwear behind it. Now, graffiti artists like Kidult who tag up fancy shops that have “graffiti” designs on their clothes etc, we hate seeing “street” culture commodified and pacified – especially by the very same capitalists who are helping crack down on lived street culture and especially by a bunch of rich white men who continue the colonial looting of non-white resources. To commodify anything is disgusting and to rip the criminality and conflictuality out of streetwear is not only a bad move aesthetically/effectively, but also an attempt to neutralize something that is a threat to the ruling order. Of course not all of “street” culture is desirable and not all criminals are our friends, but if there is a criminal class true anarchists most certainly are of it. And we certainly aspire to be true anarchists which is to say true criminals.

That which fundamentally comes in conflict with the ruling order is deemed criminal by the ruling order. This is the sense in which we are criminal. Not all legally criminal actions are desirable and not all legally non-criminal actions are undesirable, but at this point in time to maximize potential means to operate in the criminal realm. Being on a criminal – dare we say Illegalist – bent we decided to fight back against the recuperation/co-optation of street culture and get some loot in the process. We’ve seen what happened to rock and roll and while it’s impossible to completely prevent co-optation we can curb it and use it to our advantage. Feeling inspired we decided to embark on a campaign of expropriation;

we decided to loot back.

We managed to steal a hell of a lot of clothing using a layered foil lined bag to block the security devices on the clothes from tripping the alarm at the door, some situational awareness, sub-par acting skills, and the will to act. When we took our loot home we looked up on youtube how to remove the security device from the clothes which was hilariously easy. And then we sold most the goods on sliding scale to skate-rats which means cheap or free to broke comrades and half retail price to rich kids. We’re saying all this, because we’ve gone over the pros and cons and think that sharing a little information will help these tactics spread where desirable or better inspire people in other areas. We’ve been careful not to share too much though;

Remember, shoplifting is a risky thing. It usually pays off if you’re good at it, but it’s largely about luck. The stores want to make you feel as if someone is always watching and that alone is usually their main method of control, that is to say people self-policing themselves is what prevents most shoplifting not actual security guard intervention or whatever. This only goes so far, if you don’t want attention don’t draw attention. If you look like your looking around constantly to see if someone’s watching, concealing your face on purpose, or a pack of teenagers this may not be a good strategy if you’re trying to go unnoticed. If you’re flash mobbing in and grabbing whatever you can and dipping then you probably should think more about getting away while having all eyes on you, what you look like, or whatever than just trying to look like a normie in the store.

Just like at other direct actions where you may be on film, breaking continuity is key. It’s harder when shoplifting stealthily due to the fact you can’t walk around in all black with a mask without drawing undue attention, but you can wear a wig and sunglasses or a baseball cap. You can shave your beard for the occasion. You can wear clothes you will never wear again. This is a little extra, but some of us like to wear an outfit to bus downtown then change into another do some shopping then change back into the bus outfit once we’re a good ways away then bus back just to break continuity further.

Stealing from capitalist stores is totally chill. Property is made-up, but also the capitalist class loots the planet, steals worker’s potential, exploits the poor, and is largely responsible for the hell-scape of condos and social-death plaguing Seattle, not to mention the horrible things these corporations are doing to the global south and the daily violence of the poverty they enforce. If by stealing from them we can help support our insurgent projects and deal damage to them it’s a win-win. We’d like to be autonomous from them and not even rely on stealing from the owning class, but at this point in history we can have Nikes on our feet and a brick in our hand and rightly say we’re doing everything in our power to effectively and desirably fight back and build autonomy while looking cool as hell and not being complicit.

Hooligans are the ones who popularized a lot of the streetwear and a lot of them got their clothes by stealing them from fancy shops and though many were not acting according to a critically analyzed ethics we still place ourselves in this continuum. To us that which is produced by capitalism can be expropriated and used to actualize our desires. To us looting and shoplifting are attacks on the commodity-form for itself.

Though we did sell most of what we stole, and it may seem contradictory for anticapitalists to do such a thing, this is a means to an end for us; sadly we live under capitalism and capital is the most flexible material resource in this age so like pirates and anarchists before us we use money for subversive ends. Though there are comrades in Greece who rob stores only to distribute the goods and burn the money.

On top of obtaining resources, stealing brings us face to face with the actually existing infrastructure of class-society and property which are things like self-policing, the threat of brutalization by the justice system, security systems, and all those sorts of things. In these struggles we are reminded that law is authoritarian-control and arbitrary morality and stagnation in favor of the ruling order. We are reminded that justice was invented to settle disputes among the rich and justify whomever controlled the state and is our enemy. We are reminded that stocked shelves are guarded from the starving and empty homes are guarded from the homeless.

Petty acts of resistance also help us not crumble under the psychic weight of the everyday brutality of the ruling order. Also, distributing the loot to insurgent and mutual aid projects reminds us that hope to live the, “from each according to ability to each based on need,” dream known as communism. What we mean by communism here is not Stalinism or any other authoritarian state-socialism, but rather the coming together of comrades who hold all material things in common that is to say who share everything. We want to use resources to meet needs and build projects and property relations, markets, and things like this only get in the way. Fundamentally we can only speak for ourselves in saying that in this criminal path we are also, fundamentally, nihilists. We hold faith in nothing and reject morality, but that doesn’t mean we don’t have ethics. To us there is a difference between those two things. Morality being largely faith-based or handed down by mass-society and ethics being a critically forged theory and practice of how it is most desirable or “good” to act in what we perceive as the world. And we have also found ourselves to be, again, anarchists who reject reformism, liberalism, conservatism, statecraft, capitalism, and all other projects that hope to dominate living beings.

In our anarchic criminality we want to do away with the barrier between living and fighting. We are fighting to try to build capacity to overthrow the state and capitalism, but also to meet needs and take our lives away from the subjugation of work which, though being desirable in and of themselves, also increases our capacities.

We’ve found that moving towards communist anarchy is most desirable. Living communism and spreading anarchy has the most potential to make our dreams real and, to us, is best for living better in the immediate. We’ve also found that the criminal element is a key part of maximizing what we can do and what we get out of this trajectory. However this does not mean we look down on anyone who decides not to steal from a store or who has affinity for more anti-social anarchist trajectories. We in fact have much love for the individuals who are wary of “communism” or any overly-collective project or don’t think the rev is possible at all and just want to be weekend nihilist artists who attack what is ugly. We’re also chill with those who are down as hell, but are not in a place where stealing petty goods is a wise choice. If you feel more comfortable suing cops or getting money from the state or capitalists in some other above the board way than more power to you as long as your projects as a whole are still fundamentally conflicting with the ruling order.

Cheers to the duo who pulled off that diamond store smash and grab in Northgate, that was some Pink Panthers-ass action. Very inspiring! Hope y’all are still free and know what to do with those rocks.

See you in the streets.

~The Black Iguana Cell of the International Anarchist Insurgency

[Technical notes for the curious reader: We submitted this communique using the Tor Browser on the TAILS operating system on a public network. We ran this text and some of our previous texts through the program Anonymouth to try to catch any unknown patterns in our writing that could give us away.]