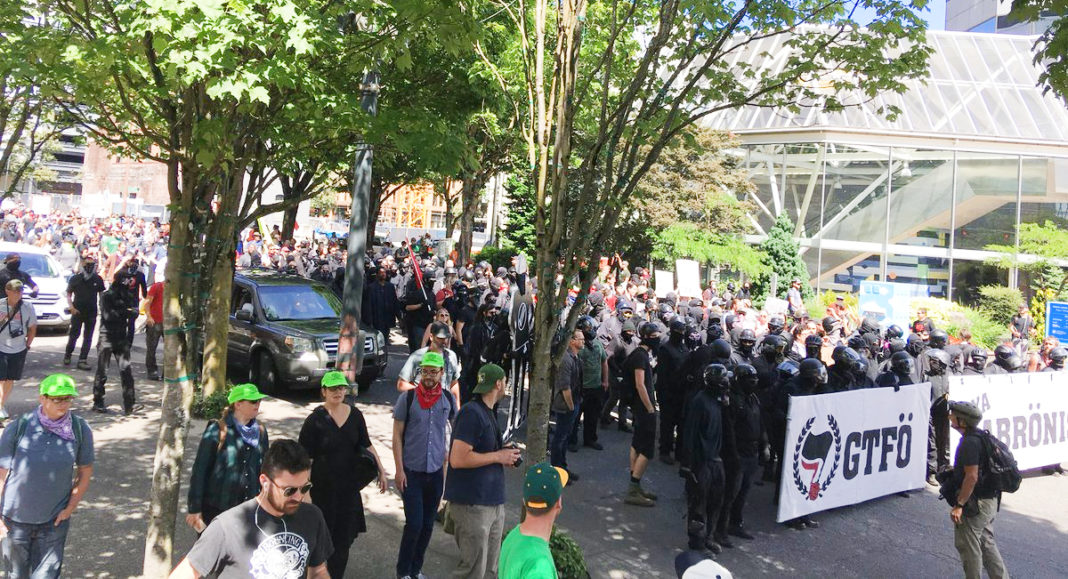 Live blog from antifascist mobilization in Portland, Oregon. This page will be updated throughout the day, refresh for updates. Check livestream from Unicorn Riot here. Cover photo used with permission from Brendan O’Connor.

10 AM (PST): Patriot Prayer attendees begin to gather to head from Vancouver, Washington to Portland, Oregon. Several attendees of the neo-Nazi demonstration Unite the Right in Charlotteville, 2017 are spotted among the crowd. Many militia members have Confederate flag patches. At one point, Patriot Prayer members refused to enter Waterfront park because they did not want to give up their guns to a weapons search.

11 AM (PST): Hundreds have gathered outside of city hall for the Pop Mob, or Popular Mobilization.

Portland PD gave Patriot Prayer an option. Hand over all weapons, flag poles and sticks or leave the park. They’re making a move to the streets right now. #DefendPDX

11:20 AM (PST): Unicorn Riot live on the scene doing a livestream. Interviewed one Patriot Prayer rally goer who stated that Unite the Right was a “conservative” event, and brushed aside the fact that people that were at Unite the Right were at the rally. Far-Right rally goes have not entered the “protest” area in order to hold onto their guns. A contingent of antifascists is gathered across the street of far-Right rally.

The PopMob (unions, DSA, ISO, etc) and antifa formations are much larger than Patriot Prayer’s crew, though people are still filtering in for each pic.twitter.com/wIlA0XDRTu

11: 40 AM (PST): Riot police have now blocked the street, with riot police deploying on both sides of the street separating the two sides. Pop Mob rally still at City Hall, Patriot Prayer rally at water front.

11: 45 AM (PST): Pop Mob mobilization moving to the water front. Police start to request that the Patriot Prayer to move into the fenced area.

A single line of riot cops on each curb separates the two groups pic.twitter.com/7PiBCVA7DE

11: 55 AM (PST): Up to 1,000 people from antifascist bloc and Pop Mob have arrived at water front to join other protesters. Patriot Prayer and the Proud Boys, almost all made up from people out of town, number significantly less, at around 200 or so according to sources on the ground.

Two sides are standing across the road from each other with a police barricades separating them. Patriot Prayer is hurtling slurs while protesters chant and play music. Counter demonstrators outnumber by many times. pic.twitter.com/TkhDwBrH7n

12: 15 PM (PST): Joey Gibson finally arrives at his own rally. Tells people to have them wait at water front because 200 more Patriot Prayer supporters are on their way to meet them.

Chants of “Union workers here to say, Nazi thugs not your day!” #AllOutPDX

12: 24 PM (PST): Shane Burley reports: “Police are now threatening dispersal weapons and ordering for dispersal of counter protesters. They say they have seen weapons, I have seen no weapons. No one is leaving it appears.”

While the police give patriot prayer and proud boys “options” for keeping their weapons and allow them to congregate while refusing to abide their own permit, they will threaten and use violence against antifascists and people standing up to white supremacy and hate.

Police are ordering protesters to leave the area as antifascist union members lead a chant of “Same struggle, same fight, workers of the world unite” pic.twitter.com/0uSiPd9PlT

12:35 PM (PST): Both sides seem to be moving now, Patriot Prayer appears to be starting to march, antifascists behind them. Police continue to threaten antifascist side with arrest. Claim they have seen weapons, while they are protecting and facilitating far-Right rally filled with people armed to the teeth. Patriot Prayer also still has not gone into their protest zone, which would mean that they would have to go through police search.

Christian had once attended a Patriot Prayer rally.

12: 58 PM (PST): Unicorn Riot stream back up. Both sides still separated with riot police continuing to form lines in the street. Unicorn Riot points out that more riot police facing the antifascist side than the far-Right side.

Joey Gibson just walked into the antifascist crowd. Police are pulling him out now. pic.twitter.com/D5sKhO7pH3

1: 19 PM (PST): Police being telling protesters to again get on the sidewalk. Unicorn Riot reports that it seems unclear as to what is going on. Both sides still separated by lines of riot police. Reports of Joey Gibson trying to go to antifascist side. Police claim they are going to open the area to vehicles.

Seems like some sort of confrontation happened, Gibson came back across the street pic.twitter.com/QjfD5PKJ1X

Forming up for the march it’s all very militaristic pic.twitter.com/lgulhQ9W26

1: 35 PM (PST): Patriot Prayer on the march now, with larger antifascist march following behind them. Police are in the middle.

Proud Boys and Patriot Prayer on the move along the river. Anti-fascists follow from across the steeet. Cops running inbetween. pic.twitter.com/ytV4wul88w

Calls for “PB” to “form a perimeter.” pic.twitter.com/Fiqwqf9JhT

Speeches, with a security perimeter on the Naito side pic.twitter.com/rNCNfU5U5e

1: 57 PM (PST): Police begin to heavily launch projectiles at antifascist counter protest. Police are saying that people must disperse or be arrested.

2: 05 PM (PST): Police are charging streets, beating people, and making violent arrests. Unicorn Riot reports “the escalation came from the police.” Police are going up street by street, pushing people back, making a bigger perimeter for the Patriot Prayer rally.

LIVE — Police have been firing riot control weapons after police escalated against the antiracist crowd – have been periodically pushing people back about a block at a time, at least one arrest in last few mins https://t.co/E1raAbOi60 pic.twitter.com/HJFgpaRT2E

2: 30 PM (PST): Police have made a dispersal order, declaring that they will arrest anyone in the streets that does not disperse. People seem to be moving back to the water front.

Police have declared a “civil disturbance” and are ordering both sides to disperse or face arrest or riot control agents and impact weapons.”