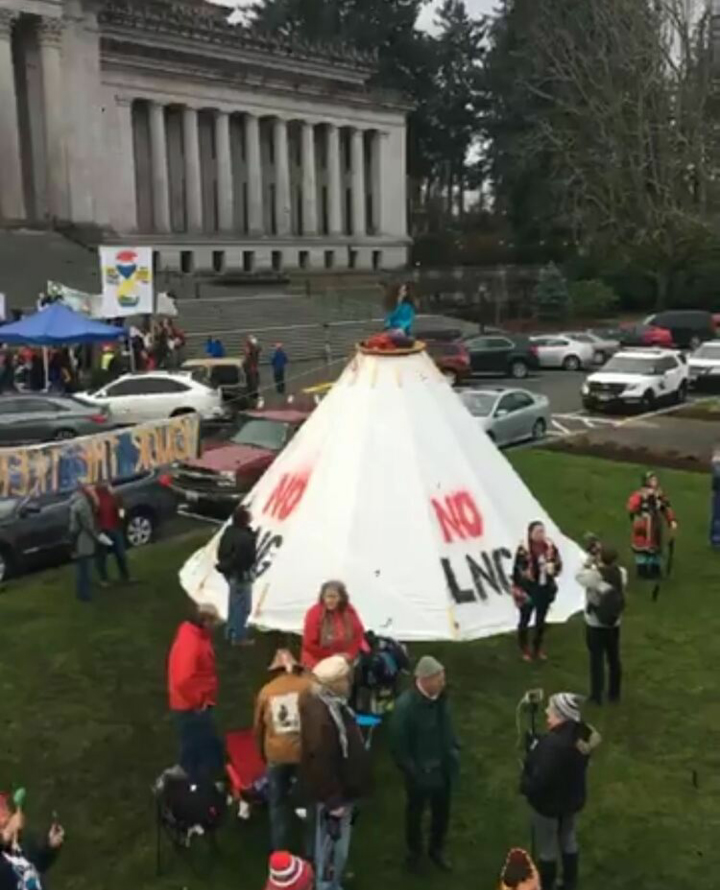 In the pre-dawn hours of the fourth day of an indigenous-led occupation of the State Capitol grounds in Olympia, WA, one Native American woman was taken out of a “tarpee” (a contemporary teepee) and arrested by state patrol troopers, while 3 other occupants were allowed to leave.

Indigenous leaders erected four of the tarpees on the State Capitol lawn early on Monday morning in anticipation of the opening of the State Legislature that same day. Their intention was to occupy the grounds to demand that treaties signed between the US government and the local Coast Salish Tribes be respected, and that the health of the Salish Sea be restored and protected.

They demanded that the State deny any remaining permits to the LNG facility being illegally built by Puget Sound Energy at the Port of Tacoma on Puyallup Treaty lands; that WA State ban Atlantic salmon net pens, which are endangering local salmon populations already at high risk; and that the State do all it can to oppose the expansion of the TransMountain pipeline across the US/Canadian border, which would profoundly endanger the Salish Sea as well as the health and subsistence of First Nations in the Salish Sea. The tarpee occupiers had been given warnings by local law enforcement at the Capitol that they had to leave their unpermitted structures or face arrest by 5pm on Monday. A small group of treaty tribe members, including Nisqually tribal representative Hanford McCloud, met with representatives of the governor in the early afternoon where Hanford McCloud presented a copy of the Medicine Creek Treaty of 1854.

Right after 5pm, the Governor’s chief of staff came down to talk with the occupiers and subsequently announced that they would be allowed to stay the night in the tarpee and that the issue would be revisited the following day. As news spread of the tarpee occupation, more and more native and non-native allies continued to gather in the evenings outside the tarpee to show support and drum, sing, and pray.

On both Tuesday and Wednesday late afternoons, Capitol law enforcement representatives once again warned that they were in violation of Capitol grounds rules and had to leave. The mostly female occupiers decided to remain in prayer until they were woken up this morning by about 2 dozen State Patrol officers (some of whom were in SWAT team gear) and asked to leave. Janene Hampton, from the Colville Okanagan Tribe, decided to remain in the tarpee and was arrested.

She was released from the Thurston County jail later this morning, charged with second degree criminal trespass. Janene said upon her release: “We are here for you and our future generations”. Paul Cheoketen Wagner, a Saanich Nation member and founder of the Protectors of the Salish Sea, said: “Governor Inslee needs to take bold action for his own children and grandchildren today. Not anytime in the future, but now. Use executive orders to stop PSE’s LNG, an illegal foreign corporation acting against the Puyallup people and everyone’s children in a collapsing climate, crashing down around us. Pass laws now that halt all fossil fuel infrastructure expansions, current and into the future.” Great article about the occupation on Aljazeera the second day.