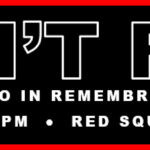 On January 20, 2017, a man rode into office on top of a not-so-subtly fascistic platform that took advantage of the festering racism and misplaced anger of white Americans. Around the country, hundreds of people protesting this were met with intense state repression, and continue to face a legal process that is transparently trying to criminalize what few avenues we still have for expressing dissent.

Here in Seattle, a racist, misogynistic transphobe with a penchant for encouraging targeted harassment of marginalized individuals, including towards a student currently attending a university he spoke at, was invited to speak at the University of Washington campus by the local College Republicans. This man, Milo Yiannopoulos, has since been outed as a pedophile with connections to overtly white nationalist individuals.

In response, many UW students and other concerned community members came to campus that evening to protest Milo’s appearance and hopefully remove his platform.

The events following were chaotic. Those on campus to see Milo began to mix freely among protesters, and conflicts arose.

While attempting to de-escalate one such conflict, our comrade and friend was shot in the chest by a Milo supporter. He nearly died.

Since that date, the University of Washington Police Department and the administration have refused to provide accountability for their incompetence on that day that allowed such a dangerous situation to occur, or for their mishandling of the ensuing investigation.

The administration, meanwhile, continues to peddle the same tired bullshit about free speech we’ve heard too many times by now. We see the administration, police, and others tripping over themselves to protect the platforms of fascists and their sympathizers, while failing to protect or aggressively repressing the right to protest against them. We remind everyone that when fascists are allowed a platform, people get hurt. We honor the memory of Heather Heyer and all those who have fallen to fascist violence.

Police never protect us, only capital and the ruling class. This year in Seattle, they murdered Charleena Lyles, a pregnant black woman and found it to be “within policy”. ACAB.

We have not forgotten any of this.

On January 20, 2018, we will hold a rally and noise demo[link: https://www.facebook.com/events/142130193155181/] on Red Square at the University of Washington at 1pm, to remember and stand in solidarity. To remind those in power that we are still here. To let all oppressed folks know: we have your backs. Bring your banners, noisemakers and friends.