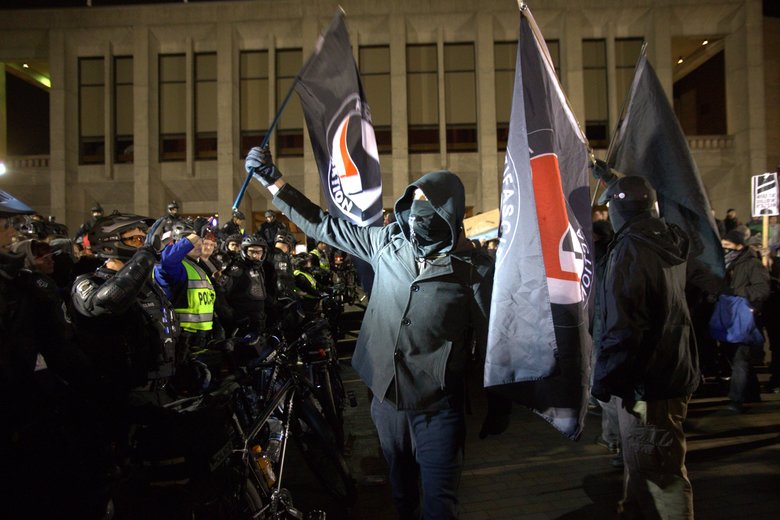 The KEXP 90.3 radio program Mind over Matters has recorded a roughly 30-minute interview with Fellow Worker Hex, the IWW and GDC member who was shot on January 20th outside of the Milo Yiannopoulos event on the campus of University of Washington, Seattle.

In this first interview with the press since the shooting, Hex talks about the experience of being shot, the importance of having a network that supports you when you are attacked, the responsibilities of firearm ownership and use, and the problems with the punitive model of justice.

We in the Twin Cities GDC salute our fellow defender and friend, continue to wish him speedy recovery, and call upon all those who oppose fascism in the Pacific Northwest to make your support of antifascist efforts known to your community. Make sure that our people are supported and defended, so that they can continue to help support and defend our communities.

Transcript:
Mike McCormick (MM): Tell us a little about yourself and how you ended up being on campus at the very well-publicized demonstration.

HEX: I had known about Milo coming to speak. I had been trying to oppose that. My partner and I had been posting things on Facebook—little things like that. I had planned on going to an action there [outside Milo’s talk]. We ended up going on vacation so I wasn’t involved in much of the organization that was happening to oppose him on campus.

At the same time, this is on Jan. 20th, Inauguration Day. There are all these huge marches against Trump. I didn’t really feel it was appropriate to oppose [Trump’s] racist authoritarianism, to oppose fascism by marching around away from a place where a fascist was speaking.

You confront [fascists] on their territory. That’s really how to deal with it from my perspective.

We got home [from vacation], the day before the [Milo] event.

The next day, I went down early to see what was happening. There was a walkout that day so I wanted to talk to some of the students.

I was there to observe the situation.

There had been some discussion that the Milo speech would be a rallying point for Neo-Nazis. We did see some folks who fit that description pretty well.

I wasn’t masked up or anything. I wasn’t hiding my identity. There was a general call-out that said to mask up, because Milo and his circus of oppression tries to find people who are unmasked and take pictures of them. They were trying to incite fear. I agree with people who did cover their faces. I was observing, I wasn’t really intending on ever actually walking into the mass of protestors. I was going to stay on the sidelines.

I saw some fights breaking out. I walked in to intervene. I ended up getting shot.

After being shot, I’m lying on the ground wondering if I’m going to survive. For a while, I was wondering whether I was going to bleed to death. If the bullet had gone through my lungs, I would [have] drowned in my own blood. I wanted to make sure that I could tell my partner one more time that I loved him them.

I was there to oppose fascism, and not just opposing Milo, but specifically the individuals who support him. And trying to talk to them. I ended up in conversation with a few of them. In these conversations, I was really just trying to understand where they were coming from.

MM: Afterwards you woke up in the hospital?

HEX: My partner waited nine hours to find out whether I was alive or dead. We had talked about getting married for the legal aspects of things. We weren’t really sure because we don’t necessarily believe in some of the state institutions or the religious aspects [of marriage]. We have some problems with the concept of marriage.

We ended up getting married in the hospital. That was really nice. It makes me really, really happy.

I spent a month in the hospital. I was pretty severely injured. There was no exit wound so I was carrying around the bullet. I believe it was a nine millimeter. We pulled it out the other day in the emergency room. The bullet came in and hit my colon, my gallbladder, my liver and poked a hole in my diaphragm. I was having a huge amount of trouble breathing. My gallbladder is gone forever. They took out a portion of my colon and sewed it back together, so I now have a semi-colon.

[He adds elsewhere, there are probably no other lasting injuries, but there is a $400,000 medical bill.]

MM: You have compassion for the person who shot you. You are seeking restorative justice. I’m wondering if you can touch on that?

HEX: I’m a human being. I’m not some wonderful saintly person. I’m angry about what somebody intentionally did to me. There’s a person who tried to take my life.

I’m actually very in support of gun rights. The shooter and I actually have a very strong intersection in terms of beliefs on that point — I don’t know about any others. I’m a very strong believer in the right-to-bear arms.

That’s really really frightening to me. I don’t think that’s something that I could ever take on. [That’s why] I don’t carry. There are people who are capable of responsibly carrying a firearm. They have to think through what it means.

The individuals identified by the media [as the suspects] are [in their] late 20s. Prison potentially ruins the rest of their lives. Or they end up with this mark that makes it impossible to get a job. We are talking about potentially ruining the lives of people who are human beings. Human beings make mistakes, really stupid mistakes. I know I have done really stupid things. I have to be compassionate.

Punishment-based justice doesn’t produce “justice.” It doesn’t teach people what they did wrong. Think about anytime you have been punished for something. When you were a little kid, what did that teach you. It didn’t teach you to not to steal from the cookie jar. It taught you not to get caught stealing from the cookie jar.

[The shooters and I] can talk through things. That may take a really long time, but I think we can come to agreement about what the right thing to do was in this situation.

Some of this comes from my following the Twitter of “Block the Bunker” and “No New Youth Jail.” Some of those folks have called for alternatives to police. They are coming at it from the perspective of people being actively harmed in their communities. For me, it’s just not what I believe in and I don’t think it’s efficient [he may say: sufficient]. We have very different perspectives on why but are very aligned on the what.