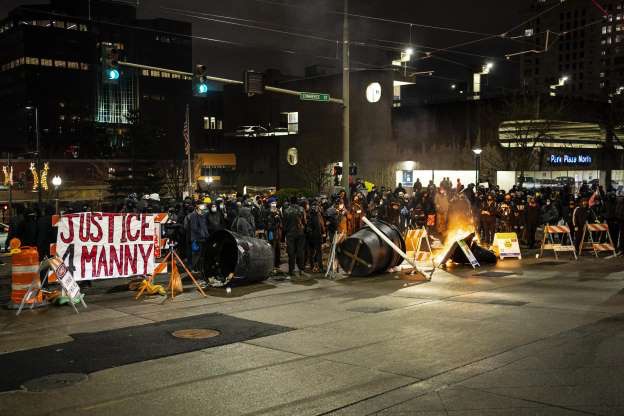 After a pig drove through a crowd of people with a police vehicle, militants set flaming barricades and smashed windows of Pierce County Corrections jail in Tacoma, Washington on Sunday night.

More than 100 people gathered at the same intersection where the pig car attack took place the previous night.

On Saturday evening, the police officer drove into a crowd of people near S 9th Street and Pacific Avenue and ran over at least one person before driving off.

Two people were hospitalized with injuries that weren’t life-threatening and one has since been discharged.

Protesters also called for justice for Manuel Ellis, a Black man who was murdered by police in Tacoma last March.

Buildings and cars were attacked by militants who moved through downtown Tacoma. Trash was set ablaze in the street.

Revolutionaries also gathered outside Pierce County Jail, where they rattled fences and chanted “Free them all!” Windows of jail buildings were also smashed by militants.