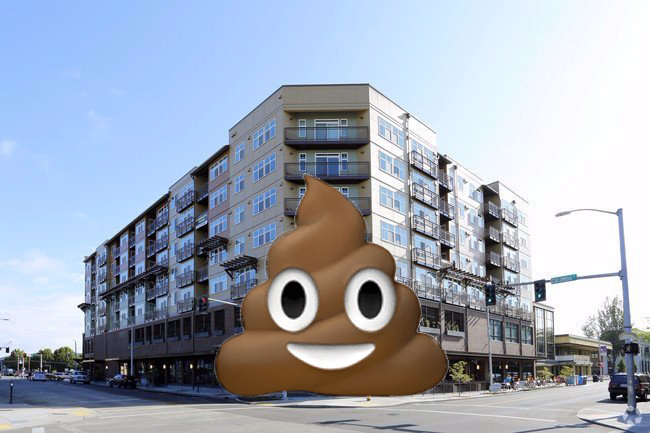 On May 2nd a little after 9pm a group of 30 or so gathered in downtown Olympia for a late May Day march holding a banner reading “Fuck Your Yuppie Bullshit.” We started at the west end of 4th avenue and made our way east. A group held the one lane of the street letting cars pass on the left so as to avoid confrontations with motorists. The march was quiet with about as many on the sidewalks as on the street. No one chanted though people did take time to pass out fliers to onlookers to explain what was going on.

Some on the sidewalk took the opportunity to beautify downtown by spray painting anarchist messages including, “Happy May Day,” “Stolen Land” and “Kill Cops”, along with many of the usual “ACAB” and “FTP”.  Others used spray foam insulation placed inside the credit card slots to disable parking meters along the march. Olympia’s high tech parking meters are a scheme to lure development and customers to downtown and are a revenue source for the city and the police.

When the march reached 123 4th Avenue, a new and loathsome condo that markets to yuppies it was tagged with messages of “fuck you” and “fuck this.” One of the windows at the condo was broken out and the march continued up 4th writing more graffiti. When the group passed US Bank many more windows were smashed out. Soon after, at 4th and Franklin when people passed the vacant unit that used to house the Downtown Ambassadors’ “welcome center”, the giant window there was broken with exuberance. The covered doorway to the “welcome center” used to be a place where houseless people could sleep at night, but recently the owners of the building put up a floor to ceiling chain link fence so that no one can sleep in the doorway. This is obviously a cruel example of the callous oppressive bullshit that those who own property downtown inflict on those whose existence they deem inconvenient.

After that the march continued about a half block up and dispersed into the night.  To quote from the Olympia Police Twitter:

“No arrests as of now. The group disappeared as quickly as they came together. We will prevent additional damage tonight and assess things in the morning.”

45 minutes after the march had ended OPD could be seen suited up in riot gear wandering around hoping to inspire the feeling that they are in control. The Washington State Patrol plane that had flown the day before and at the blockade, started circling around again. Despite all of this repressive force, with a little bit of creativity we were able to celebrate May Day in a way that we hope would make the Chicago martyrs proud.

This march clearly took the police by surprise. They had dumped countless resources the day before into preventing any protest from forming, yet we succeeded in celebrating May Day a day later. It’s important to adapt to changing conditions and the authors of this report back hope that this type of action will be just the beginning of more unpredictable anti-capitalist resistance.

The passion for destruction is also a creative passion. -Mikhail Bakunin

The flier that was handed out read:

Rapid gentrification is happening right before our eyes; with a new condo being approved what feels like every month, rent hikes and evictions, raids on houseless encampments, and the general displacement of the houseless community. All of this, paired with increased police patrols which serve no purpose but to harass the houseless, exploitive small businesses who are always eager to call the pigs and “clean teams” who hurry to wash away any voices of dissent. The forces of order in the city are working at breakneck speed to sanitize everything and create the image of a pristine yuppie dystopia. This shiny veneer can’t hide the brutality and subjugation that makes it possible. The killing of Vaneesa Hopson by OPD and paramedics just months ago, and the police shooting of Andre and Bryson in 2015 are just two examples of the world they want. You want a spotless City to be enjoyed by an elite few… we’re going to take a dump on it!

This town is home to a beautiful amalgam of freaks and wonderful people, but it’s also fraught with a whole lot of bullshit. Since the first white settlers waged the Puget Sound war to steal this land from the Squaxin and Nisqually people, this area that we now call our home is a place of intense oppression and exploitation. But with it comes inspiring resistance and vibrant attempts to live contrary to the dictates of the rulers. Another world is possible.

Something has to change, and the secret is to really begin.