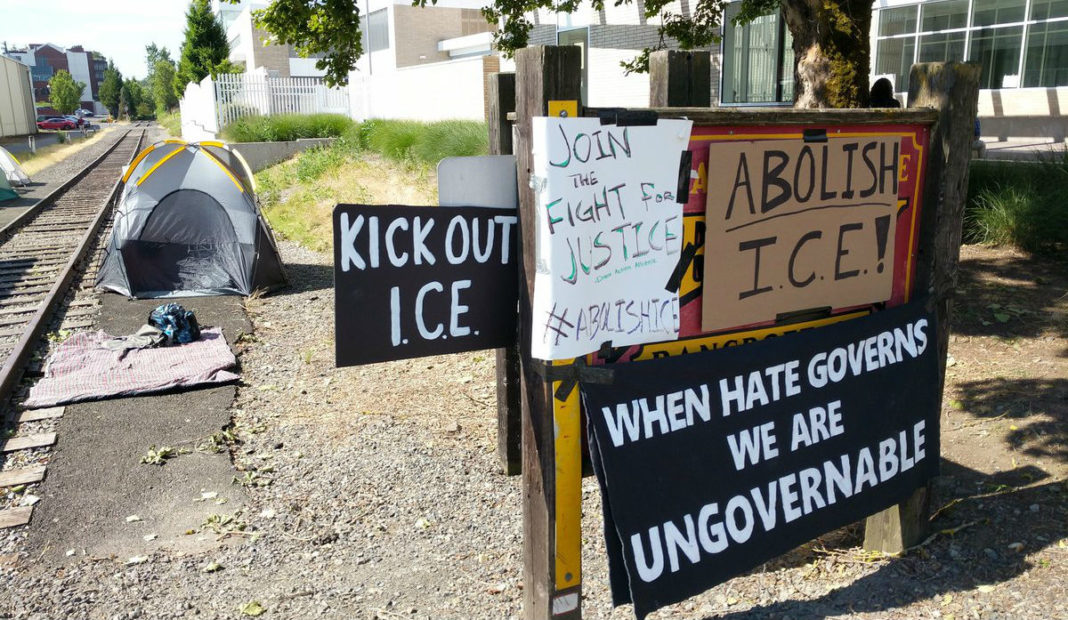 Beginning on Sunday, June 17th, community members from all walks of life, working together with the Direct Action Alliance, Portland Assembly, and the Portland Democratic Socialists of America, organized a protest in the area around an ICE facility in southwest Portland with legal support provided by the National Lawyers Guild, to protest the Trump administration’s monstrous and inhumane policy of separating children from their families at the border. The protest, located at 4310 SW Macadam, has quickly developed into an occupation, with tents, supplies, facilities, and even a tiny library. On Tuesday night the occupiers committed to staying there until concrete and meaningful action is taken to reunite these families, and since Wednesday the facility has been rendered inoperative. Though there have been confrontations with police and DHS, police repression has remained minimal.

Now a few days into the occupation, what started as dozens of protesters has grown to as many as a few hundred spread across multiple encampments outside the building. We are calling on activists across the country to establish their own occupations to abolish ICE. Wherever ICE agents dare to show their faces, they must be challenged and shamed for carrying out this fascist policy. Since instituting the zero-tolerance policy, over 2,000 children have been separated from their parents, and many may never be reunited with their parents, as there is no system in place to bring them back together. There are over 11,000 immigrant children currently housed in government shelters, many of whom are here because they are fleeing violence in countries destabilized by this country’s own imperial apparatus.

Many of these migrants are seeking asylum, and separating their children displays the rank cruelty of this policy and exposes the evil intent behind it. This is not about protecting citizens or securing the border, it is about punishing those who come with dreams of peace and a better future. These children are being held in cages, forbidden to speak to their parents, denied human touch and compassion — the trauma will last a lifetime.

Make no mistake, ICE is a white supremacist organization following the orders of a white supremacist administration, and the intent of these policies is to discourage all nonwhite immigration, legal and illegal, and to preserve the power of the rapidly shrinking white majority. It is not only possible to imagine a world without ICE, an organization which has only existed for the last 15 years, but necessary and our duty to make it a reality.

Portland has declared itself a sanctuary city, but this facility stands in the way of that. Thanks to the tireless work of the community and occupiers, this facility has been temporarily shut down by community members, but we request that the city seal the doors once and for all. Furthermore, the gates to our country must be opened, not closed. This means an immediate halt to the fascist policies accelerated by Trump, and new beginnings that actually allow people escaping violence an opportunity.

We invite the rest of the country to join this movement, to gather and occupy your local ICE facility until it’s shut down. Bring candles, signs, noisemakers, and tents. Most importantly, bring yourself. Even if you can only come down for a day, for an hour, your presence is important and needed. It takes ALL of us working together to stop this machine of terror.