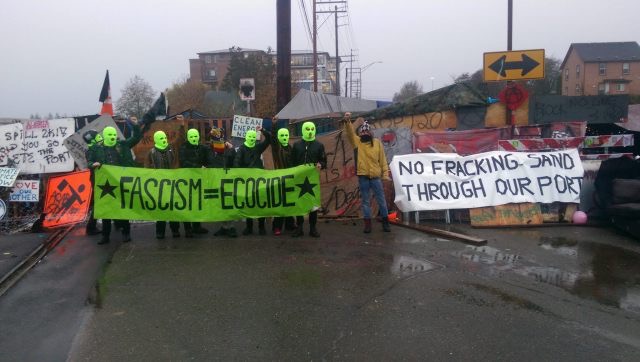 ( a letter from the Olympia Commune to the so-called City of Olympia, Wa., undated)

some of us at the Olympia Commune have come to the understanding that “no demands” is an incoherent strategy which does not lend itself to “”progress”” or “”results”” with this bright, new understanding, we have investigated our desires and come up with some ideas about what we really want the result of this blockade to be

our demands are innumerable; here are just a few:

1. make the port a beach again
2. blow up the sun
3. the complete destruction of time itself
4. a brick for every window
5. a wrecking ball
6. that, while science still exists, one of us be endowed with an Adamantium laced skeleton
7. a swift and brutal end to the exploitation commonly referred to as “science”
8. the destruction of all dams, and the return of the salmon
9. no motor boats ever again
10. that fascists and politicians spontaneously combust
11. compost the police
12. release of all prisoners and the Total Destruction of prison, in all of its forms
13. cessation of all space exploration
14. the return of the Tasmanian wolf, the aurochs, the dodo bird, the coral reefs, and all other creatures and habitats that have ceased to be
15. the wilderness
16. total freedom
17.
18. the liquidation of Pacific Union’s assets, to be equally distributed among all children
19. mandatory clown uniforms for all Olympia parking employees
20. that steve hall fight a bear